Detailed hi-res maps of Groningen for download or print 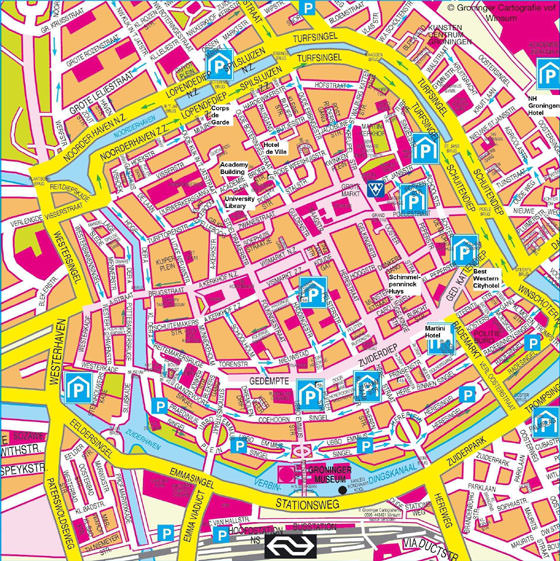 Search for services, infrastructure and sights on map of Groningen

Our guide chapters over Groningen

The beautiful church was built over five hundred years ago and its premises store many interesting religious artifacts. The walls of the church are decorated with beautiful frescoes, which are the result of work of the 13th century masters. The main hall of the church has become home to a huge baroque organ, the largest one in Northern Europe. Museum Groninger is one of the most noteworthy cultural institutions of … Open

If you'd rather prefer to watch some latest movies, feel free to go to the best suitable places - namely, to Groninger Forum or Kinepolis. If there is a desire to enjoy theater productions or opera, many people go to the Grand Theater. Here is another place where interesting performances often take place, and its name is De Oosterpoort. Football fans prefer to watch their favorite game at Noordlease Stadion where … Open

The basis of the menu of Le Marronnier up restaurant is represented by French cuisine. The dining facility offers a rich selection of wine, which is delivered from various French provinces. There are also restaurants dedicated to Thai cuisine in the city. Thai Jasmine is probably the most popular one. The restaurant’s hall is decorated with unique national decor items. This is a great place to relax after a … Open

Traditions and mentality of Groningen

November 11, the day of St. Martin, and December 6 – the day of St. Nicholas are no less popular holidays. These celebrations are always accompanied by colorful festivals, fairs and street performances. Special food is, without a doubt, an important attribute of holidays. You can try it in numerous outdoor cafes. During the days of celebrations you can easily find noisy processions of mummers who sing songs and … Open

In the immediate vicinity of Groningen, there is a unique historical monument – Fort Bourtange. This majestic fortress was founded in 1593 and has a very unusual architectural form. The fort is built in the form of a star. Today, it houses an interesting historical museum. Several years ago, a major reconstruction of the fort was completed, during which not only the old buildings were rebuilt, but also the … Open