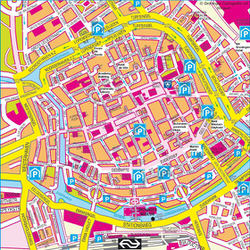 Interactive maps of hiking and biking routes around Groningen

1. You can zoom in/out using your mouse wheel, as well as move the map of Groningen with your mouse.
2. This interactive map presents two modes: 'Biking Routes' and 'Hiking Routes'. Use the '+' button on the map to switch between them.

This Groningen map has two modes: 'Railway Network' and 'Landscape & Rural Map'. Use the '+' button on the map to navigate.

Our guide to Groningen

Tourists are attracted to boekhandel De wijde wereld bookstore by carefully arranged posters with postcards at the entrance. This store is located on the first floor of a beautiful historic building and presents a large choice of modern books. They have interesting accessories for reading, as well. Wooden bookmarks and special pencils to make notes in books are always on offer. The most picturesque and interesting … Open

6. Bus is known as the main form of public transport. You can use it to get not only to all parts of the city, but also to the city’s suburbs. Tourists who arrive in Groningen for the first time are recommended to buy a city map that depicts all main public transport routes. 7. Service charges are already included in the total bill in the majority of restaurants. As a rule, the amount of … Open

The most important holiday in all the Netherlands is, of course, April 27, when Koningsdag takes place. At this time, besides the main festivities, you can witness noisy afterparties with the participation of some of the most prominent names of the Netherlands - among headliners, there are no performers whose names wouldn't be known even to those who're not really fond of electronic music. The celebration … Open