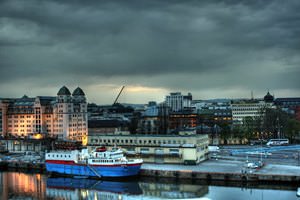 Oslo is the most interesting city of the country from the excursion point of view. On the territory of the city you will find widest selection of grandiose historical monuments, beautiful parks and museums. The local city Hall (Oslo Rådhus) is a prominent architectural monument. This is a building made of red brick and notable for its strict lines – a true elegant architectural monument of the 20th century. Besides a visual inspection of the attraction, tourists are recommended to go inside and examine halls. The rooms of the building are decorated with beautiful frescoes and tapestries, and its patio is notable because of an amazingly beautiful fountain Dyre Vaa.
Authentic traditions, festivals and lifestyle of Oslo inhabitants
The ancient Vikings' city of Oslo is rich not only with natural beauties, but also with numerous traditions, customs, and beliefs. Norwegian society in general - is a set of quiet and …

Open
Government House is one of the main symbols of Oslo. The building was built in 1958. It is characterized by severe and stately look; Government House has full right to be called a model of high style. Among the cultural institutions of the city visitors are recommended to visit a popular Viking Ship Museum, which is located on Bygdoy Peninsula. The museum exhibits a unique collection of historic ships that have been made by the Vikings centuries ago. Oseberg Viking Ship is considered the oldest exhibit of the museum - it was built in the 9th century. The National Gallery has a rich collection of paintings by Norwegian painters. Among the items of the priceless collection of art you will see the works of Matisse and Cezanne. A part of the exhibition is occupied by a collection of sculptures of the end of the 19th century.
The guests of the city should definitely not forget to visit the Royal Castle, which was built in the middle of the 19th century. Many people say that it has much similar with White House, and some compare it to an old mansion of nobles. The magnificent monument is surrounded by century-old gardens. The main street of the city is called Karl Johans Gate. While walking through it you will see several important places of attraction of the city. On this street are located National Theatre and the building of Parliament, as well as popular restaurants, luxury shops and art studios. Copyright www.orangesmile.com
Your active city break in Oslo. Attractions, recreation and entertainment - best places to spend your day and night here
In Oslo you will find more than one hundred of various nightclubs and entertaining facilities. Among them there are romantic and cozy bars, colorful discos and elite nightclubs. Smuget, …

Open
Det Kongelige Slott, considered the most modest palace in Europe, still fascinates the imagination of visitors from the very first minutes they set eyes on it. It is certainly worth visiting, at least for the sake of the atmosphere of peace that reigns in it – it seems as though, it is only enough to take a glance at the building to appreciate it. There are lots of flowers around the garden, which gives a special highlight to the place. Situated not far from the palace is Litteraturhuset, which is without a doubt the largest literature house today. You can read your favorite book in a cafe here, while writers can work and organize meet-and-greets. As a matter of fact, this is the place where all the creative people in Oslo come together.

Lovers of mysticism and “sad romance” converge in the cemetery Vår Frelsers gravlund. The fact is that this is the most beautiful cemetery in the entire city, with each tombstone having its own unique style. It was built in the beginning of the 19th century, because it was at that time the epidemic of cholera broke out. Many famous people like Edvard Munch (whose museum can be found between the parks Botanisk hage and Tøyen) and Henrik Ibsen, were buried here. Oscarshall is considered quite interesting from an architectural point of view. The time of its construction dates back to the beginning of the 18th century. It is the summer residence of King Oscar and one of the vivid examples of neo-Gothic buildings.
Advices to travellers: what you should know while being in Oslo
1. Vast majority of hotels, restaurants and shopping centers accept payments by international credit cards, so taking much cash is not necessary. 2. The weather in the city is quickly …

Open
Among the museums worth visiting a priori on arriving in the city, it is worth noting the Fram Museum. It is a ship exploring the South and North Poles, which you can climb and feel like Rual Amundsen or Fridtjof Nansen. The truth is that even the weather conditions of extreme poles are simulated here. You will definitely find interesting the Astrup Fearnley Museum of Modern Art, which contains works by famous contemporary artists. In the Norsk Folkemuseum, you can find out everything about the life of the people who inhabited Norway at one time or another. It is thus compulsory to visit it in order to get acquainted with the local culture. 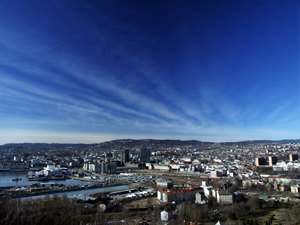 A truly unusual place can be found on Grimelundsveien 8, where the Emanuel Vigeland Museum is located (it is not to be confused with Gustav Vigeland, whose sculptures adorns another interesting place in Oslo – Frogner Park). This mystical place became a pilgrimage site for many lovers of mysterious atmosphere. Sunlight does not penetrate it, and the room itself is very poorly illuminated. On the floor are frescoes depicting a person’s life from the moment of conception right until death. All this put together creates a mystical effect, and it is very difficult to imagine a more mysterious place.

In the section below, you can get one of our excursion, activities or city discovery tours over Oslo and surroundings. Our website offers 10-30% lower ticket prices, when compared to the offline purchase on the spot.

This guide to cultural sights Oslo is protected by the copyright law. You can re-publish this content with mandatory attribution: direct and active hyperlink to www.orangesmile.com.
Oslo - guide chapters 1 2 3 4 5 6 7 8 9 10 11 12 13 14

What to visit during two-day excursion in Oslo

Public palaces near Oslo
♥   Palace 'Royal Palace' Oslo, 1.3 km from the center. On the map

Art galleries in Oslo and around
♥   Art museum 'National Museum of Art' Oslo, 0.7 km from the center. On the map

♥   Art museum 'Architecture and Design' Oslo, 0.9 km from the center. On the map 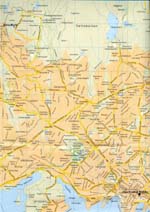 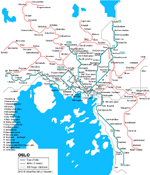 Photogallery of cultural heritage of Oslo

Excursions over cultural sights of neighbours of Oslo

Larvik
The city also boasts several beautiful historic churches. From an architectural point of view, Fredriksvern is of the greatest interest. This miniature church is remarkable for the colorful decoration of its facade, which is painted in various shades of red and yellow. The bright building looks more like an old mansion housing a valuable collection of religious relics within ... Open »
Lillehammer
A vivid 18th-century architectural monument is Sor-Fron Kirke, a church located in the immediate vicinity of the city amidst beautiful natural landscapes. The construction of the church was completed in 1787. According to historical data, the very first church was built in its place about 500 years earlier. Over time, the old wooden church became dilapidated so it was decided ... Open »
Goteborg
You will find Slottsskogen (Palace Park) not far away from the fishing port. This is the most large-scale and beautiful park in Gothenburg. During a walk through the picturesque alleys of the park travelers should definitely not forget to visit Marine Tower, the top of which is equipped with a beautiful viewing platform. The height of the tower estimates 62 meters. Its top is ... Open »
Bergen
St. Mary’s Church is a truly unique attraction. The beautiful cathedral was built in the 12th century. Surprisingly, the building has managed to preserve in its original form till our days. If the appearance of the building hasn’t been changed within 800 years is a wonderful example of Romanesque style, its inner premises have been remade several times during the history ... Open »
Alborg
An equally interesting historical monument is Aalborghus Slot Castle, which is considered a unique example of half-timbered architecture. The construction of the castle took place in the middle of the 16th century. It was originally built for defensive purposes. Later, the castle was declared unsuitable for military purposes and converted into a royal residence. After its ... Open »
Vasteras
It is important to mention that all historical landmarks of Vasteras are located in its older part. The “old town” is rather small and it is easy to explore it on foot in just one day. The district of Kyrkbacken looks particularly appealing to tourists. It is a charming area with wooden houses, picturesque parks, and green streets. In the 12th century, Kyrkbacken was the ... Open »

Culture guide to Oslo. Which fascinating sights to visit once you are in Oslo: temples, churches, museums, theaters and castles. Recommendations (with addresses, phone numbers and links) on the places 'must visit' in Oslo. Plan your own city excursion by using this page info!