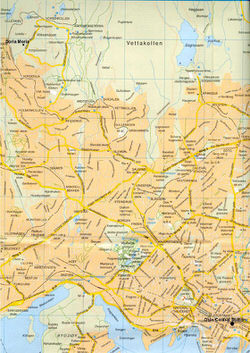 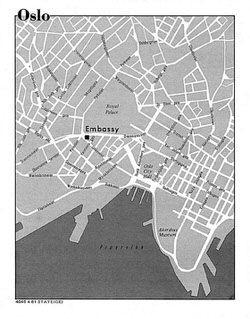 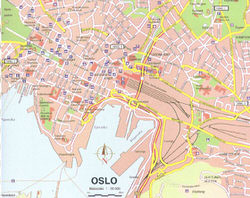 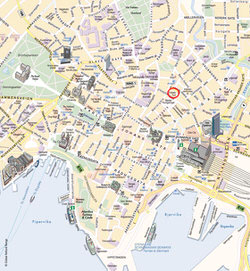 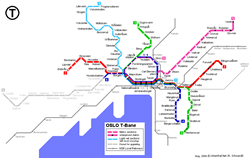 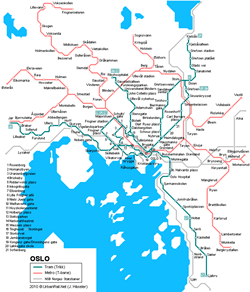 Interactive maps of hiking and biking routes around Oslo

1. You can zoom in/out using your mouse wheel, as well as move the map of Oslo with your mouse.
2. This interactive map presents two modes: 'Biking Routes' and 'Hiking Routes'. Use the '+' button on the map to switch between them.

This Oslo map has two modes: 'Railway Network' and 'Landscape & Rural Map'. Use the '+' button on the map to navigate.

Norway - moving around the country

The terrain in most regions is very difficult, so on the way you will often find narrow tunnels, bridges and sharp turns. This is why it is necessary to strictly adhere to the speed regulations and pay close attention to the road signs. In Norway, there are huge fines for seat belt defaulters, as well as for driving in a state of intoxication. There is also taxi service in the country, but it is expensive. They can be stopped right on the street or ordered over the phone. As a rule, taxis work only within the boundaries of one city. The cost for a pick-up is 3 Euros and for each kilometer ride, you will have to pay about one and a half Euros. Quite often tourists choose to move around by train. There are also high-speed regional express trains and local passenger trains. The fare depends on the class of the wagon. You can buy a ticket online or in the booking office of the railway station. … Open

Overview of festivals and celebrations in Norway

Just like many other countries, Christmas is one of the most important and large-scale holidays for Norway. The Norwegian name for Christmas is Yule. It is celebrated on the 25th of December. On this day, traditional ceremonies dedicated to the Norwegian Santa Claus, Julenissen are held. Christmas holidays last until 13th of January. Within the duration of the festivities, all sorts of masquerades, hymns, reindeer runs, cross-country skiing, and “Yule goat”, which may be compared with Russian Kolyadka goat, are often held. … Open

Our guide to Oslo

Steen&Strom is considered the most “Norwegian” shopping center in Oslo. At Steen&Strom, you will find only goods that were produced in the territory of Norway. For instance, this is the place to shop for traditional wool winter hats and sweaters with national patterns or find interesting artworks, such as popular troll figurines. The price of items sold in this shopping center is very different. Both fans of … Open

Hotels with history of Oslo

The beautiful Hotel Bristol is also in the list of the most beautiful historic hotels in Oslo. It greeted first guests yet at the beginning of the 20th century. Nowadays, clients of the hotel can choose from more than 250 spacious rooms with antique furniture. The Library bar remains one of the main elements of the infrastructure. Open in 1920, the bar has quickly become a favorite place to relax for famous … Open

3. Travelling on suburban roads of Oslo independently is rather difficult. The roads here are very narrow and in some areas they resemble serpentine. 4. Drivers should keep in minds that either in the territory of the city or in its suburbs the roads are equipped with security cameras. Even the slightest excess of speed will be certainly fixed, and the penalty for violating traffic rules will be … Open

During the summer months, the North Sea is warm, which means that it's a perfect time come here to Oslo for a summer vacation. During Norwegian summertime, you have awesome opportunities for sunbathing and swimming, especially perform diving is specially equipped areas for this purpose. One of the most favorite beaches among locals is the Huk, which is located about ten meters from the Paradisbukta strand beach. On … Open

Weekend in Oslo in original style

If you are a discerning and upscale lady who is used to buying clothes in best boutiques, don’t forget to visit Monki. The design of this shop is reminiscent of a modern art gallery because of bright colors and stylish illumination. Under the shade of colorful lamps and among bright partitions, it will be even more interesting to shop new accessories. When your craving for new gastronomic experiences has … Open

Festivals and events in Oslo

Not surprising that during Christmas holidays, the Norwegian capital becomes absolutely beautiful. The preparation for these holidays starts very early. The city is decorated natural huge Christmas tree and lights of garlands. During all December and early January, you will be able to enjoy numerous Christmas fairs, where you can buy the main Norwegian Christmas treat - ginger biscuits. The most spectacular and … Open