Detailed hi-res maps of Den Bosch for download or print 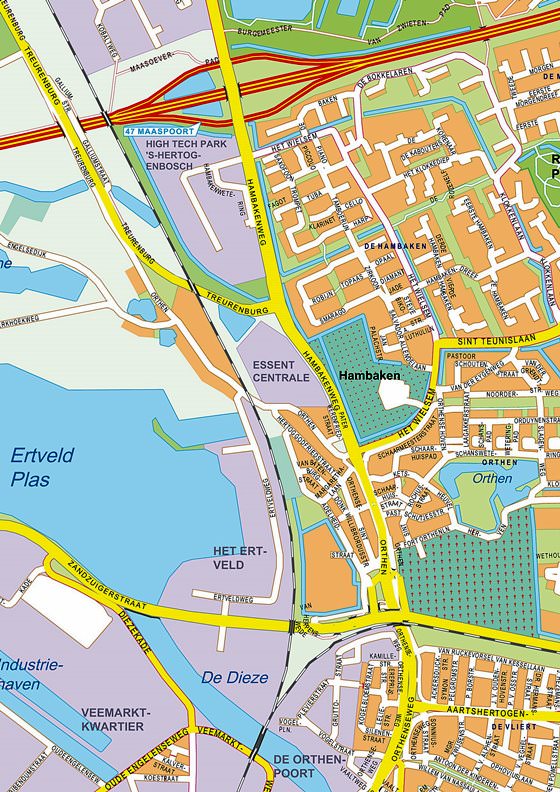 Search for services, infrastructure and sights on map of Den Bosch

Our guide chapters over Den Bosch

Bossche Suites is another hotel which was also opened in a renovated building with a centuries-old history. The hotel offers couples the opportunity to choose from among its four stylish design rooms. One of the rooms has an original open-plan bathroom, while another carefully preserved the original elements of wood trim. There is as well a very attractive room with an attic ceiling, which is located on the top … Open

Festivals and events in Den Bosch

The beginning of July in Den Bosch is marked by Trek-’S-Hertogenbosch. This is another major open-air gastronomic event that takes place on the central streets of the city - Onderwijsboulevard and Jonkerstraat. The festival is free, the atmosphere is as relaxed as possible, and tasting delicious food is accompanied by listening to music (jazz, funk, soul) and watching theatrical performances. Heavy metal is … Open

Bars located on the territory of Den Bosch invite many travelers to have a good time. Thus, wine lovers go to Wijnlokaal 073, those who dream of tasty and hearty food are frequent guests at the best place for this - namely, at Bij Dirk. Sports fans head to The Legends Sports Bar to have a beer or three while watching their favorite sports, and for those who want to sit in a relaxed atmosphere, it wouldn't hurt to … Open

6. Despite the fact that the use of soft drugs is permitted throughout the country, it is strictly prohibited to export them. Marijuana should be bought only in coffee shops. It's recommended to refuser the services of any individuals. 7. Drugs and alcoholic beverages are only sold to persons over the age of 18. Younger people are not allowed to visit coffee shops. As for the use of alcoholic beverages, there … Open

Ladies will be curious about Fuente store. It presents stylish clothes of the highest quality. They sell colorful tunics and dresses, elegant outfits for every day, and very comfortable clothes for outdoor activities and walks in the park. Besides clothing, they have beautiful shawls, hats, handbags and costume jewelry. You'll pick out clothes for special occasions, as well. For trendy clothes in modern style go … Open

The modest hotel, B&B St. Josephstraat, also stands out thanks to a unique and charming design. It is ready to offer its guests only one double room, whose atmosphere is truly inimitable. The interior is based on strict black and white colors and is complemented by colorful designer accessories. An original bright chandelier with an abundance of colorful pendalogues, as well as luxurious bright fabrics and pillows, … Open