Detailed hi-res maps of Breda for download or print 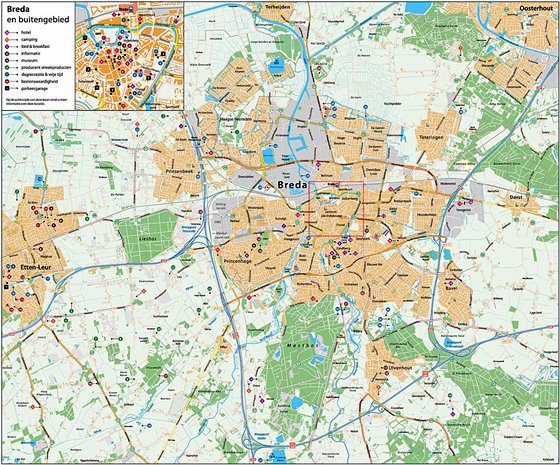 Search for services, infrastructure and sights on map of Breda

Our guide chapters over Breda

1. It is allowed to exchange money in banks, special exchange offices, and postal offices. The majority of banks open at 9 am and serve clients until 4 pm. Friday usually has shorter working hours. Exchange offices can work up to 8 pm but, as a rule, they offer a less beneficial exchange rate. 2. The city has a well-developed public transport system. It is possible to buy tickets in tobacco kiosks … Open

Superior double rooms can also be found in comfortable Bastion Hotel Breda located in a very quiet and picturesque district of Breda. The hotel is deservedly popular among young couples, there is a stylish bar with a huge selection of beers and author's snacks within its walls. Spend time in an intimate setting in its stylish rooms that feature panoramic windows and passionate cherry fabrics. One of the city's … Open

Ginnekenweg is one of the main shopping streets of Breda. It is difficult to imagine a category of shops that could not be found here. The busy street houses several popular clothing stores, lovely bookshops with original souvenirs for tourists. There are some nice antique shops, as well as art galleries and craft workshops, where local craftsmen produce their unique masterpieces. On this picturesque street you can … Open

Budget Premiere Classe Hotel Breda can offer a stylish situation as well. Its minimalist-style rooms are dominated by white and red colors. A necessary attribute of all the rooms is large modern beds, while some family rooms are furnished with bunk beds. The modern hotel is characterized by very harmonious and cheerful atmosphere. Bed and Breakfast Breda Lieu de Ruse is interesting for its non-standard design. … Open

Breda for children - what to visit

The city has several beautiful playgrounds and centers, the largest and brightest center among which is Joepie! Binnenspeeltuin. It is aimed at young children. For them, there are many game rooms with inflatable attractions, slides, dry pools and labyrinths. This gaming center is distinguished by its magnificent design. There are playgrounds for both very young and older children. Game zones in this center are … Open

Travelers who do not save on accommodation and prefer the most prestigious hotels should not ignore Golden Tulip Keyser Breda Centre. This hotel is within walking distance of the Grote Markt and other iconic tourist sites. It guests can choose from 80 rooms, all of which are distinguished by an impressive scale and a first-class technical equipment. Large panoramic windows, stylish designer furniture, a huge marble … Open