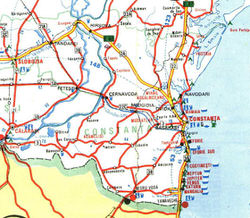 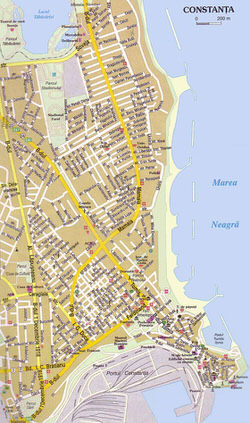 Interactive maps of hiking and biking routes around Constanta

1. You can zoom in/out using your mouse wheel, as well as move the map of Constanta with your mouse.
2. This interactive map presents two modes: 'Biking Routes' and 'Hiking Routes'. Use the '+' button on the map to switch between them.

This Constanta map has two modes: 'Railway Network' and 'Landscape & Rural Map'. Use the '+' button on the map to navigate.

Romania - moving around the country

The quality of roads in Romania is quite bad, there is no lighting, and sometimes there are no markings or road signs. However, you can rent a vehicle in major cities. In order to do this, you will need an international driver’s license and a credit card. Also, the driver must be over 21 years old. The average cost of renting a car is 30 Euros per day. There are taxis, and even municipal taxi companies in most cities. Basically, payment is made according to the meter. Despite the fact that there are several airports operating on the territory of Romania, domestic air traffic is still poorly developed. The flight costs an average of $80, which is very expensive for a small country. … Open

Nature and parks of Romania

The climate of this Southern Country is not homogeneous. The areas near the Carpathian Mountains are pleasing to residents with hot summer and cold winter. The change of seasons is rapid and noticeable. For example, the temperature in summer can rise to as high as 38°C and yet drop to -32°C at the end of autumn. The climate in the plains is milder, continental, and the change of seasons passes gently and gradually; without noticeable temperature changes. … Open

Our guide to Constanta

Don't miss your chance to explore Microrezervație, a mini-zoo where visitors can see black swans, wolves, ducks, foxes, llamas. It is noteworthy that conditions created here are as close as possible to the comfortable natural habitats, in which the wild animals live. Special playgrounds are equipped here for children - all so that no one can complain about the lack of entertainment. After visiting the zoo, … Open

8. It’s most profitable to pay in the national currency; money can be exchanged at a bank or exchange centers. As a rule, the closer to the hotel the exchange point is, the less favorable conditions would be there. In banks exchange rates are about the same. 9. Main voltage is 220 V. If some appliances need adapters, you can ask for it in a hotel, or buy one in supply stores. 7. Going … Open

Ladies who are keen on needlework must visit Mercerie. This shop is a real paradise for those enthusiastic about knitting and stitching. Mercerie has a wide selection of high-quality locally produced yarn, threads, embroidery patterns, and other indispensable accessories for creativity. Since virtually all the goods presented in this store are made in Romania, the prices are quite attractive. In addition to … Open

Constanta for children - what to visit

When you want to diversify your holiday with an unusual entertainment, you should definitely take a ride on the Telegondola din Mamaia cable car. It works every day. During the movement, a chic view of the city and its iconic sights opens from the covered cabin. Many tourists ride on the lift especially to make spectacular memorable photos and enjoy the picturesque views of Constanta. Children will also like this … Open

In the immediate vicinity of the city, is the fortress of Hercules. Despite its name, it has nothing to do with ancient culture. This fortress was built in the late 13th century. Since its inception, it belonged to Genoese merchants, and in the early 15th century was captured by late Sultan Mehmed I. In the 16th century, it came to neglect, and to date it has been preserved only partially. During a tour, tourists … Open

Traditions and mentality of Constanta

In their free time, tourists will have the opportunity to explore all facets of traditional arts and crafts, which have their place and time even in the conditions of the modern rhythm of life. The most popular type of applied art is cross-stitch embroidery, which serves as the main decoration for all national clothes. Today, the city has many specialized stores selling hand-embroidered vests and shirts. The most … Open