Nature of Romania - national parks and reserves for active recreation 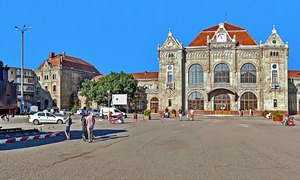 Hospitable, sociable and inclined to the unending organization of something new and interesting, Romanians live amongst a beautiful, ancient, and carefully protected nature. On the border of Romania with Ukraine, in the Danube delta, is formed the biosphere reserve of the Danube floodplains. This is a place that offers a comfortable life for some rare animal species listed in the Red Book.
National cuisine of Romania - specialties, recipes and restaurants
Romania’s rich history is reflected in her traditional cuisine. The food menu of this people takes its influence from the Slavic, Hungarian, and …
Read further
The high Carpathian Mountains that pass through the whole country are the main, but not the only, pride of Romania. Rocks, mountain serpentines and cool coniferous forests are full of ancient legends, wild animals and national parks along which tourists and locals take leisure walks. The mountains constitute a part of the Alpine folded mountains, and the highest ridges reach 2,544 meters (the Moldoveanu peak). One of the most memorable places is the Iron Gate, a natural narrowing of the ridge, with a panoramic view from the top. Since ancient times Carpathian Mountains have become a part of mysterious stories and legends, most of which have survived to this present day, enveloping the whole country with the mysterious fleur and the unquenchable interest of tourists. An example of this is the legend of Vlad Dracula regularly attracting crowds of tourists to the southern country.
One of the largest reservoirs in the country is the deep-water Danube, spread throughout the southern state, as well as Maros and Prut, separating the modern borders of Romania. Another one worth noting is Lake Razelm – a large group of freshwater and saline lakes in the east. Copyright www.orangesmile.com
National traditions and mentality of people in Romania
In the history of Romania, there is a mixture of traditions of Greek, Slavic, English and Muslim cultures. This colorful mixture of national …
Read further
The wild places of Romania are the territory of high and cool mountain ranges covered with snow caps, deep gorges that reproduce the echo of a lonely traveler, and the full-flowing river Danube which flows unhurried throughout the country. You will also see lots of National Parks and protected areas that preserve the wild nature of the country in its pristine condition. As a result, you can meet Bears, Roe Deer and even Wild Boars in the reserves of Romania (for example, in Piatra Craiului). The most famous natural beauty is inevitably considered to be the Red Lake and the Bicaz Gorge which attracts many tourists annually. 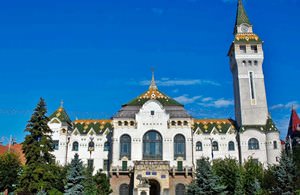 The climate of this Southern Country is not homogeneous. The areas near the Carpathian Mountains are pleasing to residents with hot summer and cold winter. The change of seasons is rapid and noticeable. For example, the temperature in summer can rise to as high as 38°C and yet drop to -32°C at the end of autumn. The climate in the plains is milder, continental, and the change of seasons passes gently and gradually; without noticeable temperature changes.
Romania cultural sights. What to see?
The unique and diverse architecture of the country is largely due to its rich history. The mixture of Greek, Saxon, East European and even …
Read further
The presence of many sunny and warm days, as well as the soils that are not clogged by large industrial plants, allow the rural inhabitants of Romania to collect a good harvest of fruits and vegetables every year. Romanian fruit wines are famous in the market for their rich aroma and excellent quality. Vegetation in the country is represented mainly by coniferous forests with curative air and a rich spread of flowering plants. The inhabitants of this agrarian country, especially rural ones, are fans of floriculture and pristine beauty. There is therefore no intensive deforestation in Romania. 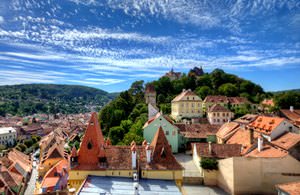 The animal kingdom of the country is rich and diverse. Large rivers are full of fishes including Pike, Sturgeon and Salmon. The abundance of reserves and the prohibition of catching wild animals lead to loads of different breeds of birds and large wild animals living mainly in the Carpathian Mountains. The way of life in Romania is largely due to a mixture of people and cultural traditions since the territory of the modern country was at various times under the rule of England, France, Austria and even the Roman Empire. The beauty of nature, the abundance of crops and the friendliness of Romanians will provide tourists with a comfortable stay, new cultural experience and many positive impressions.

National and city parks of Romania
♥   Natural park 'Bucegi' . On the map 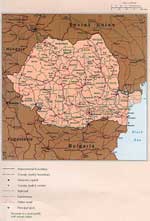 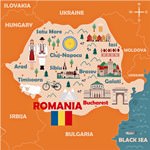 Cultural sights in regions of Romania

Bucharest
Revolution Square is a perfect place for walking. The square has witnessed many important historical events. You will also find many interesting excursion sites around the square. Royal Palace traditionally amazes visitors by its luxury. For a long time the palace remained the main residence of the Romanian monarchs. Today a part of the halls of the palace is dedicated to the exhibition of Romanian National Art Museum. Here visitors will surely find wonderful collections of fine old tapestries, … Read more

Timisoara
Opposite the cathedral there is a beautiful monument dedicated to those killed during the revolution of 1989. There is also Memorial Museum of Revolution (Memorial ul Revolutieri) that will allow learning a lot of important and interesting facts about this historic event. Among the exhibits there are uniforms, historical documents, books and a collection of newspapers, an interesting library and a rich collection of personal belongings of revolutionaries. The museum often hosts representations … Read more

Brasov
Among the religious sites of the city we simply cannot fail to mention St. Nicholas Cathedral, which is located in the quarter of Schei. The first church here was erected in the late 13th century. Later it was completely rebuilt in the late 15th century, and the next large-scale reconstruction took place in the 18th century under the leadership of Russian Empress Elizabeth. The walls of the church are decorated with artful painting, and its inner halls are full of ancient jewelry and religious … Read more

Constanta
Lovely church is quite different from those structures that were built in other European states in the late 19th century. After the discovery, it received beautiful frescoes, which still remains the most important religious artifact. There are also Muslim places of worship in Constanta. Carol I Mosque has perfectly preserved to this day. It was erected in 1900; the height of the mosque is 50 meters. There are several viewing points on shrine’s territory, from which you can admire the … Read more

Romania: Map of sightseeing in regions