Sightseeing in Kortrijk - what to see. Complete travel guide 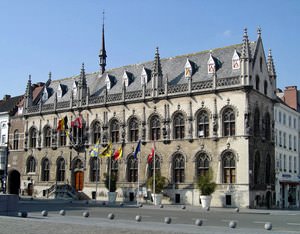 Kortrijk town is located on the bank of the Lys River. This is just 7 kilometers away from France. This town has been founded by the Romans. At that time Kortrijk was known as Cortoriacum. Later this ancient town was destroyed by the Vikings, but it was rebuilt and in the 12th century this place was a well-protected complex. Kortrijk became prosperous due to the fabrics trading. The quality of fabrics was so good that it had no equivalents elsewhere across the country.
Your active city break in Kortrijk. Attractions, recreation and entertainment - best places to spend your day and night here
Kortrijk is famous for its wonderful parks, so it will be more interesting for active tourists to come here during the warm season. One of the most beautiful places in town is Jardin des …

Open
Grote Markt Square is the central part of the modern Kortrijk. Near the square you can see main sights of the town. First you should start your observation by visiting Town Hall building that was built in best traditions of Renaissance. Here you can also see a medieval bell tower and a part of so called Cloth Rows. Many years ago here were located trading outlets. North to the square is located the main religious sight of the town – Collegial Church of St. Martin, which was built in the beginning of the 14th century. This is a magnificent building made in the gothic style. One of its towers has 48 bells. Church of the Most Holy Mother of God is one of the most important architectural and religious monuments that has survived through years. The church was built in the end of the 12th century. Nearby the church you can see amazingly beautiful houses, the walls of which are colored in white and roofs are colored orange. This part of the town is traditionally calm and silent, despite its proximity to the center.
While making a walk in the garden, you will see Broel Toren that was built in 14th-15th centuries. The towers from this complex have been once used as protective facilities and today they remind of the glorious military past of this place. Near this architectural complex is located a small museum that will provide guests with very interesting information about the history of the city. Mother of God Hospital is another important architectural place of interest that is definitely worth visiting. Copyright www.orangesmile.com
Advices to travellers: what you should know while being in Kortrijk
1. All important sights of Kortrijk are located near, so it’s recommended to have a walking tour around the city. 2. The most appropriate urban transport is a bus; it runs every day …

Open
In the immediate vicinity of the city, there is a very interesting Museum of Smoking Pipes and Tobacco. It is located in a beautiful historic building. To visit this museum will be interesting even to those who have never experienced a special attraction to tobacco smoking. Among the exhibits of this museum are various options for smoking pipes, cigarette cases, boxes of tobacco and other accessories, some of which are over 500 years old. 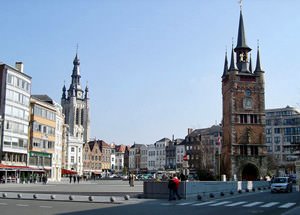 An excursion to the Museum of Peter Benoit promises to be very informative. It is dedicated to the life and work of the famous Flemish composer. The main feature of this museum is that it is interactive. Its visitors are offered to travel back into the end of the 19th century, to try out different musical instruments and look at the composer’s belongings. On the territory of this museum, there is a small old house, in which the atmosphere of past centuries was recreated. Many interesting old things are kept here.
Shopping in Kortrijk - main shopping streets, outlets and boutiques
Popular shoe store Julien aimed at both men and women can be found on one of the main streets of Kortrijk. It offers customers one of the largest assortments of shoes in town, presenting …

Open
In Kortrijk, part of the defensive structures that were built during the Middle Ages, were preserved. Next to the Church of Our Lady is the architectural complex “Broeltorens”. It is a fragment of the fortification wall, which was destroyed in the 18th century. The ancient tower, which was built as far back as the beginning of the 15th century, is preserved here. Today, it is accessible to all those who crave it. 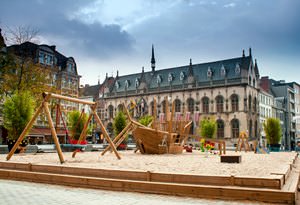 Among the numerous religious attractions of the city is the Saint Martin’s Church. The very first Christian church in its place was built in the middle of the 7th century. The construction of a new church in the Gothic style began in the late 14th century. Its erection was finally completed only in 1466. Many elements of the decoration of this church have survived to this day, including an incredibly beautiful tabernacle, whose height is 6.5 meters. It was installed in the church in 1585.
Family holidays with kids in Kortrijk. How to entertain your child, things to show to children.
Arriving in Kortrijk with children, it should be borne in mind that entertainment in the city is mainly aimed at those wishing to spend time quietly. There is a small chance to meet loudly …

Open
An unusual architectural monument is the Church of the Archangel Michael that was built in the beginning of the 17th century by special order of the Jesuit order. Originally, the facade of the church and its interior decoration were made in the Baroque style. During the reconstruction of the 19th century, the church acquired unique features in the Neo-Gothic style. The main religious artifact of the church is the miraculous statue of Our Lady, made of ivory.

This guide to iconic landmarks and sights of Kortrijk is protected by the copyright law. You can re-publish this content with mandatory attribution: direct and active hyperlink to www.orangesmile.com.
Kortrijk - guide chapters 1 2 3 4 5 6 7 8

Survived castles around Kortrijk
♥   Castle 'Ingelmunster Castle' , 9.6 km from the center. On the map

National and city parks around Kortrijk
♥   Regional Nature Park 'Scarpe-Escaut' , 47.2 km from the center. On the map

Sights around Kortrijk from our guide 'Extreme places on Earth' 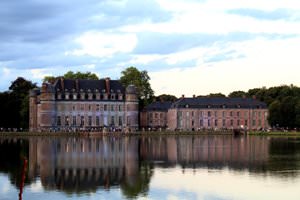 Distance from Kortrijk center - 45.3 km.
The experienced tourists strive to visit the castle at the beginning of corn. For several years it has served as the location of the beautiful flower festival 'Amaryllisfeerie'. In the course of ten days the guests of the castle can enjoy the wonderfully beautiful colors and participate in the exciting cultural events. At the end of August the castle welcomes the followers of classical music. The concerts of the most famous musicians and orchestras take place in the picturesque Schlossgarten. … Read further 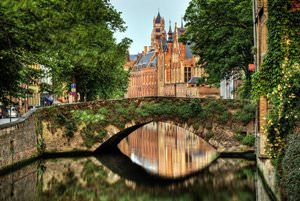 Distance from Kortrijk center - 41.9 km.
The Hans Memling museum, opened in the 15th century, is one more interesting place in the town. A lot of items that are exhibited in the museum were there since it first days. The most unusual cultural landmark of Brugge is the Lace center. Since the old times the town was the large center of lace production. Now you can buy the unique lace staff. For 2000 year the historical district of Brugge with all its architectural monuments was placed in a list of UNESCO heritage. … Read further

Search touristic sites on the map of Kortrijk

Sightseeing in regions nearby Kortrijk

Lille
Lille is the fourth largest city of France that perfectly combines culture and history of Flanders, France and Norway. It is located in Nord-Pas-de-Calais region and is known as the commercial center of Europe. Lille is located on the crossing of five large auto routes. The architecture of the city is very colorful and diversified because it combines various influences of the ... Open »
Gent
The City Museum of Contemporary Art S.M.A.K. is located in a beautiful modern building. It exhibits works of art of different directions from 1945 to the present day - cobra, pop art and minimalism. In the museum you will see works of such famous artists as Joseph Bays and David Hammons. S.M.A.K. is located opposite to the Museum of Fine Arts in Citadelpark, near the ... Open »
Brugge
Beguinage. This is one of the main places of interest in Bruges. It was founded in the 13th century, though the majority of white houses appeared only in the 17th and 18th centuries. The arch bridge, which forms the entrance to the palace, was built in 1570. Beguine sisterhood doesn't live there anymore, and this place now belongs to the Benedictines from De Wijngaard ... Open »
Oostende
It’s a major port city and a famous resort. The city’s name can be translated as “Eastern Region” as originally it was located in the eastern part of Testerep Island. Later sea level lowered and the island merged with mainland, but its name kept the memory of its foundation. During the warm season the resort attracts visitors by its spacious beaches; the swimming ... Open »
De Haan
De Haan is situated twelve kilometers from Ostend. The tram is a very comfortable way to move between these two cities and other settlements in the coastal area. That is why, if you want to get to De Haan quickly from Ostend, simply find the tram that goes in the right direction. There is one more way to get to the aristocratic town – by using a transfer from Ostend. The ... Open »
Blankenberge
If you seek serenity and peace, it is hard to find a more suitable place. This is an ideal area for relaxing both body and mind. Only seagulls flying above the water sometimes ruin the silence with their cawing. While taking a stroll along the coast, you can enjoy the inimitable scent of the North Sea that smells differently from the usual sea scent. The picture-perfect ... Open »

All about Kortrijk, Belgium - sightseeings, attractions, touristic spots, architecture, history, culture and cuisine. Prepare your trip together with OrangeSmile.com - find out the 'must see' things in Kortrijk, which places to visit, which excursions to take, where the breathtaking views are waiting for you. Planning your trip with this travel guide will help your to get the most out of Kortrijk in few days.