Sightseeing in Brugge - what to see. Complete travel guide 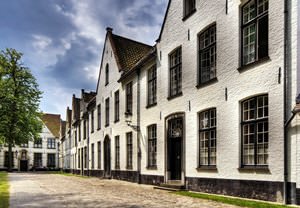 Bruges is located in the Belgium province of West-Flanders that is approximately 2 hours away from Utrecht (Holland). In the 9th century this town was conquered by the Vikings, that's why the name of the city is likely to come from the Scandinavian word &#39bryggia' that means 'port'. Bruges is situated not far from the North Sea, so it has become quite an important international trade centre. Later, in the Middle Ages, a big wall was built around Bruges.
Top places to stay in Brugge - most luxurious hotels
Die Swaene is located on a pebble pavement near a picturesque canal. The hotel is surrounded by historic buildings that only add to the heritage of the area. The main hall of Die Swaene has …

Open
Beguinage. This is one of the main places of interest in Bruges. It was founded in the 13th century, though the majority of white houses appeared only in the 17th and 18th centuries. The arch bridge, which forms the entrance to the palace, was built in 1570. Beguine sisterhood doesn't live there anymore, and this place now belongs to the Benedictines from De Wijngaard convent. The house under the first number serves as a museum, so everyone can get an idea of Beguine's way of life. The kitchen, the dining-room and bedrooms are furnished in the style of the 17th century. Initially, the main chapel was made of wood, but, unfortunately, it burnt down. In 1605 a new chapel in the baroque style was built on its site. Fortunately, it has remained undamaged till our times. Nowadays, everyone is welcome to visit the chapel. The chapel is famous for the oldest image of Our Lady in Bruges. The image was created in 1240. There is also an altar with the alabaster sculpture of Christ of the 17th century on the right.
Beguinage is situated near Minnewater Lake, which used to be a part of the canal that connected Bruges and Ghent. Nowadays it's just a small picturesque lake with beautiful swans swimming in it. There is an interesting legend in Bruges, which is connected with swans. When Maximilian of Austria raised the taxes again, Bruges citizens rebelled and captivated the city. They also beheaded the former town head, whose name was Pieter Lanchals (it means 'long neck'). When Maximilian got the power back, he made an order, according to which swans (because they also have long necks) are to be bred till the end of the world in Bruges. Do you know how to differ a female swan from a male swan? You can guess by the mark - male swans have it on the right clutch and female swans have it on the left one. Copyright www.orangesmile.com
Old hotels keeping the history of Brugge
Spectacular De Orangerie Hotel is located in a unique historic mansion, the history of which starts yet in the 15th century. Initially, a monastery stood on the site of the mansion, in 1873 …

Open
The chapel of the Holy Blood. The chapel of the Holy Blood was built on the site of Basilius Chapel of the 12th century. The beautiful church is a wonderful example of the Romanesque style. Visitors will see a colored wooden image of the Virgin with the baby (approximately 1300) on the right nave. Initially, the chapel of the Holy Blood was built in the Romanesque style, but in the 15th century after the reconstruction it turned into a Gothic chapel. During the French revolution the basilica was ruined, and then it was rebuilt from the very beginning. Entering the church is free, but you will have to pay in order to visit the Museum of the Holy Blood. As the legend says, in 1150 a part of linen with blood of Jesus was brought from Jerusalem. The duke that had brought it ordered to build Basilius Chapel, where the relic was to be kept. We can't say for sure whether it’s truth of not. Scientists have a theory that most likely the legend tells about Duke Baldwin IX, who brought it from the crusade to Constantinople in 1203. 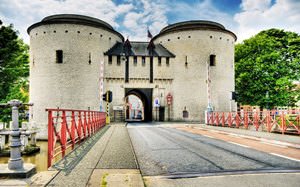 The blood of Jesus is kept in an incredibly beautiful casket of 1817. Jan Crabbe, the master who created the casket, used approximately 30 kg of gold and silver, and more than a hundred of jewels. Every year on Ascension Day a solemn ceremony takes place in Bruges. The procession carries the casket through the streets of the city. The museum located nearby is a great place to learn the detailed history of the relic and the basilica. One can also look at the silver crown of the 15th century, which was presented by Maria of Burgundy, and some other interesting paintings.
Legends - famous hotels of Brugge
Relais Bourgondisch Cruyce Hotel had been a popular hotel before the famous movie “In Bruges” came out. Nowadays, one needs to book rooms in advance to be able to stay there. The wood …

Open
Grote Market. The central square of the city is located in the very heart of Bruges. At the square you'll find a lot of marvellous historical buildings. The Belfort built in the 12th century is one of them. The tower of this building is 83 meter high and it deflects to the left for a meter. Grote Market is also home to various cafes and restaurants. By the way, carriage excursions also start there. This is a very popular kind of entertainment in Bruges. 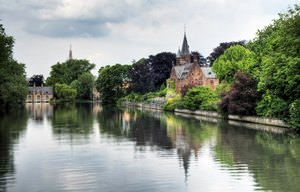 Halve Maan. Halve Maan is a brewery, where the sort of beer called Brugse Zot (you can taste it in Bruges only) is produced. Long time ago the brewery also produced another sort of beer - Straffe Hendrik. However, nowadays this beer is not produced anymore. Since 1564 this brewery has been located in the same building at Walplein Square, in the historical center of Bruges. Nowadays, the excursions to the brewery have become very popular. Of course, beer degustation is the culmination of every excursion.
Best hotel choice for romantic escape, wedding or honeymoon in Brugge
Let yourself be charmed by the most romantic hotel in Europe. Relais Bourgondisch Cruyce is elegantly decorated with valuable antiquities, exclusive artworks, premium furniture and …

Open
The City Hall. The fabulous City Hall was built by order of Jan Rugirs. It was finished in 1421. The front side of the building is beautifully decorated with small towers. Wall paintings are especially interesting. The City Hall is situated at de Burg Square.

Shopping streets in Brugge
♥   Shopping area ' Steenstraat' Brugge, 0.3 km from the center. On the map

Survived castles around Brugge
♥   Castle 'Tillegem Castle' , 4.1 km from the center. On the map

National and city parks around Brugge
♥   National Park 'Oosterschelde' , 64 km from the center. On the map

Art galleries in Brugge and around
♥   Art museum 'Groeningemuseum' Bruges, 0.4 km from the center. On the map

Sights around Brugge from our guide 'Extreme places on Earth' 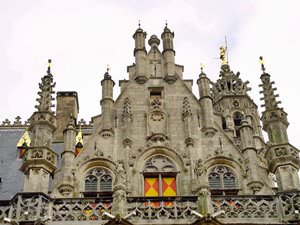 Distance from Brugge center - 48 km.
There are no so many outstanding historical sites in Oudenaarde. Its old part is a single and unique architectural complex. The old town hall is the starting point for many sightseeing programs. A beautiful fountain runs in front of the town hall during the warmer months. It is also an important historical landmark. … Read further 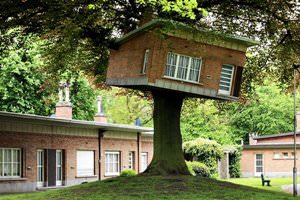 Distance from Brugge center - 38 km.
The monument is no less popular. Every day curious tourists come here to take interesting photos. The impressive sculpture and the adjoining old building are surrounded by an incredibly beautiful park, through which you can stroll at any time of the year. Here grow majestic, old trees, in the shadow of which comfortable recreation zones have been equipped with benches, as well as other no less remarkable sculptures. … Read further

Search touristic sites on the map of Brugge

Sightseeing in regions nearby Brugge

Blankenberge
The town’s beach is the main landmark of Blankenberge and the main reason to come here. What is so special about this beach? Length is the first thing that distinguishes the beach from other coastal areas. The beach is three kilometers long but there are no trees in the coastal area, and the vegetation is scarce. The beach’s width is roughly three hundred and fifty ... Open »
De Haan
Are you fond of golf? A popular local landmark - Royal Golf Club – always has its doors open for new guests. In this club, visitors can always enjoy their favorite game or watch professionals – the club regularly hosts golf competitions. If you are an experienced golf player, you can test your skills and participate in these tournaments. If you are an art connoisseur, ... Open »
Oostende
St. Peter and Paul Church built in 1905 is the most important religious place of interest of Oostende. The height of the towers estimates 72 meters. On the territory of the church is buried the first queen of Belgium, Louise Marie of Orleans. Not far away from the church is located St. Peter’s Tower, the main decoration of which is the ancient clocks created by masters in ... Open »
Gent
Gravensteen. This is a medieval castle, located right in the center of the city. The defensive system of the castle has fully retained its original appearance. The castle’s gate, walls and stables also deserve attention of curious travellers. Gravensteen , the history of which is more than 800 years, was place from which the rulers commanded Flanders. The castle is the ... Open »
Middelburg
There was a fortress on the site of the modern Dutch city in the eighth – ninth centuries. This stronghold, the main purpose of which was to protect the region from the Viking invasions, became the heart of a small settlement. The first Catholic monastery appeared in 844 AD. The settlement was developing and its territory was growing, but the authorities didn’t hurry to ... Open »
Lille
Lille is famous for its museums and historical quarters, the central square named Grand Place and the old building of exchange that once has been a large trading center and the best place to buy quality clothes. Grandiose heritage of Lille is kept in the halls of its museums. The most popular museums of Lille are Museum of Natural History and Geology of Lille famous for its ... Open »

All about Brugge, Belgium - sightseeings, attractions, touristic spots, architecture, history, culture and cuisine. Prepare your trip together with OrangeSmile.com - find out the 'must see' things in Brugge, which places to visit, which excursions to take, where the breathtaking views are waiting for you. Planning your trip with this travel guide will help your to get the most out of Brugge in few days.