Sightseeing in Brussels - what to see. Complete travel guide 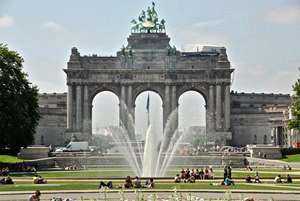 If you come to Brussels, it may simply turn out that you will physically have not enough time for visiting all the sights, monuments and historical buildings of this city. Atomium is known as the symbol of modern Brussels. The sight was projected by A. Waterkeyn for the 1958World's Fair in Brussels. The spheres of Atomium symbolize atoms in a model of an iron crystal, which is enlarged in 165 billion times. The tubes that connect the molecules of iron symbolize the connecting strength. Recently, Atomium has undergone a large restoration. For example, the aluminium facing was changed for a non-rusting one.
Shopping in Brussels - main shopping streets, outlets and boutiques
In Brussels, there are more than a hundred shopping streets with interesting shops on each of them. Among the most popular is Neuve Street. It is here, that the wealthiest travellers go …

Open
The Grand Place. The Grand Place, or Grotte Markt in Dutch, was almost totally ruined by the French artillery in 1695, only the City Hall remained untouched. The reconstruction of the square started without any delay and after this the Grand Place turned into one of the most beautiful squares in the world. The front of every building is unique, but it doesn't prevent the square from looking harmoniously and laconically. The Grand Place is surrounded by the City Hall, The Royal House and The Guild Houses with their fabulous golden fronts in the Flemish style. The Brewers' Guild House is the location of the Museum of Beer and The Royal Palace hosts the exhibition of the National Museum.
Cinquantenaire Park. Cinquantenaire Park is an ideal place for travellers, who would like to spend their free time far from stress and noise of big city, and who would like to learn something new. This park was created for the anniversary of the independence of Brussels in accordance with the project of Leopold II. The marvellous triumphal arch is the main distinguishing feature of the park. Famous French Arc de Triomphe was the prototype of this arc. In Cinquantenaire Park you will find many interesting museums, such as the Autoworld Museum, the Royal Museum of Fine Art and the Museum of the Army. This beautiful park is simply the best place for making an unhurried walk and enjoying the beauty of nature. Copyright www.orangesmile.com
Top touristic routes around Brussels: architectural sightseeing and landmarks
Discovering the architecture of Brussels from bird's eye view! Brussels Town Hall, Atomium, Law Courts, La Monnaie, Royal Museum of Armed Forces, Chapel Church, Halle Gate, all those monuments are defining the image of Brussels … 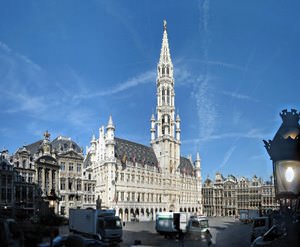 The Royal Castle of Laken. Thanks to Leopold II the Royal Castle of Laken strikes visitors with its richness and gorgeousness. Leopold II was constantly widening the territory of the castle by buying housing estates from his peasants. The castle has become the residence of the Royal Family of Belgium since the 19th century. While walking in the park you'll surely see various places of interest, such as the Royal Palace, the China Tower, the central dome of the royal greenhouses or the China Hall.
Cultural vacation in Brussels - fantastic architecture and monuments
Cathedral of St. Michael and St. Gudula, Basilica of the Sacred Heart, Royal Palace, Royal Palace of Laeken, Saint Jacques sur Coudenberg, as well as many others, they all become the world's cultural heritage objects and remain as iconic monuments for Brussels …

Open
The Royal Palace. The Royal Palace is one of the most fabulous official buildings in Brussels. It symbolizes Belgium monarchy. This is the place where the king fulfils his duty as the head of the country, solves governmental questions and holds audiences. Everyone can visit the Royal Palace and its terraces from the 21st of July till the beginning of September.

This guide to iconic landmarks and sights of Brussels is protected by the copyright law. You can re-publish this content with mandatory attribution: direct and active hyperlink to www.orangesmile.com.
Brussels - guide chapters 1 2 3 4 5 6 7 8 9 10 11 12 13 14 15 16

Shopping streets in Brussels
♥   Shopping area ' Rue Neuve' Brussels, 1.1 km from the center. On the map

♥   Shopping area ' Avenue Louise/Louizalaan' Brussels, 2.2 km from the center. On the map

Survived castles around Brussels
♥   Castle 'Royal Palace of Brussels' , 0.8 km from the center. On the map

♥   Castle 'Groot-Bijgaarden Castle' , 7 km from the center. On the map

National and city parks around Brussels
♥   National Park 'Grenspark de Zoom - Kalmthoutse Heide' , 62.1 km from the center. On the map

Art galleries in Brussels and around
♥   Art museum 'Royal Museums of Fine Arts of Belgium' Brussels, 0.5 km from the center. On the map

♥   Art museum 'Cinquantenaire Museum' Brussels, 3 km from the center. On the map

Sights around Brussels from our guide 'Extreme places on Earth' 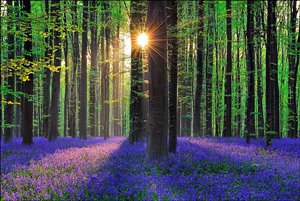 Distance from Brussels center - 15.8 km.
The forest is located in the surroundings of the town of Dvorp and is only a 30 minute drive from Brussels. The fact that the sight is located in the immediate vicinity of the large industrial centers makes it even more strange. According to the approximate bills, the age of the unique Blue Forest forms about 400 years. The researchers believe that so extensive hyacinth thickening has formed on its territory in the course of a few centuries. Today, the forest is the unique ecosystem that serves as a location for rabbits, deer and rare birds. If you are lucky, you can meet the forest inhabitants during the hike. … Read further 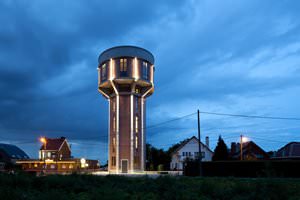 Distance from Brussels center - 13.1 km.
The original construction was completely restored, on the ground floor the garage was furnished. For the convenience of the residents the tower was provided with the elevator. The rooms were designed as minimalism. The modern furnishings of the old tower have nothing in common with the old traditions. The elegant colors and the strict forms weigh in the interior furnishing. The original house in the water tower is environmentally friendly and is designed with the natural materials. In addition, the house uses the alternative energy sources, which makes it even more unique. … Read further 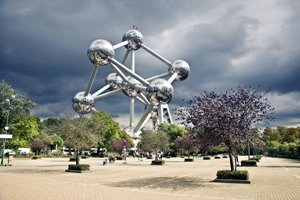 Distance from Brussels center - 5.8 km.
The unique building, whose design was developed by the outstanding architect Adre Waterkeyn, is today the landmark of national importance. The huge pipes that connect the spheres have not only a decorative purpose. Inside are the escalators and high-speed trains, with the help of which visitors of the 'atom' can move freely through their entire space. In 2006 the unusual building was completely renovated, after which it even looked more attractive. In the evening Atomium is illuminated by the wonderful illumination. The building is surrounded by the picturesque park with fountains and comfortable recreation areas. … Read further

Search touristic sites on the map of Brussels

Sightseeing in regions nearby Brussels

Mechelen
This Belgian town has recently become very popular among Russian tourists. Since ancient times Mechelen has been famous for bell art. Many bells manufactured by local artists are installed in largest churches of Moscow and St. Petersburg. There is also an old school of bell ringers named Het Shipka in Mechelen. When it comes to historical and architectural monuments of the ... Open »
Leuven
Leuven is a city in Belgium located in the province Brabant. Leuven is a port town that stands on the Dyle River and on a channel that connects Leuven with Scheldt. The population of the city estimated 32.2 thousands of people in 1971. The city features well developed sawing, textile, metal processing and chemical industries. The oldest catholic university of Belgium is also ... Open »
Antwerpen
Antwerp is an amazingly beautiful city. Due to its cultural and historical places of interest, Antwerp has always occupied a special place among cities and towns of Benelux. The centre of Antwerp is home to numerous great museums and architectural sights. The Royal Museum of Fine Arts is known as the most famous museum of Antwerp. The Antwerp Cathedral is often called the most ... Open »
Charleroi
The convenient location of Charleroi has provided this place with the role of the largest transportation hub of European importance. The world-famous airport located here is called Brussels-Charleroi Canal and it connects the city with largest waterways. The role of Charleroi as an important railway junction is also hard to overestimate. The city’s station, which is located ... Open »
Gent
The city of Ghent is located in Belgium, and it is the capital of the East Flounder province. The population of the city is approximately 235,000 residents. Ghent is surrounded by flower fields, thanks to which the city has received the epithet "the city of flowers". This city is distinguished by rich cultural past. This can by clearly seen in the central part of Ghent, where ... Open »
Namur
The first mention of Namur belongs to the 7th century. The first settlers of this region were the Celts; then the area was conquered by the French people and later by the Austrians. Namur was added to the territory of Belgium only in the late 19th century. This is an ancient city with rich history and great historical heritage. Start your observation of the town from a walk ... Open »

All about Brussels, Belgium - sightseeings, attractions, touristic spots, architecture, history, culture and cuisine. Prepare your trip together with OrangeSmile.com - find out the 'must see' things in Brussels, which places to visit, which excursions to take, where the breathtaking views are waiting for you. Planning your trip with this travel guide will help your to get the most out of Brussels in few days.