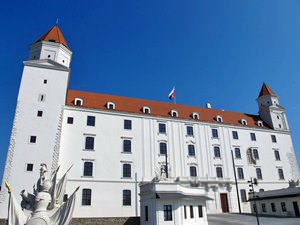 In this article, dedicated to the architecture of Bratislava, we will 'fly' over such iconic historical monuments as Bratislava Castle, Church of St. Elisabeth, Bratislava City Museum, and St. Martin Cathedral. In addition to the virtual flight video, we offer the most important and interesting facts about every landmark, including high-quality photographs. You can also use this article to make your own excursion tour in Bratislava. Simply use the icon

to locate the object of interest on the map of Bratislava. 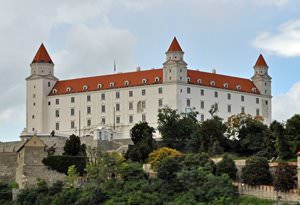 Facts:
» According to the historical data, the predecessor of the castle in Bratislava corresponds to the time of the appearance of the Egyptian pyramids (the second half of the 3rd century BC).
» The building constructed on the hilltop consists of the palace with towers (one of them dates back to the 13th century), defensive walls, gates, and a park. There are corner towers in the quadrangular construction.
» The exterior of the castle has been preserved since the 15th century. It differs from other historic constructions with its white walls and red tiles.
» You can enter the territory through the gates constructed at different times. The Vienna Gate leads to the entrance to the palace. It consists of 4 columns with sculptures of warriors in uniform.
» You can see various collections in the palace. Their exhibits have been transported from several museums. Here, you will find a numismatic collection, old musical instruments, artifacts of the Paleolithic Period, a Neanderthal’s skull, and jewelry made in the Bronze Age.
» The second level (the Hall of Fame) houses exhibits dedicated to Slovak hockey.
» There is a modern children’s playground in its territory. You can see the panorama of Bratislava from the observation platform. There are modern tramways under the palace. 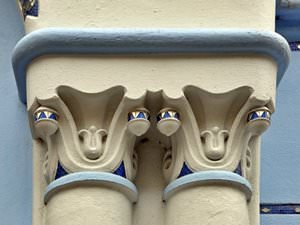 Facts:
» The unusual oval construction with the spire and bell tower is called St. Elisabeth Church after the Hungarian princess, one of the famous martyrs living in the 13th century.
» The mosaic above the entrance and picturesque clay pictures of the saints’ daily routine show the history of St. Elisabeth, the patron of the afflicted. The icons above the altar depict her. The bronze sculpture in the territory of the construction was installed in her honor.
» The facade of the Blue Church is made of sky blue tiles. The huge size and the bright shine of majolica feature only this building.
» The temple was blessed in 1913. The round tower with the spire is 37 meters high. The bell tower with a clock is crowned by the cross.
» Architectural decorative inserts are smooth and round and literally blend into one another. It leaves an impression that you see the festive cream cake in the shape of the house.
» The interior is also in blue.
» Upper secondary lessons for children are held in the Catholic Temple. The church is open for visitors. Wedding ceremonies are held here. 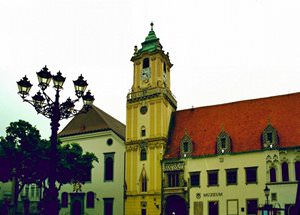 Facts:
» Now, the City Hall of Bratislava serves as a museum. It consists of constructions of the 13th-14th centuries. The building was repeatedly reconstructed. So, the architecture of the building is very diverse.
» The colorful roofing material is very attractive. On one of the corners of the house, there is the statue of the Mother of God.
» There is still a cannon ball in the wall that is a demonstration of the attack of Napoleon’s army. On the facade, you can see the line that marked the level of water rise during the flooding of the river in 1850.
» There is a clock tower in the roof. You can see the silhouettes of buildings from the observation platform.
» The main purpose of the museum is to acquaint visitors with household items of the old times. It was founded in 1868.
» Archaeological artifacts will tell you about folk traditions. You should pay attention to artificial targets for shooting made in the 17th-19th centuries. Targets are quite standard. The bicycle with different wheels, big and small, is a very interesting exhibit. Such models had been used until 1880.
» There is the collection of binoculars, some of which are made of the inner layer of shells. The keys to the city are huge. They represent the entrance to the city.
» You can see some important historical events of Bratislava on the touch screen. 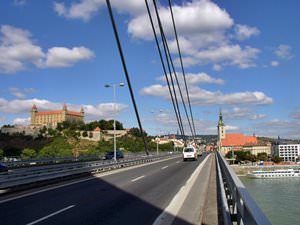 Facts:
» The temple was built on the hilltop, at the site of the former cemetery, in the 13th century. It was being built for 150 years. It was blessed in 1452.
» It is a proportional building. It ends with an 85-meter tower. Its top is decorated with the gilded copy of Hungary rulers. It is 1 m high and weighs 300 kg.
» In the Cathedral, the nobles - 10 rulers and one empress - were crowned.
» There are four chapels. There are tombs of eminent citizens under one of the chapels, at a depth of 6 meters.
» Architectural central entrance represents the preserved sample of the Slovak Renaissance. It represents the Holy Trinity.
» Kings sat in the long room during masses.
» There are also preserved documents recalling that the oratorio of Beethoven was performed here in the 18th century, and composer Liszt conducted here in the 19th century.
» The ceiling impresses with its decorations. There are wooden sculptures along the walls. You can see Biblical paintings on stained glass windows.
» In the territory, there is a monument to St. Martin the Merciful, the patron of the deprived. It represents him bending over the beggar and giving him a cloak.
» The temple houses the collection of church values.
» The cathedral church is open for visitors. 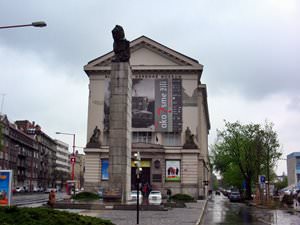 Facts:
» The Slovak National Museum is primarily a main building that presents archaeological, historical and ethnographic artifacts. Numismatic, art and historic collections tell us about the nation development.
» At the ground floor, temporary exhibitions are often held. Their themes are always different. So, collections are different too: struggle for independence, folk traditions and signs, culture from ancient times to date.
» Visitors can learn more about the nature and geological structure of the region by examining the corresponding collection at the second level.
» The third level is occupied by a big library.
» According to the architectural project, the building was built of modern materials. It features clear lines and shapes. The entrance to the rooms is also permitted to persons with disabilities.
» The National Museum includes 18 special departments in different corners of the country. The museum fund includes over 3 million exhibits.
» The idea to open the national institution belongs to ethnographer Andrej Kme. His private collection (1908) includes the remains of mammoths he found in Slovakia.
» The Museum annually organizes over 2000 exhibitions all over the country and abroad. They are visited by over a million people.

Facts: » The Catholic Church was built in the style of baroque in 1717. The building with an unusual curved oval facade was blessed in 10 years.
» The cathedral was named after the saints who founded the Monastic Order of the Holy Trinity. The members of the Order redeemed Christians out from Muslim slavery.
» One of those people being redeemed was Cervantes who came back to Span and wrote his famous “Don Quixote” there.
» The temple is decorated with a flower dome made by the Italian master. There is a canvass above the main altar. It represents church patrons. The painting shows the time when captive slaves are redeemed.
» In 1844, the monastery was added to the church. Upon the order of the Austrian Emperor who opposed to the Catholic Church, the monastery was closed.
» This place is famous for concerts of eminent composers Liszt and Brahms and solemn meetings held.
» In 1862, the Priest blessed Philipp Eduard Anton von Lenard, a future nominee for the Nobel Prize in Physics.
» Significant historic events took place here. Kostol Trinitarov gained the status of the historical and architectural monument.

This guide to architecture monuments in Bratislava is protected by the copyright law. You can re-publish this content with mandatory attribution: direct and active hyperlink to www.orangesmile.com.
Bratislava - guide chapters 1 2 3 4 5 6 7 8 9 10 11 12 13 14 15 16

Plan your own tour over Bratislava on the monuments map 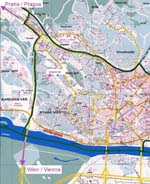 Search for architecture monuments of Bratislava on the map

Tours through neighbours of Bratislava

Vienna
The Rathaus serves as the seat for both mayor and city council of Vienna. The town hall made in the Gothic Revival style was built in the late 19th century. The main hall of the Rathaus is of great interest for tourists, as its length reaches 71 m. This room is decorated with sculptures of famous Viennese. The hall is often used for exhibitions, concerts and balls. In total, the Rathaus hosts about 800 events per year. The central tower of ... Open »
Budapest
The Hungarian Parliament is the hallmark of Budapest. Here is the residence of the Hungarian Government. Construction of the parliament building was conceived after the unification of Buda (the western part of the Hungarian capital situated on the right bank of the Danube) and Pest (the eastern part of the Hungarian capital separated from Buda by the Danube) in 1873. The Hungarian Parliament Building is the largest in the country. It consists ... Open »
Prague
Tyn Church is one of the most famous symbols of the Czech capital. It’s called the Church of Our Lady of Tyn. Tyn Church can boast the oldest organ in Prague made by master Mundt in 1673. The temple is notable, as about 60 remains of great and unknown people lie there. Some gravestones in the church are damaged because many residents believe that they can get rid of toothache by stepping on the gravestone. At the beginning of the 15th ... Open »
Krakow
Wawel is the architectural complex on a hill in Krakow. The complex consists of numerous buildings and structures, but the biggest and most famous of them are the Royal Castle and the Cathedral of St. Stanislaw and Waclaw. Wawel is a very important place for the Polish, which was originally the center of political power and the seat of Polish kings. During the 20th century Wawel has being the residence of Poland governors. After the invasion ... Open »
Salzburg
The Hohensalzburg Castle is a medieval fortress located on a high mountain. It was built in 1077. Originally, the castle belonged to archbishop Gebhardt I. The foundation is all that remains of that building. The castle has been rebuilt and strengthened and finally become a mighty fortress. In 1500, the world’s first funicular was constructed. They delivered different goods to the fortress. Over the years of its existence, the ... Open »
OrangeSmile.com - online travel reservation expert providing reliable car rental and hotel booking services. We feature more than 25.000 destinations with 12.000 rental offices and 200.000 hotels worldwide.
Secure Server