Sightseeing in Kremnica - what to see. Complete travel guide 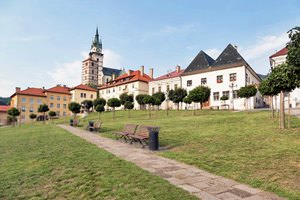 The interesting town of Kremnica is currently incredibly popular with tourists from all over the world who visit Slovakia. This settlement has become popular and renowned across Central Europe. Kremnica welcomes thousands of foreign guests every year. There are particularly many tourists in summer when the whole town indulges in the atmosphere of humor and satire and in winter during the ski competitions.
Starting from the Middle Ages, Kremnica has been one of the main gold mining centers in the world – the region’s mountains are rich in this precious metal. First mining activities in the region started yet in the 9th century. Naturally, such rich deposits of gold couldn’t stay unnoticed. In the 13th century, the everyday life of local people was totally ruined by a Mongol invasion. Many people died during the battle, and a large part of the town was destroyed. Hungarian kings decided to send German colonizers to Kremnica in order to increase the settlement’s population and resume gold mining in the region.
In the 14th century, Charles I of Hungary granted imperial privileges to the town. Soon after that, Kremnica was officially mentioned in the documents for the first time. A mint was established in Kremnica in 1335. It manufactured gold coins that were widely adopted in the Hungarian Kingdom. Gold mining in the region became particularly active at the edge of the 14th and 15th centuries. Miners tried to extract the precious material from the depths of the ground until subsoil waters turned into an obstacle. Starting from that moment, it became too expensive to mine gold here. Miners went to work for the last time in the 70s of the 20th century. After that, the mines became closed. Copyright www.orangesmile.com
The castle with the same name is a signature symbol of Kremnica. The gorgeous building stands on the main square of the town. This is not just a majestic castle but a whole ensemble of medieval buildings. The building of Kremnica Castle started in the 13th century and lasted almost two centuries. A Gothic temple erected in the name of Saint Catherine is one of the most famous elements of the complex. It is easy to recognize the temple because it has a high bell tower. A Romanesque rotunda was the first building in the castle ensemble. However, it was soon decided to demolish the rotunda and build a city hall on its site. For many years, this city hall building housed the town’s administration. 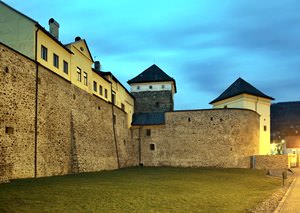 The castle suffered much damage in a fire in 1560. After that, the mayor of Kremnica moved to another building, and the damaged residence became the town’s archive. The Count Chamber was another important part of the architectural complex. The host was responsible for the mint. The chamber didn’t survive until modern days because it became too ramshackle and was eventually demolished in the 19th century. Nowadays, there are several museums in Kremnica Castle. This is a popular exhibition venue. Guests of the town can see an exhibition of ancient weapons and see the artifacts that archaeologists discovered in the Slovakian land. Do you want to buy a copy of an old coin? There is an interesting museum dedicated to old coins and medals in the castle.
How about learning more about mining in the region and the everyday life of miners? A very interesting venue opened in Kremnica in 2008 – Mining Museum Andrej Adit. This museum is open in an old mining tunnel. The main aim of the establishment is to underline the historical importance of mining and miners in Kremnica. During an excursion in this museum, you will learn about the past and present gold mining sites in the vicinity of Kremnica. You will also see with your own eyes how workers lived and worked in the mine. Needless to say, the old mine doesn’t have bright lighting so prepare to walk in the twilight. That being said, it is still so easy to notice the shine emitting from the veins of gold. 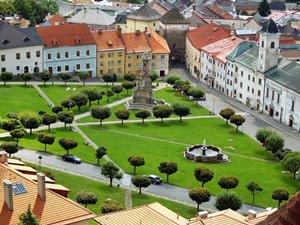 Besides the mint that is located in Kremnica Castle, there is a similar cultural venue in the city. It is open in the merchant’s house on the main square of Kremnica. Tourists like this establishment because they can see a large collection of antique items that the local mint was once producing. Some exhibits are relatively new – the mint sometimes manufactures coins for special occasions. This is a wonderful place to learn more about the history of money in Slovakia and the record of all coins ever minted in the country.
There is no similar numismatic museum in the whole country that exhibits not only various means of payment adopted in Slovakia but also numerous medals and symbols of honor. The exhibits date back from the Renaissance period to modern times. Finally, guests can go down to the mine, the entrance to which is located near the merchant’s house and see how the gold for the coins was mined in the past. Once the excursion ends, don’t forget to visit the museum’s souvenir shop that sells copies of many ancient coins. 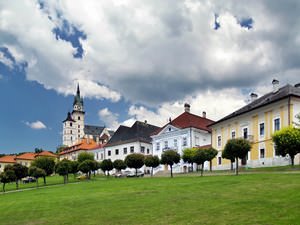 Tourists can easily get to Krenmica from the capital of Slovakia, the city of Bratislava. There are daily buses that depart from the capital to the Slovakian “gold mine”. The journey time is roughly five hours. A train ride from Bratislava to Kremnica lasts approximately the same time. A taxi ride or a ride in a rented car will be significantly faster. It will take almost twice less time to get to Kremnica.
This guide to iconic landmarks and sights of Kremnica is protected by the copyright law. You can re-publish this content with mandatory attribution: direct and active hyperlink to www.orangesmile.com.

City tours, excursions and tickets in Kremnica and surroundings

Survived castles around Kremnica
♥   Castle 'Šášov Castle' , 13.8 km from the center. On the map

National and city parks around Kremnica
♥   National Park 'Tatrzański Park Narodowy' , 100.1 km from the center. On the map

♥   Landscape Park 'Park Krajobrazowy Beskidu Śląskiego' , 107.7 km from the center. On the map

Search touristic sites on the map of Kremnica

Sightseeing in regions nearby Kremnica

Banska Bystrica
The area, which is now the territory of Banska Bystrica, was a perfect place for a prosperous city. The valley was incredibly rich in copper and some other materials, so the first mining attempts here date back to 2000-1700 BC. Moreover, the area was situated at the crossing of two important trading routes. During the medieval period, mining became a dominant industry in the ... Open »
Trencin
A strong fire and war destroyed the majority of the city’s historical monuments. However, a few of them have survived, and today thousands of travelers come to Trencin to admire its beauty. In the center of city lies Mierove nam Square. In 1712 here was installed a monument named Plague Column. This monument is the reminder of the tragic events of the early 18th century, ... Open »
Zakopane
It is remarkable that the ski resort began to attract travelers in the 19th century. Its infrastructure has been improved for more than a hundred years. Now it is almost perfect. It is worth noting that the resort attracts the attention of travelers not only in winter. In summer hiking enthusiasts prefer to relax here. They have a decent selection of beautiful places for ... Open »
Esztergom
The history of Esztergom is rich in events and various interesting facts. The Celts were the first settlers in the area. Later, Romans replaced them. The settlement got its first name – Salvio Mansio – during the reign of the Roman Empire. During the Migration Period, the Avar and German tribes liked the territory of modern Esztergom, and so they decided to settle here. ... Open »
Vysoke Tatry
As for other spectacular peculiarities of the resort area of Vysoké Tatry, a wide range of accommodation prices should be noted. Even the thriftiest tourists, as well as high-level recreation admirers, can choose a suitable hotel here. The flexible price policy relates not only to the local hospitality venues, but also to restaurants and entertainments. Now, at the resort, ... Open »
Poprad
In addition to skiing activities tourists have an opportunity to relax in one of the local restaurants or cafes, which are numerous in hotels and near ski bases. The city’s suburbs are truly remarkable and picturesque. There are many forests there which are considered protected areas. The northern part of city is the location of Tatra National Park. Move your feet to the ... Open »

All about Kremnica, Slovakia - sightseeings, attractions, touristic spots, architecture, history, culture and cuisine. Prepare your trip together with OrangeSmile.com - find out the 'must see' things in Kremnica, which places to visit, which excursions to take, where the breathtaking views are waiting for you. Planning your trip with this travel guide will help your to get the most out of Kremnica in few days.