Sightseeing in Trencin - what to see. Complete travel guide 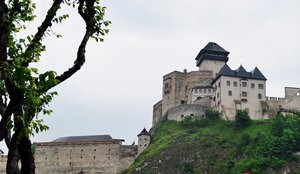 First mentions of this city date back to the 2nd century, when the Romans have created a fortified settlement Levkaristos on the place of the modern Trencin. In the beginning of the 11th century a fortress was built on the territory of the settlement. The owner of this place was a feudal lord Slovak Matos Chuck Trencin. The city got its name thanks to this fortress, which has been used as the main military base in Slovakia for many years. In the 15th century Trencin received the status of a free royal city. It was officially added to the country's territory only three centuries later.
A strong fire and war destroyed the majority of the city’s historical monuments. However, a few of them have survived, and today thousands of travelers come to Trencin to admire its beauty. In the center of city lies Mierove nam Square. In 1712 here was installed a monument named Plague Column. This monument is the reminder of the tragic events of the early 18th century, when hundreds of the city’s inhabitants have died from plague. A small alley starts in the western part of the park. The alley will bring you to one of its landmarks - the city gates. These gates are the symbol of the old city. They were built in 1534.
You can see a synagogue nearby. Currently the building undergoes restoration - the shrine was damaged badly during World War II and so it was in ruins for a long time. The majority of the architectural ornaments and stained glass windows are permanently lost, but some of them have been saved. To the south of the square you will find Farsky church. This magnificent building is a unique combination of Renaissance, Gothic and Baroque as its construction has lasted for several centuries. However, Trenčín Castle remains the main attraction for tourists. Nowadays Museum of History has been opened in the halls of the palace. The atmosphere of some rooms has completely preserved from the time of construction. This is one of the most important historical monuments in Slovakia. Copyright www.orangesmile.com
Walking down Matushovaya Street, you can see the Hangman’s House. Many incredible legends are associated with this historic building. It is the only medieval house that managed to survive on the territory of the city. During the 16th and 17th centuries, a municipal executioner resided in this house. There was a dungeon in the basement where prisoners had been waiting for an execution. Nowadays, a thematic museum occupies lower levels. Rooms on the top floors are used for temporary exhibitions. Local residents and museum staff believe that ghosts inhabit the old house. 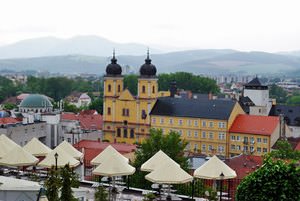 A bright baroque monument is the Church of St. Francis Xavier, located next to Peace Square. The construction of the church began in the middle of the 16th century and lasted for almost a hundred years. In the early 18th century, the interior decor was completely destroyed by a fire. Many unique religious values were destroyed. By the end of the 18th century, the church was completely restored, and has remained unchanged since then.
The Zupny Dom is definitely worth highlighting among other historical sites. It was built in the second half of the 18th century and provided a location of the County Office. Nowadays, the historic building houses the Trencian Museum - the main city's cultural institution. Its collection includes gatherings of valuable historical, archaeological and ethnographic items, as well as works of art of different periods. 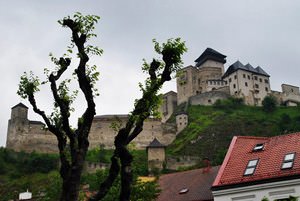 The Velka Yavorina mountain is popular among lovers of hiking. There is a wonderful viewing platform on its top. It will be nice to walk around and admire the panoramic view of the city in a warm season. In summer, excellent festivals and thematic events are held in the open areas. In winter, the mountain area turns into a popular ski resort, which will surely be appreciated by fans of winter entertainment.
Popular Nimnitsa thermal resort is located in the immediate vicinity of the city. It is worth a visit for every lover of spa treatments and wellness. The opening of the thermal center took place in 1959, after the accidental discovery of a valuable source of mineral water. Now, the thermal resort is distinguished by a modern infrastructure. There are beautiful lakes and other natural sights next to the complex.
This guide to iconic landmarks and sights of Trencin is protected by the copyright law. You can re-publish this content with mandatory attribution: direct and active hyperlink to www.orangesmile.com.

City tours, excursions and tickets in Trencin and surroundings

Survived castles around Trencin
♥   Castle 'Trenčín Castle' , 1.1 km from the center. On the map

National and city parks around Trencin
♥   Landscape Park 'Park Krajobrazowy Beskidu Śląskiego' , 109.5 km from the center. On the map

This small beautiful country is widely known for its magnificent alpine ski resorts and numerous natural and historic places of interest. The most famous historic landmarks are located in the capital of the country, the city of Bratislava. The oldest university in the country is also located here. This is Universitas Istropolitana that was open in 1465. Nowadays, only one faculty works in ancient buildings of the university - the faculty of scenic art. The Bratislava Castle is one more sight of the medieval period. First mentions of the castle belong to the 10th century. During its centuries-long history the castle was rebuilt several times and changed its design significantly, until it was completely destroyed by fire in 1811. The ruins remained untouched for more than a hundred years and restoration of the castle started only in the 20th century. These days, the castle provides space for treasury and the National Museum. … Open 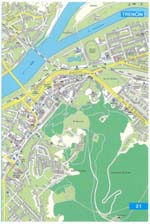 Search touristic sites on the map of Trencin

Sightseeing in regions nearby Trencin

Kromeriz
The kostel currently keeps multiple precious artifacts including the relics of Saint Vitus, Saint Morice who the bishop of Olomouc particularly praised during his life, and the relics of Saint Stephen. Monks, who work in the church, live not far from the main building of the shrine. The monks’ houses are located on the same square with the church and form a gorgeous ... Open »
Kremnica
The castle suffered much damage in a fire in 1560. After that, the mayor of Kremnica moved to another building, and the damaged residence became the town’s archive. The Count Chamber was another important part of the architectural complex. The host was responsible for the mint. The chamber didn’t survive until modern days because it became too ramshackle and was ... Open »
Banska Bystrica
Banska Bystrica is famous for its rich cultural life and abundance of monuments and architectural landmarks. The main city square dedicated to members of the Slovak National Uprising is one of them. The Slovak National Uprising Square or simply SNP Square is a great place to relax, shop for souvenirs, and dine in charming cafes. This is the location of another interesting ... Open »
Olomouc
It took twenty-three years to finish the new town hall, which finally opened in 1443. The building was remade and reconstructed several times in the coming centuries. The Town Hall that we can see nowadays is a three-story building with an attractive gothic hall and the Chapel of St. Jerome with gorgeous figural motifs. The seventy-meter-tall tower with the astronomical clock ... Open »
Ostrava
Ostrava is one of the oldest cities in the country, first mentions of which appeared in 1267. Ostrava was located on the crossroads of important trade routes, so until the 18th century it was known as a major trading city. Later deposits of coal were discovered on its territory. This fact has greatly fastened the industrial development of the region. Today several ... Open »
Brno
The town hall mentioned above is also known as one of the most notable sights of the city. The town hall hides the symbol of Brno – a stuffed crocodile. Why did such an exotic animal become the symbol of Brno? A crocodile first appeared in the city in the 17th century when it was brought there from Turkey. Local people were so amazed by the scary look of the unknown animal ... Open »

All about Trencin, Slovakia - sightseeings, attractions, touristic spots, architecture, history, culture and cuisine. Prepare your trip together with OrangeSmile.com - find out the 'must see' things in Trencin, which places to visit, which excursions to take, where the breathtaking views are waiting for you. Planning your trip with this travel guide will help your to get the most out of Trencin in few days.