Sightseeing in Bardejov - what to see. Complete travel guide 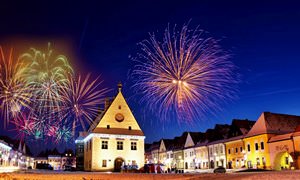 Widely recognized as a UNESCO World Heritage Site, the Slovak town of Bardejov is the oldest settlement in the region. This is a truly beautiful place that never ceases to attract new guests. Located in North-Eastern Slovakia, Bardejov is not far from the country’s border with Poland. The spectacular town is surrounded by majestic mountains and dense forests that attract guests like a magnet.
First settlers appeared in the area during the Stone Age, but the history of the town itself started in the 11th century when the first Slavic settlement was established here. According to historical records, the first mentions of Bardejov date back to 1241. This is the time when an important trading path from the east to Poland and German principalities was paved in the region. When King Charles Robert I, who was born in Hungary, was the ruler of this land, German colonizers from Saxon started settling in the territory of modern Bardejov. They quickly explored the area and surroundings. Bardejov officially became a town in 1320. In 1352, by order of King Ludovit I, the town got a protective tower and walls.
The end of the 15th century was the period of prosperity for Bardejov and neighborhoods. This is the time when many beautiful buildings appeared near the town’s central square. Many of these buildings have survived until our days. Nevertheless, the history of Bardejov had dark periods as well. The 17th and 18th centuries brought many troubles to residents of the town because their peaceful life was ruined by numerous wars and plague epidemics. Bardejov turned into a deserted and destroyed settlement. All protective walls were broken, and the moat around them was destroyed. Copyright www.orangesmile.com
The first railroad appeared in Bardejov in 1893. The road connected the town with Presov, but this fact didn’t have any positive impact on the development of Bardejov because the main transport routes were at some distance from it. This was not the only problem in the history of the town. A devastating blaze happened in Bardejov in 1902. Many buildings were destroyed in the fire. Many houses were restored, but they got new iron roofs that had a different style compared to traditional medieval roofs. Bardejov started developing actively again only after World War II. 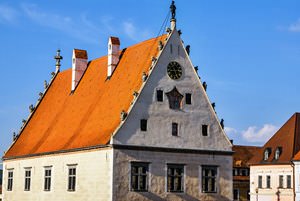 Why do tourists enjoy visiting this Slovakian town? First of all, having arrived in Bardejov, don’t forget to visit the Town Hall Square that is also the heart of the settlement. The history of this square dates back to 1320 when the local king allowed organizing fairs in the town. Naturally, events of this kind required much space. The choice was done in favor of this square. A town hall was added to it in the 16th century. This is how the square got its current name – the Town Hall Square.
The rectangular shape square has low rise buildings on the perimeter. Surprisingly, all these buildings have different architectural styles. The Basilica of St. Giles is certainly one of the most notable buildings in the central square. The shrine lost its original look after numerous renovations, but, nevertheless, it still attracts a large number of tourists. 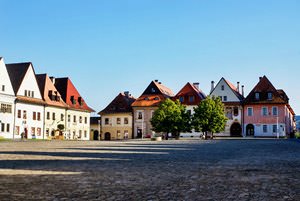 Many people say that the Basilica of St. Giles is not only an important landmark but also the most elegant building in Bardejov. It was built in the 14th century after the former monastery building had been completely destroyed. However, further events caused new damages to the rebuilt church. Later, royal builder Stefan managed to restore the important cultural landmark. That being said, this didn’t end the endless chain of reconstructions. A devastating fire, which took place in 1878, once again inflicted much damage to the basilica. Just like a phoenix bird, the gorgeous church rose from ashes.
It was decided to make Renaissance the main style for reconstruction. The look of the basilica is so unusual nowadays that everyone wants to take a look at this architectural miracle. Numerous sculptures decorate the cathedral. Chic and luxurious inner design, walls decorated with icons in gilded frames, and numerous drawings – it is incredibly interesting to explore the Basilica of St. Giles. However, gorgeous gothic altars still remain the biggest treasure of the shrine. There are eleven altars in total. It is hard to believe that these altars date back to the fifteenth century. Despite numerous damages and reconstructions, the altars are from the original church. 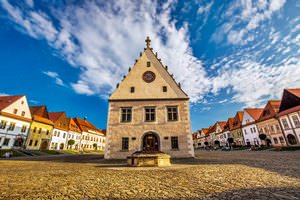 It is easy to reach Bardejov by car from many European cities. While the ride may be quite long, this is also an incredible opportunity to admire the beautiful landscapes of the region. There are no direct flights to Bardejov. It is possible to fly to Bratislava first and then use local transport to reach the town.
This guide to iconic landmarks and sights of Bardejov is protected by the copyright law. You can re-publish this content with mandatory attribution: direct and active hyperlink to www.orangesmile.com.

City tours, excursions and tickets in Bardejov and surroundings

Survived castles around Bardejov
♥   Castle 'Zborov Castle' , 6.8 km from the center. On the map

National and city parks around Bardejov
♥   National Park 'Magurski Park Narodowy' , 29 km from the center. On the map

♥   Landscape Park 'Popradzki Park Krajobrazowy' , 54.9 km from the center. On the map

♥   Landscape Park 'Park Krajobrazowy Doliny Sanu' , 55.9 km from the center. On the map

Search touristic sites on the map of Bardejov

Sightseeing in regions nearby Bardejov

Kosice
Besides visiting these places of interest you may enjoy observing City Theater. In front of its main entrance is located a music fountain. The theatre’s inner decorations are represented by molded ornaments and ceiling paintings made by Gakeb. Behind the theater are located a Town Hall, City Museum, former prison of Kosice and Plague Column. You can also consider visiting ... Open »
Poprad
In addition to skiing activities tourists have an opportunity to relax in one of the local restaurants or cafes, which are numerous in hotels and near ski bases. The city’s suburbs are truly remarkable and picturesque. There are many forests there which are considered protected areas. The northern part of city is the location of Tatra National Park. Move your feet to the ... Open »
Vysoke Tatry
Nowadays, almost 5 000 locals reside in the territory of the resort, and they are all engaged in the tourism sector. The first travelers started visiting these picturesque mountainous districts at the turn of the 19th to 20th century. The first upscale hotels, most of which still welcome guests, appeared more than a hundred years ago. The resort is popular all year round. ... Open »
Zakopane
The scenic city with its rich history also has the presence of prominent landmarks. That is why fans of excursion tourism will not be bored during their holiday. The city has several interesting museums and there is an incredibly interesting botanical garden. It represents a rich collection of plants that can be seen in the local woods. No matter what time of a year you are ... Open »
Krakow
Wawel Castle. Wawel Castle Ensemble is the most important symbol of Krakow. It was built in the center of a limestone hill, and many years ago it was the family seat of the Polish dynasty of Piast. This was the place from which the fate of Poland was decided for six centuries, because Krakow was the capital of Poland in the XVII century. Of course, a large number of ... Open »
Miskolc
In one of these halls, there is a collection of medieval weapons used during sieges and in battles. Another exhibition of the museum is dedicated to a collection of items discovered during the numerous archaeological excavations, which frequently took place in modern Miskolc. Visit the other two halls to learn more about the lifestyle and traditions of people who lived in the ... Open »

All about Bardejov, Slovakia - sightseeings, attractions, touristic spots, architecture, history, culture and cuisine. Prepare your trip together with OrangeSmile.com - find out the 'must see' things in Bardejov, which places to visit, which excursions to take, where the breathtaking views are waiting for you. Planning your trip with this travel guide will help your to get the most out of Bardejov in few days.