«« BEGINNING - PART I
Video of flights over top monuments of Prague in HD format.
Use 'Full Screen' mode.
Any review of the architecture of Prague would be incomplete without mentioning Tyn Church, National Museum, Staromestska radnice, Rudolfinum, Archbishop Palace and many others. The virtual flight over these monuments in HD (the video is on the left), the photo galleries of Prague, and the most interesting facts about every sight – we have carefully prepared lots of useful information for you. The overview architecture map of Prague at the bottom of the page will help you not to get lost in your sightseeing routes of Prague. So, let’s go! 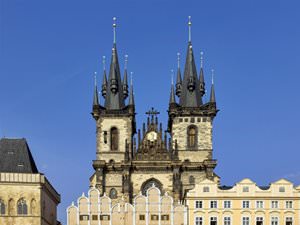 Facts:
» Tyn Church is one of the most famous symbols of the Czech capital. It’s called the Church of Our Lady of Tyn.
» Tyn Church can boast the oldest organ in Prague made by master Mundt in 1673.
» The temple is notable, as about 60 remains of great and unknown people lie there.
» Some gravestones in the church are damaged because many residents believe that they can get rid of toothache by stepping on the gravestone.
» At the beginning of the 15th century the main statue Tyn Cathedral lose its golden cup; one legend is associated with that. They say that once storks made a nest in this bowl. Birds need to be fed, so the storks took frogs into the nest; and sometimes amphibias fell out of the beak. Once a frog fell on some important person, and the latter was ridiculed by people. After this incident, the storks were evicted, and the cup was removed. 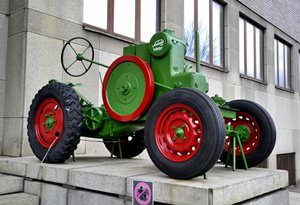 Facts:
» The National Museum was built in the early 19th century. To the date, the museum is the largest in Prague.
» National Museum is divided into several sections. The building on Wenceslas Square houses only the Museum of Natural Science and History and the Library.
» The historic room is located on the second floor of the building. It exhibits particularly valuable materials from archaeological sites, as well as coins and medals. The science department is situated on the third floor of the building.
» Collections of the Ethnographic Museum, the Museum of Musical Instruments, the Naprstek Museum and the Museum of Physical Culture and Sports are placed in other showrooms.
» Vaclav Hanka, who served as the first librarian of the National Museum of Prague, is famous for faking historical texts, passing them off as originals, thereby distorting Czech history. However, even after disclosure of Hanka’s crimes his works were placed in the museum, though not as historical documents, but as examples of romantic literature emphasizing the increase in consciousness of the Czechs. 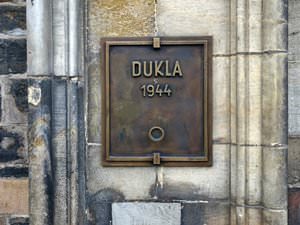 Facts:
» The Basilica of Santa Croce is located in the center of Florence and is one of the most popular monument of the city.
»  About 300 famous objects of culture, science and politicians are buried in the church. Among them are Galileo, Dante, Machiavelli, Michelangelo and many others. The construction of the tombs in the church is a marble bed with the figure of the deceased over the sarcophagus.
»  The basilica is famous for its frescoes made by Giotto. Initially, all the walls of the church were decorated with frescoes, but during the plague in the 16th century, when the church was used as a hospital, the walls were whitewashed. During the restoration, frescoes were re-discovered, including the works of Giotto.
»  The basilica is famous for its 16 chapels.
»  In this temple Leonardo da Vinci was baptized in 1452. 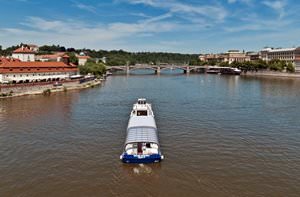 Facts:
» The Rudolfinum is the concert and exhibition hall in the downtown of Prague, on the square bearing the name of Jan Palach.
» The Rudolfinum has being a venue for Czech Philharmonic Orchestra concerts since 1946; that’s one of the main venues of the International Music Festival, Prague Spring, which is held each year in May and June.
» The building was designed by architect Joseph Zítek and his student Josef Schulz. The Rudolfinum was opened February 7, 1885.
» The building was named in honor of Rudolf, Crown Prince of Austria, who took part in the opening ceremony.
» Dvorak Hall in the Rudolfinum is one of the oldest concert halls in Europe. It’s known for its excellent acoustics. 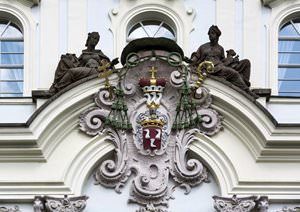 Facts:
» Archbishop's Palace is a four-story historic building built at the beginning of 16th century in the Baroque style. The venue is situated in the center of Prague, and serves as the residence of the Archbishop of Prague.
» Today, the palace is one of the most beautiful architectural landmarks of Prague.
» The palace was rebuilt and restored several times. Thus, the Renaissance-style palace was completely redesigned in the Baroque style in the 18th century.
» There is an amazing garden next to the palace, which, unfortunately, is closed to visitors.
» Special attention should be paid to the interior. The Throne Hall features beautiful tapestry work, and the dining room is decorated with portraits of the Archbishop of Prague, as well as other works by famous artists. 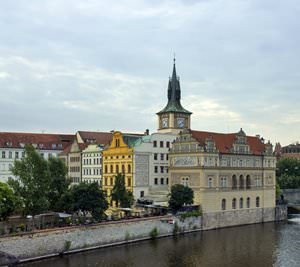 Facts:
» The Old Town Bridge Tower is the entrance gate to the Charles Bridge from the Old Town.
» The Old Town Bridge Tower is considered the most beautiful medieval tower in Europe.
» Facade towers are decorated with coats of arms of lands belonging to the Kingdom of Bohemia during the reign of Charles IV. Also, the tower is decorated with a statue of St. Vitus, the patron saint of the bridge.
» The Old Tower is a massive structure of defense type.
» Inside the tower there is a viewing platform, which you can visit from 10.00am to 6.00pm.

Facts: » Basilica of Saints Peter and Paul is the Catholic Church in Vysehrad (Prague) designed in the Gothic Revival style.
» The church is a kind of exhibition. History is the dominant element of its themed interior. Here you can see the history of art and the history of Christianity and the Czech lands.
» Bas-reliefs on the main portal are depicting scenes of the Last Judgment.
» The facade of the church has a memorial plaque in memory of the baptism of 14 Czech princes in Regensburg in 845 year.
» The main attraction of the basilica is stored in the third chapel. That’s the Virgin Mary of the Rain panel. The legend tells that the image of Mary was painted by St. Luke himself. In times of drought believers ask the Virgin Mary of rain and an abundant harvest.

Plan your own tour over Prague on the monuments map 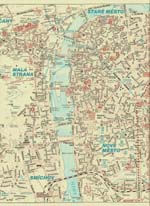 Search for architecture monuments of Prague on the map

Tours through neighbours of Prague

Dresden
The Frauenkirche, which is translated from German as the Church of the Virgin Mary, is one of the most significant Lutheran churches in Dresden. The modern building was rebuilt at the site of an old sanctuary in 1995. When it was being reconstructed, 40% of old construction materials were used. The original 95-meter church was destroyed completely in the period of the Second World War when Dresden was bombed in 1945. The church is the third ... Open »
Leipzig
In 1897, town authorities intended to open the New Town Hall. The main requirement is that the new building must resemble the former one. So, it was built in eight years. Its form is complex. There are three indoor patios (courtyards). The complex occupies 10 thousand m2. The opening ceremony was visited by the Saxon King. External walls are decorated with sculptures and bas-relief pictures. There is a 114-meter tower in the center of the ... Open »
Nurnberg
St. Lawrence’s Church stands on the foundation of ancient St. Lawrence’s Chapel. It dates back to 1235. In 1350, the construction of a full-fledged church began. It was during these years that an openwork stone rosette with a diameter of 10 metres was created on the facade between the two towers. Later, people started to call it St. Lawrence’s star. The towers of the temple often caused fires started by lightning that struck ... Open »
Vienna
The Rathaus serves as the seat for both mayor and city council of Vienna. The town hall made in the Gothic Revival style was built in the late 19th century. The main hall of the Rathaus is of great interest for tourists, as its length reaches 71 m. This room is decorated with sculptures of famous Viennese. The hall is often used for exhibitions, concerts and balls. In total, the Rathaus hosts about 800 events per year. The central tower of ... Open »
Salzburg
The Hohensalzburg Castle is a medieval fortress located on a high mountain. It was built in 1077. Originally, the castle belonged to archbishop Gebhardt I. The foundation is all that remains of that building. The castle has been rebuilt and strengthened and finally become a mighty fortress. In 1500, the world’s first funicular was constructed. They delivered different goods to the fortress. Over the years of its existence, the ... Open »
OrangeSmile.com - online travel reservation expert providing reliable car rental and hotel booking services. We feature more than 25.000 destinations with 12.000 rental offices and 200.000 hotels worldwide.
Secure Server