Sightseeing in Kosice - what to see. Complete travel guide 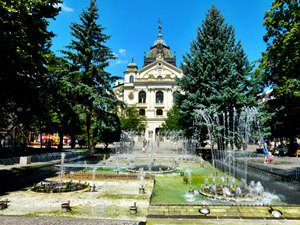 Kosice is a city located in the eastern part of Slovakia, at the foot of Black Mountain in the valley of the Hornad River. Kosice is the second largest city of the country and the center of the region with the same name. The population of the city reaches 235 thousand of people.
Excursion over cultural sights of Kosice - 'must visit' points of interest
Travelers are sure to enjoy a walk through the historic center of Kosice, as there is a huge number of interesting attractions. At the heart of the historic region is the Executioner's …

Open
The city is an important trading and industrial center of Slovakia. Here is also located the second largest university of the country.

Tourists will find numerous sights in Kosice with various gothic buildings being the most famous ones. The center of the city features a large pedestrians-only walking zone, where you can see a monumental St. Elizabeth Cathedral. Its building lasted for two centuries, starting from 1378 and up to 1508. The complex of cathedrals also includes Urban Tower and St. Michael Tower. There is a passage to the city’s underground behind this church. In the Medieval there were located protective facilities.
Besides visiting these places of interest you may enjoy observing City Theater. In front of its main entrance is located a music fountain. The theatre’s inner decorations are represented by molded ornaments and ceiling paintings made by Gakeb. Behind the theater are located a Town Hall, City Museum, former prison of Kosice and Plague Column. Copyright www.orangesmile.com
Your active city break in Kosice. Attractions, recreation and entertainment - best places to spend your day and night here
Kosice is a humble industrial town that can’t boast an abundance of nightlife and trendy shops. However, this picturesque corner of Slovakia has its own charm. Fans of eco-tourism and … 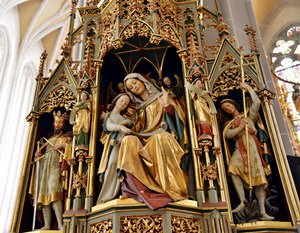 One of the most beautiful architectural monuments of the city is the building of the Old Town Hall. It was built in the late 18th century and represents a unique combination of two styles - Baroque and Classicism. Like many years ago, the building amazes with a beautiful finish of its facade; it retains skillful balustrades and columns in antique style.
Advices to travellers: what you should know while being in Kosice
1. Vacationers should observe basic safety rules. It isn’t necessary to walk through the deserted areas of the town in the evening; in public places you need to keep personal …

Open
On the historic street of Hlavná is a symbolic monument – Plague Column. The epidemic of plague hit the city in 1709 and claimed the lives of hundreds of people. In memory of this tragic event it was decided to mount a sculpture on the square, the main element of which is the figure of the Virgin Mary. 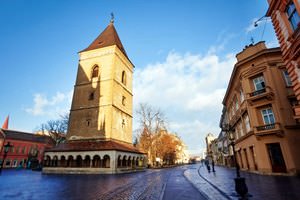 One of the most unusual city attractions is the House of the Beggar - a notable building of the 14th century, with which many interesting legends are associated. According to one of them, this house was built by one of the urban beggars. He was so skillfully engaged in begging, that it began to bring him a huge income. According to official data, this house was built for one of the wealthy merchants. Now on the first floor of the historic building, there are several interesting shops.
Extraordinary weekend in Kosice - unusual places, services and attractions for travel gourmet
…

Open
The building of the medieval prison Miklušova väznica, which was built in the 15th century, is also preserved in the city. Today it houses an interesting museum. In the prison, there are completely preserved old cells, a torture room, as well as an executioner's room where you can see his clothes and belongings. The executioner lived in the prison with his family. 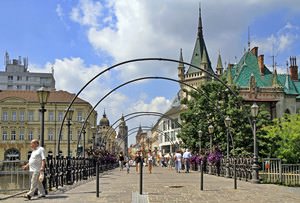 On the historic street Hrnčiarskej, there is a very interesting place called the Lane of Crafts. In the Middle Ages, there were workshops of the most famous artisans in the city. Several of these workshops are still in operation. Presently in these historical buildings, there are interesting souvenir shops. Here you can look into an old pharmacy and visit several excellent bakeries. It is here that many tourists go in search of original souvenirs and forgery in the national style.

This guide to iconic landmarks and sights of Kosice is protected by the copyright law. You can re-publish this content with mandatory attribution: direct and active hyperlink to www.orangesmile.com.
Kosice - guide chapters 1 2 3 4 5 6 7 8 9

National and city parks around Kosice
♥   World Heritage Site 'Caves of Aggtelek Karst and Slovak Karst' , 57.1 km from the center. On the map

♥   Landscape Park 'Popradzki Park Krajobrazowy' , 104.1 km from the center. On the map 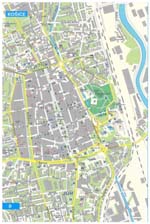 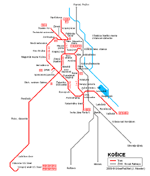 Search touristic sites on the map of Kosice

Sightseeing in regions nearby Kosice

Bardejov
Why do tourists enjoy visiting this Slovakian town? First of all, having arrived in Bardejov, don’t forget to visit the Town Hall Square that is also the heart of the settlement. The history of this square dates back to 1320 when the local king allowed organizing fairs in the town. Naturally, events of this kind required much space. The choice was done in favor of this ... Open »
Miskolc
In one of these halls, there is a collection of medieval weapons used during sieges and in battles. Another exhibition of the museum is dedicated to a collection of items discovered during the numerous archaeological excavations, which frequently took place in modern Miskolc. Visit the other two halls to learn more about the lifestyle and traditions of people who lived in the ... Open »
Poprad
In addition to skiing activities tourists have an opportunity to relax in one of the local restaurants or cafes, which are numerous in hotels and near ski bases. The city’s suburbs are truly remarkable and picturesque. There are many forests there which are considered protected areas. The northern part of city is the location of Tatra National Park. Move your feet to the ... Open »
Vysoke Tatry
As for other spectacular peculiarities of the resort area of Vysoké Tatry, a wide range of accommodation prices should be noted. Even the thriftiest tourists, as well as high-level recreation admirers, can choose a suitable hotel here. The flexible price policy relates not only to the local hospitality venues, but also to restaurants and entertainments. Now, at the resort, ... Open »
Eger
Nowadays, there is a museum in the Castle of Eger. The venue is named after Istvan Dobo. Visit this museum to find out more about the rich history of the magnificent castle. The mint is the main pride of this historical landmark, and every visitor has a unique opportunity to try to make a coin. Do you like archery? In this case, don’t forget to visit the shooting gallery ... Open »
Zakopane
Zakopane is an amazing city with a unique national atmosphere. It is a great place for those who dream about getting acquainted with the cultural traditions of Poland. Everything is gorgeous here: the typical local architecture, incredibly beautiful folk events and cuisine. There are many beautiful wooden houses, which are the location of many hotels, restaurants and other ... Open »

All about Kosice, Slovakia - sightseeings, attractions, touristic spots, architecture, history, culture and cuisine. Prepare your trip together with OrangeSmile.com - find out the 'must see' things in Kosice, which places to visit, which excursions to take, where the breathtaking views are waiting for you. Planning your trip with this travel guide will help your to get the most out of Kosice in few days.