Preparing your trip to Bodrum: advices & hints - things to do and to obey 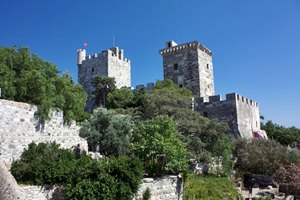 1. Many local residents cannot be photographed because of their religious beliefs. Therefore, before you make a photo of a local, make sure you ask for permission.
2. Do not forget to take your shoes off at the entrance to a mosque or a private house. Tourists, who plan to visit various religious attractions, should not forget to select their clothes carefully. Shorts, short skirts, sleeveless shirts and bright outfits are not allowed.
3. Despite the fact that simply every restaurant and cafe in the city offers its visitors a wide selection of alcoholic beverages, you can consume them in specially designated areas only. The appearance on the streets of the city in a drunken state is also not allowed.
4. Leaving tips in restaurants and cafes of Bodrum is officially not accepted, but staff will be surely grateful for any monetary reward. A tip of 10% of the total bill will be surely sufficient.
5. Local people have great respect towards their traditions and religion, so in no case should you criticize their way of life and question the significance of historical events of the country. Copyright www.orangesmile.com
6. Residents of Bodrum are hospitable and welcoming hosts. If new acquaintances or shop sellers invite you to have a cup of coffee, you should accept the invitation with gratitude. Any denial can really hurt hospitable people. Before you visit someone’s house, make sure you prepare modest souvenirs for hosts.
7. Do not forget to bargain in street markets and private trade shops. Bargaining will be irrelevant, probably, in large shopping centers and supermarkets only.
Old hotels keeping the history of Bodrum
Among Bodrum's hotels recreating the historical atmosphere, Hotel Atrium deserves special attention. A building occupied by the hotel is designed according to the model of an ancient Roman …

Open
8. Guests are not recommended to purchase jewelry and other expensive goods in open air markets. There are many fakes among the products offered for sale, and inexperienced travelers are at the risk of purchasing a cheap imitation at a very high price.
9. The city is distinguished by a well-developed public transport system. Day-time fares are valid from 6:00 to 24:00 if you travel by bus. At night the fare is two times higher than during a day.
10. Tourists, who have problems with the process of acclimatization, are not recommended to drink tap water. They also shouldn’t order drinks with ice in local restaurants. Tap water is not dangerous to health, but it may worsen the process of adaptation.
11. The best way to exchange currency is to visit a local bank. Tourists are also welcome to use the services of currency exchange offices. As a rule, they operate without weekends or lunch breaks. However, here we should note that the exchange rate in such offices may be less profitable. Also, prior to making a money exchange, you should pay attention to the size of commission charged.

Preparing your trip to Bodrum: advices & hints - things to do and to obey You can re-publish this content with mandatory attribution: direct and active hyperlink to www.orangesmile.com.
Bodrum - guide chapters 1 2 3 4 5 6 7 8 9 10 11 12

What to visit being in Bodrum - unique sights

Distance from Bodrum center - 1 km.
Construction of the mausoleum in the capital began long before the ruler's death in 353 BC. Best architects and sculptors of ancient Greece were invited to build and decorate this place. According to available data, several hundred talented artists took part in the construction of the mausoleum. The tomb featured an impressive scale. There was a spacious courtyard, decorated buildings, as well as fine bas-reliefs and sculptures. Stone figures of lions, exquisite sculptures of gods and goddesses, as well as formidable warriors statues have to be mentioned. … Read further

Tips for the cities around Bodrum

Kos
2. Kos is known for its clean environment, the island has repeatedly won awards because of it. Travelers must comply with the general rules: don’t leave any litter on beaches and in other inappropriate places, and don’t damage plants. For any violation a large fine may be issued. 3. All major resorts are open for tourists literally all year round. Tourists are encouraged ... Open »
Marmaris
2. Shop-a-holics should pay special attention to leather and ooze leather goods as these feature excellent quality. Imitation jewelry made of bronze and copper as well as precious metal wares are of immense popularity. At craft workshops one may order clothes creation and buy unique souvenirs. 3. Meanwhile clothes and souvenirs should better be bought at open markets then ... Open »
Samos
2. Tourists visiting the island for the first time are strongly recommended to get a map of the Samos island. The maps are provided free in the airport or these can be bought in any news stall. A cost of an island map will not exceed 1.5Euro. The map is provided free to those tourists who rent a car. 3. Despite summer temperature range hovering between 30C and 35C the heat is ... Open »
Faliraki
2. Going out for shopping it’s worth to stock up enough of small denomination bills, as it will be easier to pay for goods. You can bargain in private stores and souvenir shops, as it certainly will reduce the price. In large supermarkets and shopping malls bargaining is inappropriate. 3. Tourists shouldn’t forget about basic measures of caution. Don’t take valuables ... Open »
Rodos
2. The peak of the tourist season falls within a period from April till October thus a hotel for this period should better be booked in advance. Tourists planning a rich entertaining and touring vacation should better visit the island of Rhodes in spring as this season features mild weather and extreme heat will not interrupt the program of vacation. 3. Bicycle is a popular ... Open »
Izmir
2. Fixed prices on goods can only be in large supermarkets and department stores. Do not forget to bargain in private shops and markets. If the price of a product seems too high and the seller does not want to give in, you just need to say goodbye politely and leave the store. You can be sure that you will find a similar product at a much more attractive price in one of the ... Open »

Travelling to Bodrum - advices and tips. What should be provisioned in advance, the rules you might want to follow, and the things you better avoid doing in Bodrum. We help you to make your trip smooth and easy, with no unexpected surprises.