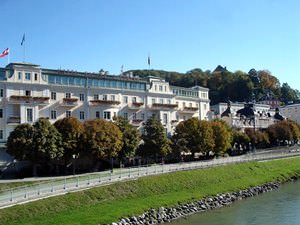 is present in the list of the outstanding historic landmarks of Salzburg. Located in the suburbs of the city, on the shore of Fuschlsee Lake, the hotel is open in a gorgeous old castle with rich and interesting history. In the 15th century, the castle was built for the Bishop of Salzburg. For many years, it was an official hunting residence of the prominent religious leader. During its long history, the magnificent castle changed many owners. During the World War II period, Schloss Fuschl belonged to Joachim von Ribbentrop, the Germany’s minister of international affairs, for several years. Therefore, many meetings of the Third Reich took place in this castle, and Adolf Hitler himself visited it several times.
Fans of films made in the middle of the 20th century know Schloss Fuschl because of one more important event – famous Sissi movie with Romy Schneider as the lead actress was filmed in the castle. Nowadays, everyone is welcome to spend several days in the legendary castle, and travelers have a fantastic opportunity to see numerous artifacts exhibited there. For many years, Schloss Fuschl has kept a rich collection of art and a collection of personal items of the Austrian empress. Copyright www.orangesmile.com
Hotel Schloss Mönchstein is open on top of Monchsberg Mount. The ancient castle-hotel is surrounded by a large park zone. It’s the oldest luxury hotel in Salzburg. During its long and respectable history, Hotel Schloss Mönchstein has won many prestigious titles and awards. Schloss Mönchstein is also the name of the famous Austrian cuisine restaurant awarded with two toques by Gault et Millau. The magnificent wine cellar is one of the advantages of the hotel.
Check the hotel prices and availability
Excursion over cultural sights of Salzburg - 'must visit' points of interest
Salzburg is home to numerous unique historical attractions. The beautiful Hellbrunn Palace never ceases to attract tourists. The famous place of interest was built in the middle of the 16th …

Open
The building, in which the hotel is open, was constructed in 1350 in order to strengthen the city’s protective forces. Later, the tower was rebuilt into a large fortress, and, after that, the building was used as a monastery. In different years, the castle greeted many famous scientists, artists, and noble people. For example, the princess of Lichtenstein spent several days there. As a hotel, the legendary castle served its first guests in 1948. Hotel Schloss Mönchstein is also the founding organization of European Castle Hotels Association. Several years ago, the historic hotel in Salzburg won the title of “the most charming city hotel in the world” by Hideaway Report.
Villa Trapp Check on the map. From Salzburg center - 3.8 km
The small Villa Trapp

also has an interesting history. Starting from 1923 and till 1938, the charming villa belonged to the Trapp family, the history of which is well-known to fans of The Sound of Music film. In 1947, the villa was abandoned and closed for visitors. Villa Trapp continued its miserable existence till 2008, when a hotel was opened in the old house. The design of the historic villa was made as close to the original as possible, so travelers are still able to admire priceless antique treasures and artworks. Villa Trapp offers 12 comfortable rooms for its guests and a gorgeous private garden that protects the villa from the noise of streets and traffic.
Check the hotel prices and availability
Hotel Sacher Salzburg , the opening of which took place in 1866, is a priceless historic landmark. Right after the opening, the hotel was operating under another name, Osterreichischer Hof, but since 1988 the hotel has been owned and managed by the Gürtler family. The design of the hotel was developed by the owner herself – Elizabeth Gürtler. Upon entering, guests will be amazed at numerous artworks and elegant designer decorations. The legendary old Sacher Salzburg café is open in the same building with the hotel. Thousands of sweet tooths around the world dream of visiting this famous café. It is believed that this café serves the authentic Austrian Sacher cake cooked in full accordance with the classic recipe.
Check the hotel prices and availability

This guide to legendary hotels in Salzburg is protected by the copyright law. You can re-publish this content with mandatory attribution: direct and active hyperlink to www.orangesmile.com.
Salzburg - guide chapters 1 2 3 4 5 6 7 8 9 10 11 12 13 14 15 16

Search hotels in Salzburg for your taste

Famous hotels in the region of Salzburg

Innsbruck
Without a doubt, Grand Hotel Europa is the most famous and high-class hotel in Innsbruck. For many years, this hotel has been chosen by various celebrities, politicians, and other prominent personalities. Prince of Monaco, Queen Elizabeth II, the Rolling Stones, and Sting were among the guests of this hotel. The most prestigious hotel in Innsbruck features elegant décor in an ... Open »
Vienna
The prestigious Austria Trend Parkhotel Schönbrunn Wien is open in one of the most beautiful palaces of Vienna. For many years, the palace was the residence of Emperor Franz Joseph. This was the place where he organized posh celebrations and important business meetings. As a reminder of the past, the hotel still has premium antique furniture, and a rich collection of old ... Open »
Prague
In Prague, travelers can find unique historic hotels, and each of them has many exciting stories and legends to tell to visitors. Palace Praha remains one of the most prestigious hotels in the Czech capital. It greeted its first guests yet in 1909. The hotel is open in a magnificent building made in a rare architectural style – spring art nouveau. The last extensive ... Open »
Budapest
It will not be a mistake to call St.George Residence a hotel museum. This residence is a member of the Historic Hotels of Europe Association. The building of the hotel was constructed 700 years ago. Later it was rebuilt many times and then finally opened under the name Fortuna Inn at the end of the 17th century. A hundred years later, in 1785, the city’s authorities decided ... Open »
Cologne
Excelsior Hotel Ernst is a hotel with the history of more than 130 years. This hotel has been operating since 1863, when the court restaurateur finished the building. Several years later, he sold the house to the Kracht family that has been taking care of the building since then. During its long history, the grand hotel has always attracted rich and famous guests. German Kaiser ... Open »
Dubrovnik
The building of Villa Agave is located on the top of a separately standing mountain. The villa is built on the ruins of the St. Lazarus Chapel of the 13th century. Two walls of the original chapel can even be seen in one of the guestrooms at the hotel. The former owners of the villa were carefully collecting antiquities and pieces of art. Thanks to their efforts Villa Agave has ... Open »
OrangeSmile.com - online travel reservation expert providing reliable car rental and hotel booking services. We feature more than 25.000 destinations with 12.000 rental offices and 200.000 hotels worldwide.
Secure Server