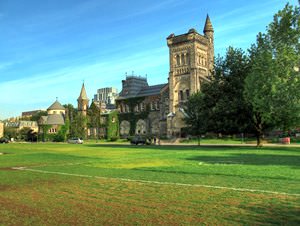 Toronto is a city of festivals; the whole its way of life is based on festive events. Dozens of festivals and national holidays take place here; their subjects are striking with diversity. Toronto Street Festival is especially popular among travelers. During it, a variety of fairs, exhibitions and entertainment events are held.
Excursion over cultural sights of Toronto - 'must visit' points of interest
Toronto is ready to offer its guests some fascinating excursions. It would take more than one day to see all attractions of the city. The most recognizable landmark is the CN Tower, every …

Open
The main celebrations take place on the Outdoor Art Exibition Toronto square; during the festival, lots of colorful tents are placed on it. Local craftsmen present their works of art at the each stall. The diversity of masterpieces isn’t just limited to paintings and traditional crafts. Anyone can take part in the festival, which is usually held in July. The large-scale street party usually lasts for three days.
A lot of young travelers visit Toronto in October. The city alters beyond recognition before the celebration of Halloween. In mid-October Screemers horror park begins to work, which is sure to impress fans of thrills. Until the end of October, the city hosts a number of mystical entertainment events and Screemers Park remains one of the major holiday destinations among tourists. Copyright www.orangesmile.com
Your active city break in Toronto. Attractions, recreation and entertainment - best places to spend your day and night here
Toronto is very popular among fans of outdoor activities, as the choice of entertainment here is literally unlimited. The city has one of the most famous and most visited zoos in the …

Open
The most striking and enchanting event in the cultural life of the city is the Caribana Festival, which usually starts in late July and lasts for more than two weeks. An amazing and bustling holiday with an abundance of costumed processions and solemn parades every year attracts thousands of visitors to Toronto. The festival name speaks for itself; it is dedicated to Caribbean culture. The event is famous for its fiery rhythms of music and an abundance of bright dresses. 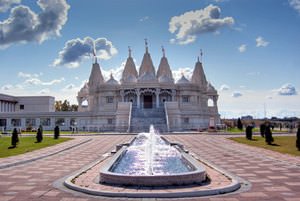 For several weeks, a modern Canadian city turns into a typical Caribbean resort where laughter and cheerful music are heard everywhere. The special child festival is held along with Caribana; its traditions are exactly the same as of adult holiday. Younger guests of the festival are offered to try unique outfits, to choose the queen and king of the holiday and to take part in fun competitions and contests for the most extravagant costume.

This guide to traditions and festivals in Toronto is protected by the copyright law. You can re-publish this content with mandatory attribution: direct and active hyperlink to www.orangesmile.com.
Toronto - guide chapters 1 2 3 4 5 6 7 8

Cathedrals and basilicas near Toronto
♥   St. Josaphat’s Cathedral, Toronto, 5.6 km from the center. On the map

♥   Cathedral of the Good Shepherd, North York, 7 km from the center. On the map

♥   National Shrine of Our Mother of Perpetual Help, Toronto, 9.3 km from the center. On the map

Unique landmarks in Toronto and around 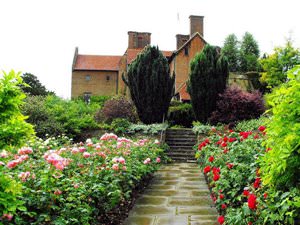 Distance from Toronto center - 31.6 km.
The old homestead of Winston Churchill, which is located in the small British town of Chartwell, is now accessible to all visitors. The farm is of great architectural value, besides, the farmhouse preserves many unique historical artefacts and personal belongings of the great politician. The unchanging form has been preserved in the painting studio, in which Churchill loved to spend time. In the magnificent court, the politician spent the last 40 years of his life and personally cares for the good condition of the establishment and the adjacent territory. … Read further 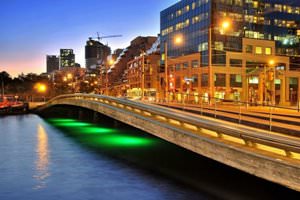 Distance from Toronto center - 11 km.
One of the most beautiful and outstanding embankments in the world is the Toronto Central Waterfront. It was made up by the best specialists from DTA and West 8 architectural offices. Over the last several years the waterfront has drastically changed. There were made special roads for pedestrians and cyclists, equipped leisure zones and children's playgrounds. The new embankment has spread for 4 kilometers forward. During the walk you will see lots of breathtaking constructions. … Read further

Colors of Toronto in photos

Traditions and festivals in cities around Toronto

Niagara Falls
The compositions are illuminated with more than three millions of small beaming lights each of them taking its specially allotted place. The compositions look much more impressive at nighttime that is why a major part of the entertaining events of the festival takes place at nightfall. The city of Niagara is often called the Honeymoon Capital of the World as the city is heavily ... Open »
Buffalo
Buffalo is a city with an interesting history. It has many peculiarities that make the city stand out of the list of other cities and towns of the state. For example, Buffalo is often referred to as the “snowy city” because it often snows heavily in winter. Early snow can appear already in the middle of October. As a rule, snow showers are the strongest in December. The ... Open »
Cleveland
It must be said that such entertainment never stays indifferent to residents of the city. Even a concert of an unknown musical band will certainly gather several hundred spectators. Social life is very important for Cleveland residents, they like and know how to have fun. They are also known for their love for beautiful and delicious food. The Win Festival, the Beer Festival, ... Open »
Detroit
Detroit is the Rock City, as is clear from the famous movie and KISS song. The city yet again confirmed its nickname by giving birth to two popular and significant personalities in the hard genre - Suzi Quatro and Alice Cooper. Detroit is also forever associated with the automotive industry: Ford, Chrysler, General Motors - these are all the companies that brought glory to the ... Open »
Ottawa
Ottawa residents are rather accurate and punctual. Despite a reason of a meeting one should come in time in any way. Local companies and offices feature strict rules and regulations of time tables and working hours, thus coming late to work may well become a cause of dismissal of an employee. Setting off to a shopping tour tourists should keep in mind that bargaining at local ... Open »
Montreal
The audience of the festival numbers more than two millions of participants. Music fans are not stopped either with cold weather, or with long distances to overcome to visit the festival and enjoy the music of their idols. The festival was established by Alain Simard and Andre Menard. In search of original and exciting summer entertainment these two men decided on organizing a ... Open »

Cityguide on traditions, mentality and lifestyle of people in Toronto. Learn the best periods to visit Toronto to discover its soul - authentic festivals, events and celebrations. We will also reveal the interesting habits, attitude towards the world and to tourists in Toronto.