Detailed hi-res maps of Maastricht for download or print 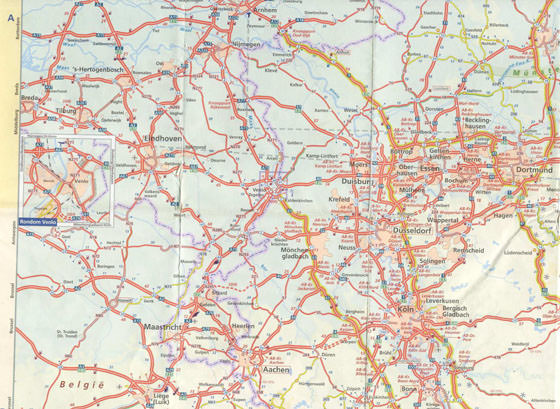 Search for services, infrastructure and sights on map of Maastricht

Our guide chapters over Maastricht

Even though Maastricht is a relatively small town (its population is approximately 122,000 and its area is almost 60 square kilometers), the city is distinguished by the atmosphere of a capital and a large international center. Dutch, French and German, along with the local dialect are the leading languages here. The city is rich in culture, history, monuments, folklore and traditions. Every year Maastricht is … Open

The City Hall, the construction of which took place in the middle of the 17th century, is a wonderful place of interest and a great example of the Baroque style. Near the City Hall are located numerous mansions and historic buildings that have been built on different times and, thus, feature various architectural styles. Among the cultural institutions of the city we should definitely mention Bonnefantenmuseum. … Open

Backstage is a popular night club, which is opened in an old factory. In the club you can hear music of different directions. Here are often organized themed and retro-parties that are popular not only among visitors, but also among locals. In addition to a wonderful dance floor and interesting musical program, Backstage can offer to its visitors a great bar. There is also a gaming room in the club with a large … Open

The desing of D'Artagnan restaurant is reminiscent of an old French tavern. This place will please not only fans of the famous musketeer, but also those, who cannot resist the aroma of French dishes. This restaurant also offers large choice of wine. Its menu is regularly updated and supplemented by original chef’s dishes. Witloof restaurant is a great place to order dishes from the Belgian cuisine. Mussels … Open

An unusual location is one of advantages of the high-class Chambres D'Hotes Rekko. This hotel is open in a fully restored building of an old leather factory. Many original elements of the design were preserved during the restoration works, so even nowadays guests can see old brick walls in rooms. Moreover, there are charming mansard type rooms with wooden beams on the top floor of the building. The elegant façade of … Open

Traditions and mentality of Maastricht

Of course, the southernmost city of Holland is distinguished by special national features. Its residents cherish the traditions and customs of their ancestors. You will understand this if you visit the city during one of national holidays. Thus, Maastirht is the only city in the country where is organized Christmas market. For several days the city transforms into a colorful bazaar. During the days before Christmas … Open