Detailed hi-res maps of Roermond for download or print 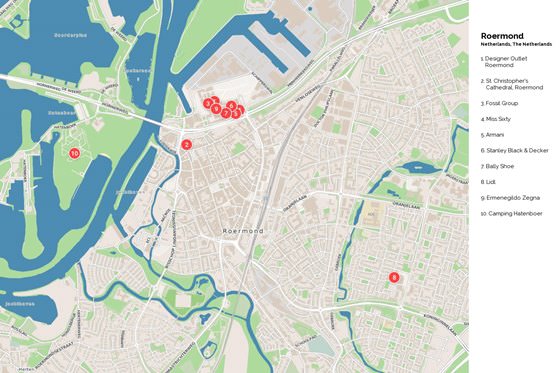 The actual dimensions of the Roermond map are 1530 X 1018 pixels, file size (in bytes) - 318327. You can open this downloadable and printable map of Roermond by clicking on the map itself or via this link: Open the map. 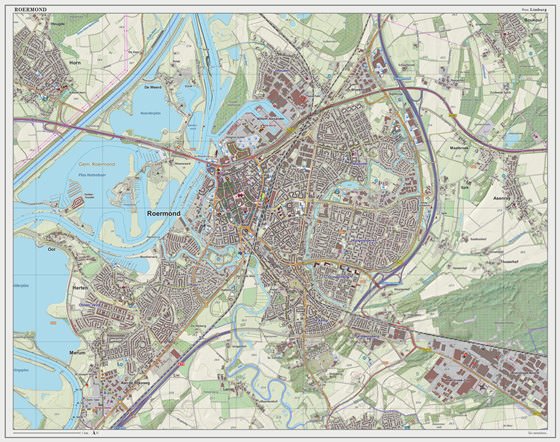 The actual dimensions of the Roermond map are 2514 X 1984 pixels, file size (in bytes) - 1695252. You can open, download and print this detailed map of Roermond by clicking on the map itself or via this link: Open the map.

Search for services, infrastructure and sights on map of Roermond

Our guide chapters over Roermond

The name of the city can be translated as “Roer’s horn”. Of course, the city’s name is not random. The Dutch settlement is built in the place where two rivers – the Maas and Roer – merge. The first mention of Roermond dates back to 1204. According to historic documents, the town was destroyed just ten years after its foundation when the German troops tried to capture it. It took several decades … Open

Maps of Maastricht
Every year in February, one of the most colorful and crazy events of Holland takes place here - the Carnival. It lasts for three days - from Sunday to Tuesday, but locals usually stretch out their pleasure for at least a week. Just imagine: people specifically take leave to start drinking at 11 am in the company of bees, ducks, superheroes and Hello Kitty. Needless to say, ... Open »
Maps of Eindhoven
Eindhoven is informally called the City of Light; this name is due to the important historical event which has radically changed the fate of the place. In 1891, Anton and Gerard Philips have opened there a small factory producing light bulbs; today the city is home to one of the largest electronic corporations. This important historical event associates with the major cultural ... Open »
Maps of Aachen
The comparatively small Aachen can boast with an amazingly rich history. Today Aachen is known as a major university center and a venue for one of Germany's brightest holidays. The Aachen Carnival will fill the historical center of the city with colorful columns of clowns, musicians, witches, and grenadiers. A cheerful whirlpool of various-caliber cultural events begins with ... Open »
Maps of Dusseldorf
The City of Twenty Minutes (that is an informal name of Dusseldorf given due to the well-planned transportation system) attracts its numerous guests by one more colorful festival. This is an event that has a very simple name, Düsseldorf Festival! It takes place in the middle of September. In the past, the festival had another name, Altstadtherbst. Burgplatz is the location of ... Open »
Maps of Duisburg
The beginning of August marks the start of a large gastronomic event that is called Weinfest. It is a street festival that usually takes place on Königstraße. Best winemakers from all regions of Germany visit this festival to offer their wine to numerous visitors. Despite the fact that local people usually prefer wine, the Bacchus’s drink and the festival dedicated to it ... Open »
Maps of Liege
Among local music festivals, The Organ Festival stands out. It is held at the beginning of October when the best European organ players gather in Église Collégiale Saint-Jacques and use their skills to entertain those wishing to hear great organ music. At the same time, that is, in early October, you can listen to the music of other genres such as jazz, blues, and classical ... Open »
OrangeSmile.com - online travel reservation expert providing reliable car rental and hotel booking services. We feature more than 25.000 destinations with 12.000 rental offices and 200.000 hotels worldwide.
Secure Server