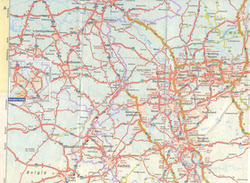 Interactive maps of hiking and biking routes around Maastricht

1. You can zoom in/out using your mouse wheel, as well as move the map of Maastricht with your mouse.
2. This interactive map presents two modes: 'Biking Routes' and 'Hiking Routes'. Use the '+' button on the map to switch between them.

This Maastricht map has two modes: 'Railway Network' and 'Landscape & Rural Map'. Use the '+' button on the map to navigate.

The Netherlands is a country of lowlands. The majority of its territories are below the sea level, and therefore the local inhabitants had to take back their own lands from the seas for centuries. Today, many dams, castles and fortifications remind about protecting the coastline from flooding. Only 2 percent of the Netherlands’ lands are above 50 km above sea level. If there were no fortifications, the half of the country would be under water. However, it was a war with the sea that gave the state such a large number of recovered fertile lands, where today legendary tulips and other flowers grow. In the Netherlands, there are lots of reservoirs and river arteries. The largest rivers are the Rhine, the Meuse, and the Scheldt. … Open

Our guide to Maastricht

Maastricht for children - what to visit

Natural History Museum is one more place, a visit to which would fascinate travelers with children of all ages. This museum, which is open in a beautiful historical building, offers interesting educational excursions for children. During such excursions, they will be able to see the skeletons of prehistoric animals, examine an interesting collection of butterflies, and even watch colorful fish in the aquarium. A … Open

Without a doubt, Zenden Design Hotel is one of the most unusual hotels in Maastricht. This comfortable hotel occupies a complex of three fully restored old buildings. Behind the classic looking façade, travelers will find a unique designer décor. The design, which is made in the shades of white, was developed by Wiel Arets, a famous designer and architect. Guest rooms are made in minimalist style and feature … Open

If you’re on a budget or simply do not want to spend much, shops located in Wyck district would suit you better. The shops in this part of the city have a lot more democratic prices. Besides clothes, one can buy interesting souvenirs. There are pavilions with classic and inexpensive souvenirs, and there are more interesting souvenir shops that sell exclusive handicrafts. Fans of vintage will be excited with … Open

Hotels with history of Maastricht

Kruisherenhotel Maastricht has already become a true local landmark. This hotel is open in the building of an ancient Gothic monastery. Even after a thorough restoration, the medieval building hasn’t lost its special atmosphere and many authentic decor elements. All guest rooms are made in individual style and come with interesting designer accessories. Massive beams on the ceiling, original hand-painted … Open

9. Soft drugs are best to be purchased in specialized shops. Do not buy them from street vendors for security reasons. 8. There are many car rentals in the city, which differ in both rates and rules. People under the age of 21 years can be denied to rent a car, as well as people who received a driving license less than two years ago. In some car rental offices the age limit is between 23 and 25 … Open

You can have a good time in the open air and enjoy active entertainment in the City Park, which is located near the ancient fortress. This park is beautiful at any time of the year, in the summer here you will always find carousels for the youngest, and also equip playgrounds for older children. On the territory of the park there are beautiful picnic areas, in the warm season there is a café and regularly conduct … Open