Detailed hi-res maps of Haarlem for download or print 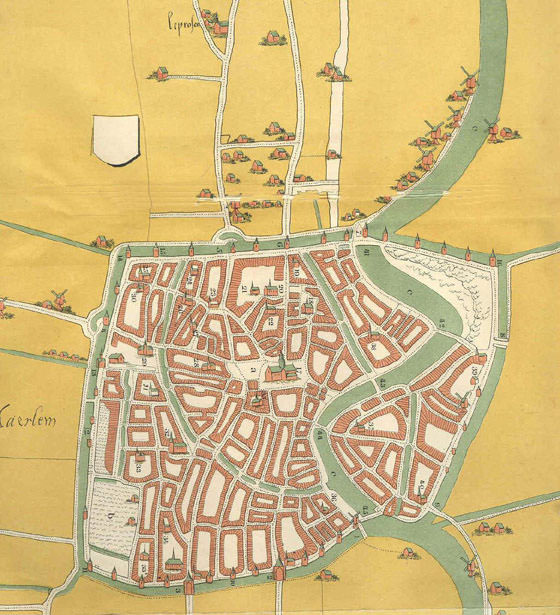 Search for services, infrastructure and sights on map of Haarlem

Our guide chapters over Haarlem

Festivals and events in Haarlem

On May 5, one of the city's main musical events takes place - a festival with an interesting name of Bevrijdingspop. The festival is timed to celebrate Liberation Day in the Netherlands, and in Harlem, this event acquires a musical sound. You can listen to music of radically different genres - rock, rap, classic or even techno rave. At the festival, you can also enjoy a special program for the youngest citizens. In … Open

Among the budget hotels in Haarlem, there are also a lot of establishments that are distinguished by a romantic atmosphere. At the peak of popularity for many years now is the mini-hotel Bed and Breakfast L Anders. The hotel is located in the very center of the historic district, on the Grote Markt square. It has only 4 rooms to offer and each of them is unique; they have very beautiful parquet floors and designer … Open

Harlem is also ready to please fans of active pastime. Here there is every opportunity to entertain yourself with water activities. For example, cruises can be offered by Haarlem Canal Tours, Smidtje Canal Cruises, Club Spaarne, and De Waterkoets. Trying this type of recreation is definitely worth it - besides the fact that it brings only pleasant impressions, this is a great opportunity to take a break from … Open

Among the most unusual shops of Haarlem we must allocate The Sting. At first glance, it resembles an ordinary clothing store. But enter it and look around and you'll be amazed by a variety of colorful and original things. This store will appeal to modern trendies. They sell really bright and original things ar affordable prices. For example, you can buy a colorful T-shirt for 20 euros. Café Biessels is not just a … Open

Haarlem’s true historic landmark is a 17th-century building that houses the Teylers Apartment anno 1608. The apartments are designed for four guests and are distinguished by their exceptional design, which is a harmonious combination of elements of ancient decoration and modern fashionable decorations. Dazzling wooden floors and fragments of old stone walls, beamed ceilings and an abundance of beautiful light … Open

Haarlem for children - what to visit

Sports entertainment is very common in Harlem, and will certainly interest tourists with teenage children. In the warm season, holidaymakers always have the opportunity to engage in kayaking or organize an interesting boat trip, and one more common entertainment, cycling. It is difficult to attract children to visit classical historical sites, but they will enjoy the fascinating excursion on bicycles. You can rent … Open