Detailed hi-res maps of Apeldoorn for download or print 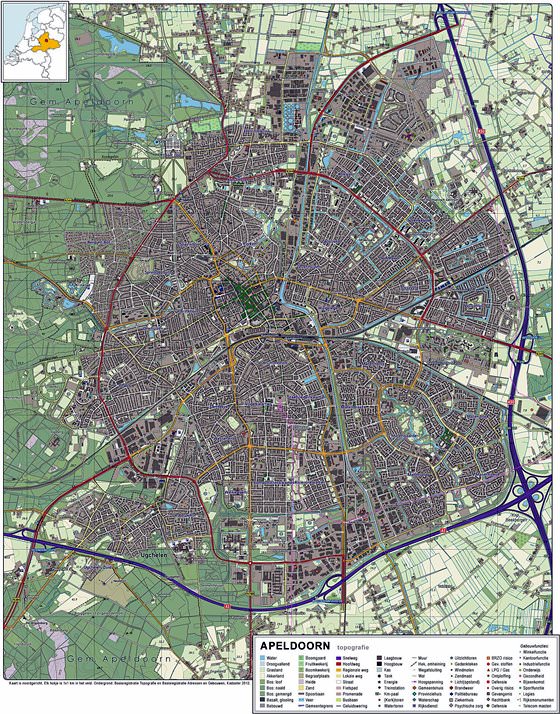 Search for services, infrastructure and sights on map of Apeldoorn

Our guide chapters over Apeldoorn

Zenzez Hotel & Lounge situated in a forest is a very unusual accommodation place. It occupies a spectacular modern building, the facade of which is decorated in black and white. The rooms are painted in pale colors and decorated in different styles. Some of them feature wicker furniture in rustic style, while others boast with leather chairs and sofas in the style of yesteryear. There are also several romantic rooms … Open

The most popular clothing store is Noa Noa. It will appeal to those who prefer items of younger style. This store features beautiful pastel clothes, spectacular sports jackets with designer prints, comfortable shoes in sporty style and original bags. Apeldoorn has one of the largest markets in the Netherlands. A walk along it will surely be unforgettable. On the market, there is a wide range of seasonal vegetables … Open

Hotels with history of Apeldoorn

A history of a luxury Bilderberg Hotel De Keizerskroon is also very interesting. Originally this building belonged to Queen Wilhelmina. Today, it’s ready to offer its guests 90 modern rooms, almost all of which have panoramic windows and small furnished balconies. A real pride of the hotel is an upscale restaurant, where you can taste the most popular national specialties, including salmon. Connoisseurs of … Open

5. It is very comfortable to explore Apeldoorn by car. In order to rent the vehicle, tourists need an international driving license and a credit card. Drivers, who obtained their license less than two years ago, might not be able to rent a car. 6. Apeldoorn has a well-developed public transport system. It is possible to reach virtually any place of interest by bus. To pay for public transport, … Open

Apeldoorn for children - what to visit

Park Berg en Bos is perfect for a relaxing holiday in a picturesque natural setting. It is a quiet and peaceful park with many beautiful plants and ancient trees. In summer, the park is decorated with many flowers. Here among the thickets, there are beautiful artificial waterfalls, as well as equipped picnic areas, where you can comfortably rest all day. Little fidgets will definitely enjoy the tower located in the … Open

Van der Valk Hotel Apeldoorn - de Cantharel won’t disappoint travelers who want to spend a few days in atmosphere of comfort. There are spacious superior rooms with full-size panoramic windows and an open bathroom. The hotel has its own wellness center that features a Turkish bath and massage parlors. Active travelers will appreciate a private horse-riding school. An incredible building resembling a romantic … Open