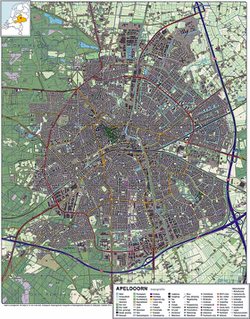 Interactive maps of hiking and biking routes around Apeldoorn

1. You can zoom in/out using your mouse wheel, as well as move the map of Apeldoorn with your mouse.
2. This interactive map presents two modes: 'Biking Routes' and 'Hiking Routes'. Use the '+' button on the map to switch between them.

This Apeldoorn map has two modes: 'Railway Network' and 'Landscape & Rural Map'. Use the '+' button on the map to navigate.

The Zuid-Kennemerland National Park is visited annually by more than 2 million people. It is located on the seashore. The place borders with a beach that is not part of the protected lands. This is a very picturesque nook with dunes and beautiful deciduous and coniferous forests. The park is home to a large number of foxes, rabbits, and deers. Local workers have developed a special breed of cows, the Scottish longhair. There are also several lakes in the park, as well as the ancient Dainulust castle dating back to the 19th century. Several tourist trails and bike routes have been laid along the territory for the convenience of tourists. … Open

Our guide to Apeldoorn

Hotels with history of Apeldoorn

A history of a luxury Bilderberg Hotel De Keizerskroon is also very interesting. Originally this building belonged to Queen Wilhelmina. Today, it’s ready to offer its guests 90 modern rooms, almost all of which have panoramic windows and small furnished balconies. A real pride of the hotel is an upscale restaurant, where you can taste the most popular national specialties, including salmon. Connoisseurs of … Open

7. Local people care about the environment, and tourists should respect this tradition. It is prohibited to throw litter or neglect rules stipulated in the park. 8. Extravagant and too bright outfits are not typical for streets of the city. Local people might not understand tourists who look too fancy. 9. Local people love animals, so they prefer not to wear leather clothes, leave … Open

For interesting memorable gifts you can go to Cardzstore & More store, which is especially popular among ladies. Here, is a large choice of porcelain, beautiful dishes, various interior decorations and, of course, affordable prices. Besides, they offer important travel accoutrements, including maps of the city containing remarkable sights. The most unusual shops in the city are concentrated on Asselsestraat … Open

Zenzez Hotel & Lounge situated in a forest is a very unusual accommodation place. It occupies a spectacular modern building, the facade of which is decorated in black and white. The rooms are painted in pale colors and decorated in different styles. Some of them feature wicker furniture in rustic style, while others boast with leather chairs and sofas in the style of yesteryear. There are also several romantic rooms … Open

Apeldoorn for children - what to visit

Park Berg en Bos is perfect for a relaxing holiday in a picturesque natural setting. It is a quiet and peaceful park with many beautiful plants and ancient trees. In summer, the park is decorated with many flowers. Here among the thickets, there are beautiful artificial waterfalls, as well as equipped picnic areas, where you can comfortably rest all day. Little fidgets will definitely enjoy the tower located in the … Open

Van der Valk Hotel Apeldoorn - de Cantharel won’t disappoint travelers who want to spend a few days in atmosphere of comfort. There are spacious superior rooms with full-size panoramic windows and an open bathroom. The hotel has its own wellness center that features a Turkish bath and massage parlors. Active travelers will appreciate a private horse-riding school. An incredible building resembling a romantic … Open