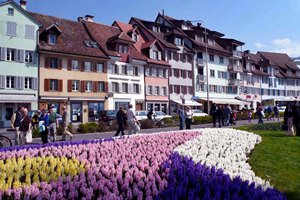 The climate of Switzerland is moderately continental. The peculiarity of the country is its landscape. More than 62 percent of the territory is occupied by mountains, so in some parts of Switzerland winter does not end even in summer. The climatic characteristics of the territory directly depend on its height above sea level. The mountains are a natural barrier to the cold Arctic air masses. The country is characterized by cold winters in mountainous areas, and hot summers in plains. Every year, a lot of precipitation falls in Switzerland. Almost throughout the whole territory, the average temperature in winter is about 1 degree below zero, and in summer, the temperature rises up to 25 degrees Celsius. At night, the temperature can drop to +10C. In the south of the country, the weather remains unchanged at any time of the year. The largest amount of precipitation a year falls in the southern part of Switzerland.
Things to do in Switzerland - active leisure
The main activity in Switzerland is ski tourism. More than 60 percent of the country's territory is occupied by the Swiss Alps. That's why winter …
Read further
Winter in the highlands of Switzerland is snowy and cold. In some regions, snow lasts for more than six months. Such climatic conditions contribute to the development of ski tourism. Lowland in the mountainous areas is constantly shrouded in fog, but it is always sunny and warm in highlands. Winter in the plains is less severe. Snow in Bern and Zurich lies no more than two or three weeks. In Geneva and in Lausanne, it is snowy even less. Near the Italian border, there is no snow at all, and lakes are almost never covered by ice. The beginning of spring in Switzerland is quite cold. However, by the middle of April, all the vegetation begins to bloom and the air is filled with incredible scents of magnolias, tulips, and camellias. The air temperature rises gradually, but the snow does not melt. The warmest cities are Geneva and Zurich; the average temperature in the middle of spring rises to 16 degrees Celsius. The rainy season begins at the end of April. By the end of May, the air temperature is rising up to +19 degrees in the warmest regions.
Summer in Switzerland is a contrast; in the daytime it is hot and it's cold at nighttime. There is a high humidity, often rains in Swiss valleys. The air temperature ranges from 20 degrees Celsius to 25 degrees Celsius, but at night the thermometer can drop down to 9C even in the warmest cities. During the day, the weather is even hotter in the south of the country. On average, the maximum temperature is 32C. Such heat is felt quite comfortably. Lake Geneva warms up to 20 degrees in the heat of summer, while in other lakes the water is much warmer. Lugano lake is considered to be the warmest; its water temperature is +26 degrees. In the lowlands of the mountains, alpine nature is very picturesque in summer; in the daytime the temperature is about 15 degrees Celsius. The maximum summer temperature in the highlands is +10C. With the beginning of autumn, hot weather in the southern regions recedes; it is replaced by a comfortable warm one. Precipitation is significantly less than in the summer. However, the weather becomes gloomy since the middle of October. The season of snowfalls begins in the Alps. The mountains are covered with a thick snow layer. At the end of November, short-term frosts are possible even in the south, and the weather becomes windy and damp. Copyright www.orangesmile.com

Top periods for vacation in Switzerland 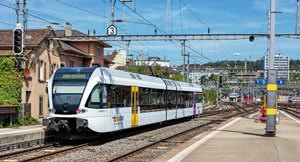 Switzerland attracts millions of tourists every year with its incredibly beautiful alpine nature and great lifestyle. At the same time, every traveler perceives the country in a special way. Vacations are great all year round. First of all, Switzerland is a country of high-quality winter recreation. The abundance of delightful ski resorts can impress even an experienced and selective tourist. The height of the ski season falls precisely on the New Year and Christmas holidays. The magic spirit of the upcoming festivities is hovering in the snow-covered mountainous areas. Sales starts and the stores in big cities are crowded with customers. In this case, it is worth considering that Switzerland is a country for recreation of wealthy people, but even they can be shocked by enormous prices for services in the New Year's period.
Top chic accommodation you can find in the country
The luxury hotels in Switzerland, deserving attention of the most discerning traveler.
Read further
Besides winter holidays, a huge tourist influx is also observed in the middle of summer. Vacations at places with picturesque nature and repairing the health in thermal spas enjoy great popularity. The beach season on Lake Geneva lasts from the middle of summer to the end of August. In other lakes, the water warms up much faster, so you can swim from the very first days of June. July is the perfect time of the year in Switzerland for yachting, windsurfing, golf, and other sports activities. Many tourists choose Easter vacations for a holiday in Switzerland, despite the fact that the weather at this time of year not always invites to rest. Rains begin, and the air temperature still does not warm up to a comfortable one. You can stop in any resort town on Easter. The frosty weather in Switzerland makes it possible to buy tours for more affordable prices. 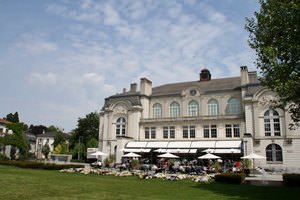 Despite the fact that in the off-season the tourist flow is dropping, places in hotels should still be booked in advance. That’s because the most active time for the business sector is coming. From April to the end of June, it's time to go on tours and visit natural and architectural monuments of the country. From September to October, various sports tours are very popular, including trekking in mountains, mountaineering, paragliding, and canoeing. You can go to the south of Switzerland even in autumn, as the exhausting heat there is already over. The weather will become fair and comfortable to get acquainted with the lush subtropical vegetation.

1. You can zoom in to Switzerland using the '+' button, or check temperatures around the globe by the '-' button.
2. Besides this, you can grab the map by your mouse button and move it to see the temperature in other regions.

Sightseeing of Switzerland in photostream

Zurich
3. Taxi rates are quite low, so this type of transport can be a good alternative to buses. Prices rise only in the evening. 4. Make sure you check the compatibility of all electrical appliances you plan to take with you before the travel. The line voltage is 220V. 5. Leaving tips is customary in large restaurants only. You are free not to leave any rewards to waiters in cafes and bars. The usual size of tips is 5 - 10%. 6. Those tourists, who expect to travel around the city a … Read more

Geneva
3. There are a lot of pedestrian zones in the city, so you should not deny yourself from the pleasure of walking on these beautiful places. 4. The majority of residents and tourists prefer other types of transport like bikes. Motorists are very attentive to cyclists, and you can reach virtually any part of the city using your two-wheeled friend. Not very comfortable cobblestone streets are the only obstacle on the way of a cyclist. 5. The period from July to August is the best time to … Read more

Interlaken
3. Coop is a famous store that is popular not only with shoppers, but also with gourmets. In the morning hours the restaurant, which is located on the second floor, serves buffet type breakfasts. A delicious breakfast will cost approximately 11 francs. 4. Swiss watches and knives remain the most popular souvenirs with travellers. The best way to buy them is to go to specialized shopping centers. Many stores offer buyers to put engraving to the purchased goods. This service is free. 5. … Read more

Luzern
3. Tourists wishing to use the public transport for cruising the city and visiting the tours, should better buy a pass ticket Swiss Pass. It gives the right of free rides in public transport and discounts for tours visiting. The pass is available for purchase in tourist information center or in some hotels. 4. Bicycle is one of the most popular city transports. The main rental center of two wheel transportation means is placed in the area of railway station. Along all the major roads of the … Read more

Basel
3. When you visit various excursions together with other tourists in a group, you are eligible for a discount, so the best place to explore the sights of the city is in a company of other travelers. Students and pensioners are also eligible for a discount. 4. If you plan to make a long walk, you are recommended to take a raincoat or an umbrella with you. Weather in Basel is quite variable, so a small rain can start even on a hot sunny day. 5. Local chocolate, watch and pocket knives … Read more

Locarno
3. Prudent tourists apart from numerous restaurants and cafés should also pay attention to cookeries and gastronomies placed around the major shopping centers. There one can buy take away hot pastry and salads. The quality of foods in such establishments is still extremely high. 4. The tours are advised to be taken in groups as in this case the tickets will cost much less. Travelers who want to visit the major city landmarks and check out the entertaining program of the city should visit … Read more

Lugano
3. It is rather convenient to cruise the city by bicycle. Also the cycling tours through piedmont areas are popular among tourists. The best two-wheel transport rental centers are considered to be SFR Railway Station Lugano and Balmelli Sport. 4. Tourists are strongly recommended to go shopping backed with national currency. Currency exchange is available in one of the local banks or in the private currency exchange offices. The currency exchange offices located on the territory of the … Read more

Bern
3. Swiss watches remains one of the most popular souvenirs that tourists usually prefer to purchase as souvenirs from the trip. The best way to purchase them is in specialized shops only. If you buy a watch on markets, there’s a risk that you will get a cheap fake at quite a high price. 4. Tourists are recommended to take special Global Refund Cheque receipts when they make purchases. While leaving the city, you will be able to use this receipt to receive a refund of the commission of … Read more

Map of popular regions of Switzerland