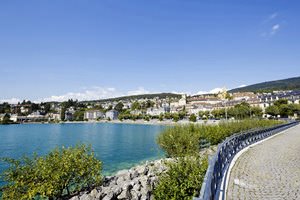 Switzerland is the birthplace of cheese and fondue. The cuisine of this country is diverse, as it has absorbed the traditions of the neighboring countries. Among the national Swiss recipes, you can find dishes from Austria, Germany, Italy, and France. However, Switzerland has a large number of authentic recipes that have made the cuisine known throughout Europe. The basis consists of dishes cooked of milk, cheese, eggs, and meat with the obligatory use of seasonings and spices. The country pays the great attention to the quality of products. Even special organizations that monitor the market and assign the highest level of quality, are created here. Still, the landmark of Switzerland in the gastronomic world is cheese.
What you need to know about Switzerland prior to visit - advices
1. Switzerland is not part of the European Union. This country has its own currency, francs. It's better to change money in banks, as they offer the …
Read further
The most famous Swiss cheeses are Emmental, Gruyere, and Appenzeller. Emmental has a piquant, slightly sweet taste. Spices are added to it during making. It is often called the Swiss cheese outside Switzerland. Gruyere has a nutty taste and is distinguished by a complete lack of holes. It is much denser and heavier. Appenzeller is one of the oldest cheeses in this country; it is made following one recipe for more than 700 years. The secret of unusual taste is that during cooking it is processed with herbs and impregnated with white wine.
Switzerland is home to one of the world's most popular dishes for the company, fondue. It is made of several types of cheese - most often, these are Gruyere and emmental - in special heat-resistant dishes called caquelon. The caquelon is heated, allowing the cheese inside it to melt. Then, herbs, spices, and garlic are added. After that, all guests, with the help of long forks for fondue or skewers, can dunk in the melted cheese slices of bread, potatoes, gherkins, chicken fillet pieces or any other products. In Swiss cuisine, there is another dish of processed cheese, raclette. It is cooked very simply. The piece of a special cheese is put close to the fire. After the cheese begins to heat, it is scraped off with a special knife or spatula. Raclette is served with boiled potatoes. Copyright www.orangesmile.com
What to see and what to visit in Switzerland with children
Switzerland provides everything for a comfortable family holiday. There are several large amusement parks, water parks, and children's museums in the …
Read further
In Switzerland, cheese soup is served with croutons. Basel became the birthplace of another traditional soup. Basel soup made from toasted flour. Its recipe is simple. It includes beef broth, flour, butter, and onions. After all, the dish is sprinkled with grated cheese. Cheese is also actively used for various vegetable casseroles. One of the traditional dishes is tartiflette, which is casserole of potatoes, bacon, and onions under delicate reblochon cream cheese with nutty taste. Another noteworthy dish of Swiss cuisine is roesti. It's a thin crispy flat cake made of potatoes. That's a classic breakfast of any Swiss. It can be served with bacon, fried egg and, of course, cheese. 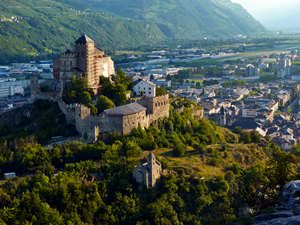 Traditions of German and French cuisines are clearly traced in Switzerland, and therefore one can find here a wide variety of sausages. Traditionally, they are served with mashed potatoes and onions. It's worth trying Bundenfliesch, which is dried beef with onions, geschnetzeltes or fried veal with mushrooms, and leberwurst, smoked sausage of liver and bacon. The main dessert is chocolate. In Switzerland, they first learned to make in tiles. Today, the country produces several hundred species of chocolate varieties. Beer is popular among beverages. Local beer is pretty stiff, up to 14 degrees. Dry wines from the local wine regions, cherry vodka or kirsch, and creamy brandy Schlumli Pflumli are also in demand.

♥   Restaurant 'AURA' Zürich. Type - Meats and grills|Grills. On the map

Cuisine and restaurants in popular cities of Switzerland

Zurich
Rösti potato is a very popular dish that is often chosen as a side dish to bacon and other meat dishes. When it comes to desserts, Swiss chocolate remains the undisputed leader here. Coffee lovers can enjoy a special sort of drink called "ristretto". Even connoisseurs of coffee call it divine. Many restaurants in Zurich serve typical Italian dishes - pizza, risotto and pasta with widest choice of spicy sauces and vegetables. Some restaurants resemble German pubs - the beer flows like water in … Read more

Zermatt
Local cheese is considered a distinctive feature of Swiss cooking. It is produced all over the country. You can find about a hundred different types of cheese in Zermatt. These are inexpensive varieties that can be found in any supermarket. There are also rare home-made cheeses here. They are only served in restaurants. Locals don't just slice cheese or sprinkle it on pizza. Fondue is extremely popular here. This is not a specific dish but a kind of cooking of certain ingredients. Fondue is a … Read more

Geneva
Leopard Room Restaurant attracts visitors not only by an exotic menu and widest choice of delicacies, but also by the amazing design of the hall. In the center of the restaurant is located a large fireplace, around which are arranged tables. The restaurant’s hall is decorated with ornamental palms. Windows restaurant is considered one of the most prestigious institutions of the city. Here guests will enjoy popular dishes of European cuisine and can order the best Swiss wines. The restaurant … Read more

Interlaken
Goldener Anker restaurant is a great family friendly place. Visitors with children will be provided with a special menu. During lunch time visitors will be offered a special menu with lunch dishes at most attractive prices. El Azteca restaurant specializes in cooking Mexican cuisine dishes. This dining facility has the full right to be called one of the most romantic dining facilities of Interlaken. In the evening the restaurant is distinguished by quiet and relaxed atmosphere. Nice music … Read more

Luzern
The Jasper restaurant is another place of gourmands’ interest which presents a unique fusion of European style and oriental culinary traditions. Literally the name of the restaurant is interpreted as “precious gem” as everything is just perfect in this gastronomic establishment including the service, the menu and the relaxation inspiring atmosphere. The connoisseurs of French cuisine should surely visit the Bam Bou Restaurant featuring the impressive selection of dishes and unique … Read more

Basel
Blindekuh restaurant is a very unusual gastronomic establishment, which can be literally translated as "A Blind Cow". There is an interesting legend connected with the history of the restaurant. It is believed that the founder of the restaurant was a blind priest who decided to provide work for all his blind friends. The meals in the restaurant were prepared by blind cooks, and blind waiters served visitors virtually "to the touch". Now the restaurant has the best chefs and waiters, but the … Read more

Locarno
The heart of the menu of the restaurant Osteria del Centenario is the dishes of Mediterranean cuisine. Seafood and vegetables are used by cooks to make real culinary masterpieces as each dish features unique chef’s touch. Among the restaurants of Swiss cuisine Da Valentino is one that deserves peculiar attention. It ranks among popular low-cost establishments of the city. The restaurant is a perfect place for a big company. The Da Valentino restaurant will also turn to a proper place for … Read more

Saas-Fee
If you want to taste the dishes that form the basis of local cuisine you should start with fondue, of course. It is believed that the dish itself appeared in the cuisine of local peasants several centuries ago. Sometimes they had to live on stale bread and cheese. Today fondue is not even a dish but a way of cooking. Most often, bread is the main ingredient. It is dipped in a special melted cheese mixed with wine and garlic. This dish is washed down with schnapps or tea. Sometimes pieces of … Read more