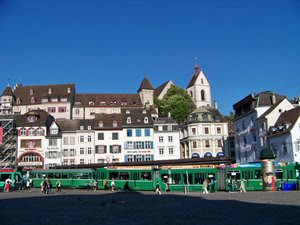 Shopping in Switzerland will be a pleasant part of the trip, but few people travel specially for that. Nevertheless, there is a huge number of shops. Geneva can be called the center of shopping. Boutiques, shopping centers and department stores are concentrated there. Tourists often bring from Switzerland different types of cheese, the famous Swiss chocolate, and Alpine bells. Local producers surprise with the unusual tastes of chocolate; the most unexpected ingredients, such as chili, can be added. You can buy chocolate in supermarkets or shopping centers, but it won’t be elite. The exclusive Swiss chocolate is sold in specialized shops; the prices for it are slightly higher.
For active traveler - national parks, landscapes and nature of Switzerland
Switzerland is one of the most picturesque countries in Europe. About 60 percent of its land is occupied by the Alps; the rest of the territory is …
Read further
Do not forget about the Swiss watch. It is impossible to stumble on a fake at local shops. The most famous watch brands are Rolex, Tissot, Cartier, Omega, and Patek Philippe can be found there. It is better to buy a watch in Zurich, there is the largest selection of models in different price segments. Luxury watches can be tried on Bahnhofstrasse; products at more democratic prices can be bought in the historic part of the city. Stores in Switzerland, even the most elite local producers, usually have a fairly modest and simple design. It's not customary to exhibit luxury and wealth. Prices for watches in all cities of the country are almost identical, so that you can buy a model you like anywhere.
Great opportunities for shopping are offered by Geneva. Shopping in the city is concentrated on the main shopping streets - rue du Marche and rue du Rive; they have boutiques of world famous brands. In the center of the city, there is the Bon Genie department store. It features boutiques of such brands as Chanel, Sonia Rykiel, Jimmy Choo, Jean Paul Gaultier, and Salvatore Ferragamo. Cheeses, chocolate and other gastronomic goods and souvenirs are better to buy in the Deli Globus. There you can find cosmetics and household goods. Goods at more democratic prices should be found in the outlet of Le Mouton A Cinc Pattes and the Cornavin shopping complex. It's worth to look for exclusive items in Lugano, where there is a pedestrian street with boutiques and shops. The longest street with shops in Europe is located in Bern. Copyright www.orangesmile.com
Best visiting periods - the climate of Switzerland
The climate of Switzerland is moderately continental. The peculiarity of the country is its landscape. More than 62 percent of the territory is …
Read further
Another center of shopping in Switzerland is the small ski resort Samnaun, which is a duty-free zone. Here you do not have to pay VAT for any goods. In addition, most stores offer an additional 15-20% discount, which makes shopping even more attractive. The largest outlet of Switzerland, Foxtown, is located in the town of Mendrisio. It features stores of more than 250 brands; discounts can reach 50-70%. Another major outlet is located near Basel. Fashion Fish has more than 50 shops with clothes and shoes by Guess, Puma, Marco Polo, and Beldona. Discounts are somewhat more modest, about 20-30%. Several small outlets are located in Zurich. The largest is Trois Pommes, it features Prada, Galliano, Lagerfeld, and Alexander McQueen. On average, they offer discounts of 20-30%. 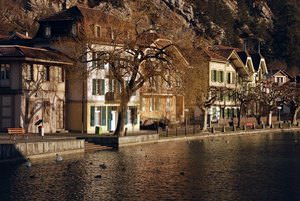 In Switzerland, as in any European country, there are sales twice a year. Winter sales begin on Christmas and last until February. This time is considered the best for shopping in Switzerland; on holidays, discounts can reach 50-70%. Shops extend their working day and open even on holidays in December. Discounts increase gradually. The most profitable purchases can be made at the end of the season, in February. There are 5 major festive markets on Christmas, where you can buy souvenirs and gifts. The summer season of sales starts in mid-July and lasts until September.

Designer outlets in Switzerland
♥   Outlet 'FoxTown Mendrisio' Via A. Maspoli 18 Mendrisio 6850 Switzerland. On the map

Coolest places in Switzerland from our Guinness book 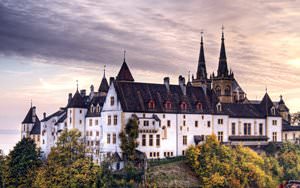 Neuchâtel, which has named the surrounding canton and the nearby picturesque lake, is one of the oldest castles in Switzerland. The castle was founded more than a thousand years ago. As early as 1011, King Rudolf III. His wife. Originally the castle had a very advantageous strategic location. The narrow rock formation between Lake Neuchâtel and the Sion river became the site of the castle. The historic building is also used today for government purposes. Some of the rooms of the ancient castle are open for visitors.

The tourists have a chance to look into the living quarters, where the interiors of the previous centuries were carefully restored. The old archives are kept in one of the small rooms. In the spacious and sumptuously decorated Rittersaal the ceremonial events were held. … Read all 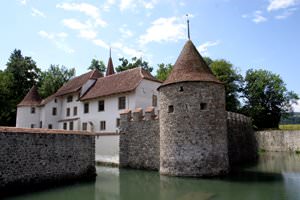 In the 12th century on the Aabach river, which flows into the Hallwilersee, the majestic castle was built. Its founder was Count Hallwyl, whose order on the river had created the great artificial island for the castle. In 1380 the building was heavily damaged by fire. For the first time the castle was reconstructed in the 15th century. Since then Hallwyl Castle has hardly changed. In the 16th century the legendary scientist Burkhard von Hallwyl lived. He opened the pharmacy in the castle and preserved a valuable collection of more than 2,5 thousand recipes.

The castle was opened in 1925 for a free visit. In most of his rooms and rooms the museum was furnished. In the halls the unique collection of the portraits of all members of the Hallwyl family is preserved. Part of the most valuable … Read all
All unique sightseeing Switzerland

Sightseeings of Switzerland in photostream

Shopping malls, boutiques and outlets in top cities of Switzerland

Adelboden-Lenk
Fans of winter sports should visit Aellig Sportgeschäft shop that is open here. It sells everything needed for skiing. Many tourists in need of quality sports clothes and shoes visit this store. Zryd Sport & Mode, which is located nearby, is a must for everyone interested in fashionable sportswear. The shop offers both men’s and women’s clothes and always has a stock of trendy and eye-catching items. Pay your attention to Swiss-made goods because they are famous for their high quality. … Read more

Zurich
There are many unusual and interesting shops on Niederdorfstrasse. This street is literally full of shops that offer clothes. Besides that, there are several historical stores that sell spices and other national delicacies. Many tourists visit this street in order to attend old coffee shops that look more like museums. The Old Town is traditionally rich in interesting shops. For example, sweet tooth travelers will fall in love with historical Confiserie Teuscher. For many years, the shop has … Read more

Zermatt
You should definitely buy local chocolate. If beautiful packaging is important to you, then choose souvenir bars and handmade candies. You can find them both in the shop opposite the train station, and in a couple of shops in the town center. If the chocolate quality is more important to you than the packaging, then you should just search for chocolate at a discount in any of the local grocery stores. You can find a variety of bars - bitter, milk, with filling or without filling. You can … Read more

Geneva
Those who spare no expense for exquisite accessories, should definitely visit the Bucherer trading house. Here, buyers are offered watches and jewelry of Piaget, Baume & Mercier, Audemars Piguet, Longines, Girard Perregaux, TAG, Rado, Heuer, Tudor and Carl F. Bucherer famous brands. All the goods presented in this store are of the highest quality, but the prices are quite high as well. In Geneva, there are many interesting souvenir shops. Longemalle store remains at the peak of popularity among … Read more

Interlaken
Not far from the gallery is located Chalet store, which is known to all lovers of chocolate in the city. Chocolate is sold in a variety of forms and types. Visitors can choose beautiful gift sets of chocolates, original figured chocolate, and classic tiles, which are sold in bulk. Absolutely all chocolate products are handmade. In this store, you can order the production of individual sweet gifts. Buhler is a very popular store with tourists. It offers things indispensable on the journey and … Read more

Luzern
Just a few steps from Lucerne Railway Station is RailCity, a tourist-oriented shopping complex. Within its walls, you can find the most popular and sought-after goods. They sell excellent Swiss watches and souvenirs, as well as branded clothes and shoes. There is also a large bookstore in the mall, and independent tourists will like a supermarket on the ground floor. A beautiful historic building houses Bucherer store specializing in Swiss watches. More than 3,000 models of this popular … Read more

Basel
In search of souvenirs, take a walk down Stadthausgasse street. It is here, that the most popular gift stores are concentrated. Many of them have been runing for decades and are combined with workshops. They sell great wood carvings, painted utensils, traditional magnets and postcards. One of Basel's most visited stores is Cafe Spitz, which sells the most popular chocolate-covered cherry with liqueur. These sweets can be found in many stores, but, according to experienced tourists, Cafe Spitz … Read more

Saas-Fee
You can start buying items at any local supermarket or just a small shop. Swiss chocolate will be sold there. Locals know how much foreigners love this product. Therefore, you will find a dozen varieties of chocolate even in the smallest grocery store here. Chocolate prices are quite affordable here. You can make the best purchase on the promotion in any of the supermarkets. The discount can reach half of the original cost there. There are many options for chocolate here – from the usual … Read more

Map of shops in Switzerland cities