Detailed hi-res maps of Salzburg for download or print 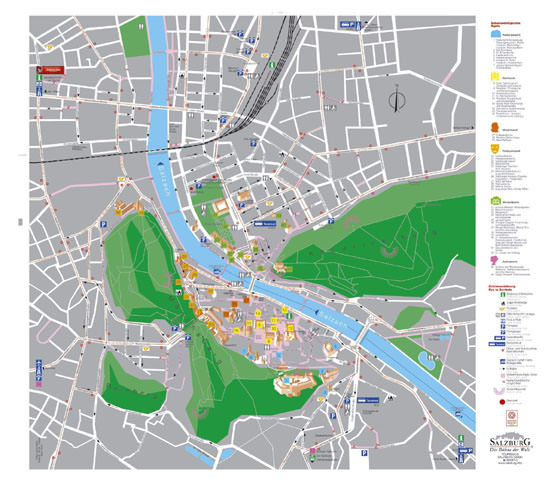 Search for services, infrastructure and sights on map of Salzburg

Our guide chapters over Salzburg

The next hotel in the review, Wyndham Grand Salzburg Conference Centre, is targeted at leisure and business travelers and has rooms for both savvy guests and fans of luxury. The latter are welcome to book the exclusive 78 square meters large suite. A day in the posh room costs nearly US$800. The spacious suite is made in a classic style and has contemporary designer furniture. There are a large work area and a table … Open

Salzburg for children - what to visit

There is also the Museum of Toys in Salzburg, and both children and experienced collectors will find it fascinating to visit it. The old museum exhibits a rich and precious collection of antique toys that were brought from different parts of the world. Children will be super excited to visit the museum because of one more reason – it’s allowed to touch many toys. One more wonderful open air museum - … Open

Motel One Salzburg-Süd greeted first guests yet in 2011. The budget hotel is distinguished by an unusual and attractive design. Stylish sky blue designer furniture, creative retro style brick walls in the hall, and interesting accessories made of metal and glass – all these elements of décor only add to the stylish and harmonious design of the hotel. Bathrooms are tiled with marble and feature classic … Open

While walking in the historic part of the city, don’t forget to visit Höllrigl bookstore. It’s the oldest book shop in the city where visitors will easily find all popular best sellers and various interesting goods for travelers. Höllrigl traditionally sells various tour guides with the list of city landmarks, beautiful postcards and calendars, and many other traditional souvenirs. The unusual … Open

Hotels with history of Salzburg

The high class Bristol Salzburg will also please travelers with its magnificent historic atmosphere. A fantastic collection of antique items is a true gem of this wonderful hotel. All guest rooms have fabulous antique furniture and unique collectable items. Ceilings with fretwork or skilled draping with premium textiles, giant crystal chandeliers and beds with hand carved headboards with gilding, portraits of … Open

6. The tourists, who will rent a bike, need to watch it carefully. Don’t leave it unattended on the streets of the city as the vehicle can be stolen. Each bike is provided with a special chain and a combination lock that will help you to protect your two-wheeled friend from thieves. 7. Local chocolate remains a popular souvenir that tourists usually bring from Salzburg. During the time of … Open