Detailed hi-res maps of Linz for download or print 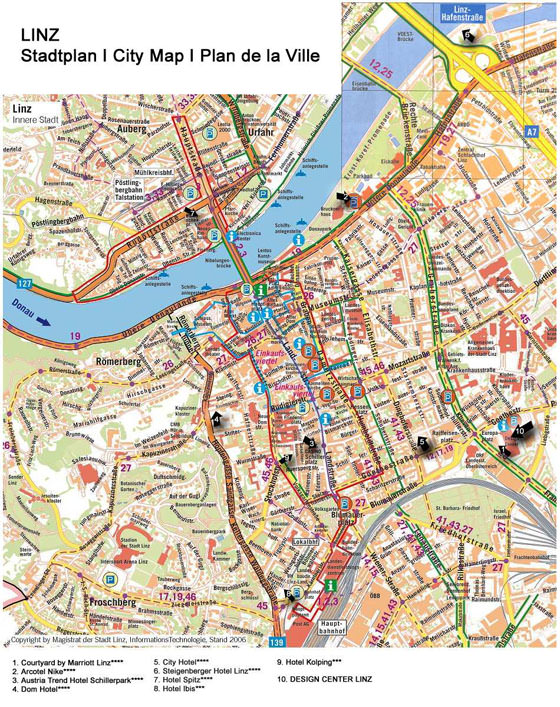 The actual dimensions of the Linz map are 950 X 1200 pixels, file size (in bytes) - 291117. You can open this downloadable and printable map of Linz by clicking on the map itself or via this link: Open the map. 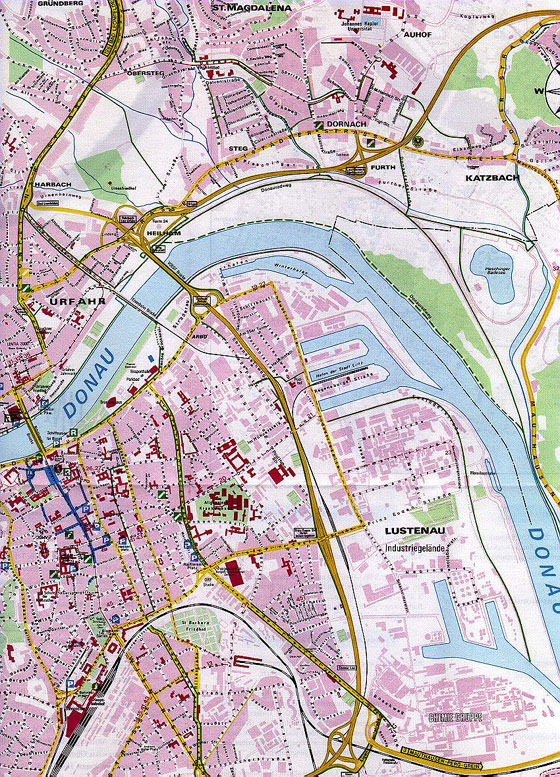 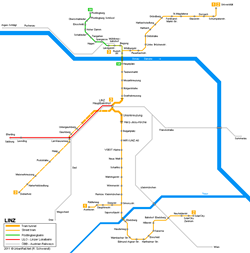 About 40% of the land of Austria is used as an agricultural land. For the most part, crops, fruits and grapes are grown. Meadows and pastures for cattle occupy about 57%. The Alpine lowlands are considered to be the most fertile. More than 91% of the total Austrian-produced food is consumed by the population. Exports of meat and dairy products isn’t that large. The country also exports wheat and corn. The number of Austrian products in the total world exports of agricultural products is 4%. The transport system of Austria is well-developed. There are more than 6 thousand km of railways in the country, as well as about 1 500 km of modern high-speed autobahns. An average of about 5 million tons of cargo are transported by Danube river annually. This is mostly coal, coke, oil, fertilizers, and metals. … Open

Search for services, infrastructure and sights on map of Linz

Our guide chapters over Linz

Gamblers will appreciate the time spent in the casino of the same name with the city where they are offered roulette tables and gaming slots, as well as a fine restaurant. It is worth noting that all visitors must be dressed appropriately. If you left your jacket in a hotel, you can rent one in the wardrobe of the institution. Many tourists visit the casino for another reason - all thanks to the pleasant atmosphere … Open

Festivals and events in Linz

Another interesting music festival that all music fans will enjoy is called 4020. It is aimed at allowing the audience to hear new names in music. Among the offered genres are a cappella, rock, pop music, ambient. The festival is held at various venues in the city in early March. Connoisseurs of theatrical art in Linz are advised to attend such an event as the Schäxpir Festival, which starts in late June and ends … Open

2. The main tourist center of the city is the Linz City Tourist Board located next to the Hauptplatz train station. The center serves its customers daily. You can take booklets describing sights and a city map, as well as learn about upcoming cultural events and book tickets in the tourist office. 3. The high tourist season is from May to October. At this time, the most favorable weather prevails. … Open

Landstraße is considered the city's main shopping street with a huge choice of stores. It is here that one should look for the most popular fashion boutiques and numerous shops selling gastronomic delicacies. Popular jewelry stores are also located on this street, and many come here in search of original souvenirs and handicrafts made by local artisans. Shops available on this street will surely appeal to fans of … Open

Linz for children - what to visit

Among the city parks suitable for walking with children, it is worth noting the Donau Park. Located on the banks of the Danube, this park is very large and beautiful. Locals come here for walks and to ride bicycles. The park is equipped with several playgrounds for children, and more than enough free space for active games. In summer, you can sunbathe and have a family picnic in the park. Nature enthusiasts … Open

In the vicinity of Linz, there is an important natural landmark – Hohe Tauern National Park. This is the largest alpine reserve, which was founded in 1981. On its territory, there is a huge glacier, and more than 400 mountain peaks, the height of some of which is more than 3,000 meters. Most tourist routes in this reserve are open in the summer. At this time of the year, you can admire crystal clear mountain lakes, … Open