Detailed hi-res maps of Kaprun for download or print 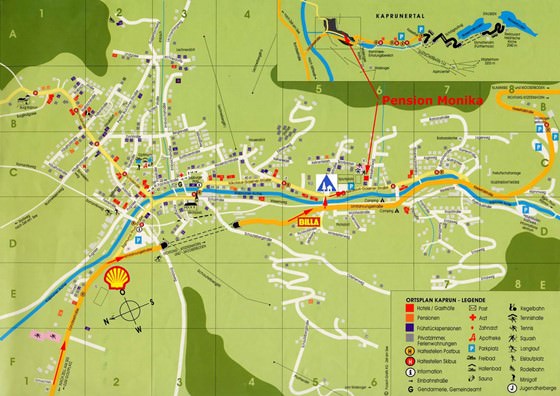 The actual dimensions of the Kaprun map are 1703 X 1205 pixels, file size (in bytes) - 292911. You can open this downloadable and printable map of Kaprun by clicking on the map itself or via this link: Open the map.
Kaprun - guide chapters 1 2 3 4

City tours, excursions and tickets in Kaprun and surroundings

Search for services, infrastructure and sights on map of Kaprun

Our guide chapters over Kaprun

Upscale Tauern Spa Zell am See-Kaprun Hotel is especially popular among fans of spa treatments. It houses an ultra-modern spa with an area of 20,000 square meters. The spa center is a large-scale leisure complex where you can have a great time with the whole family. The complex offers 13 various types of saunas, there are chic pools and a special pool with slides for children. Besides that, here you can find … Open

The highest station is Gipfelstation. A significant part of the slopes starting here and in the center of the slope ends in the so-called Alpincenter, while some of them go further. The Alpine Center is the busiest and most crowded place on the glacier slope where numerous cafes and restaurants can be found. Besides gastronomic establishments, vacationers can visit one of the three snow parks, the total area of … Open

Fans of unusual entertainment are welcome to make a refreshing ride on a tram around the lake. During such a ride, travelers will be able to admire magnificent landscapes and relax. No wonder why this entertainment is incredibly popular with travelers with children. Danielstollen is an old mine that also has become a popular tourist landmark. Vacationers are welcome to participate in interesting thematic … Open

In Hohenwarter Park you will find Kaprun Historical Museum - the place housing lots of priceless exhibits and the most visited cultural center in the city. Its exposition is devoted to the most significant events the commune has ever experienced. The age of some of the exhibits is more than 500 years. Of particular interest is a natural science exposition, as well as a collection of exhibits dedicated to the life … Open

Maps of Salzburg
However, travelers, buying summer or autumn tours to Austria, can count not only on the classics. At the beginning of summer, the Summer Scene festival takes place, which is dedicated to avant-garde art. In October, the Jazz & The City Festival gathers performers from all over the world. If you prefer more "acid" sounds of electronic music, you will be certainly satisfied with ... Open »
Maps of Innsbruck
The first interesting festival of the year takes place at the beginning of February - the Snow Festival. This is the perfect time to plan and organize the Snow Festival, which gathers thousands of local people, national and international tourists on the Market Square. If you came here with children, there are a lot of platforms where they can try themselves in different ... Open »
Maps of Munich
During spring, all the tourists and residents enjoy the Munich Spring Festival or Munchener Fruhlingsfest. The Spring Festival lasts more than two weeks - from the end of April to the beginning of May. The entrance is free, you will have to fork out only for food, beverages, and some entertainment. In June, all the fans and connoisseurs of classical music will gather in Munich ... Open »
Maps of Landshut
It is very difficult to get the opportunity to portray the Polish princess and the Grand Duke. The beginning of the festival is always preceded by a competition in which thousands of applicants for leading roles take part. Ladies grow their hair for several years to become as similar to Jadvyga as possible and do medieval hairstyles. On the festival days, plenty of ... Open »
OrangeSmile.com - online travel reservation expert providing reliable car rental and hotel booking services. We feature more than 25.000 destinations with 12.000 rental offices and 200.000 hotels worldwide.
Secure Server