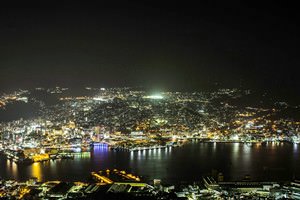 Nagasaki hosts many annual festivals, each of which has its own unique history. In August, during the traditional Obon Festival, local residents honor the memory of deceased relatives. For this event, townspeople built small boats with photographs of relatives who died in the current year fixed on them. A solemn procession passes through the city streets to the harbor where the symbolic boats are burned. At first glance, the festival may seem fully mournful, but there is also a festive part. Locals believe that the boat burning ceremony helps the souls of their deceased relatives to go to heaven. Such a significant and kind event is celebrated with colorful fireworks and gong playing.
Shopping in Nagasaki - main shopping streets, outlets and boutiques
The highest concentration of stores in Nagasaki can be found near JR Nagasaki Railway Station. Here you can visit shopping centers, numerous electronics stores, fashion boutiques, and …

Open
In late August, the Lantern Festival, one of the largest of its kind in Japan, is held in the surrounding area of Emukaetho. Within the framework of this festival, a huge 25-meter-high tower is built from lanterns. More than 3,000 lanterns are used for its formation. When evening comes, all the lanterns installed on city streets and squares are lit - a truly fantastic sight. The festival involves many entertainment activities for children, they can also participate in ceremonies.
Nagasaki is the venue for one of the largest fireworks festivals in Japan, which is usually held in the last days of July. A pyrotechnic show organized in a seaside park becomes one of the largest on Kyushu Island. The festival program lasts two days, and most of the events take place in the evening. About 10,000 fireworks are launched on the first evening and about 5,000 on the second. Apart from fireworks displays, a lot of interesting entertainments are organized as part of the festival. The city park offers open-air cafes serving popular drinks and traditional food until late at night. Here, open-air concerts and theater performances are held, carousels and rides are installed for the youngest guests. Copyright www.orangesmile.com
Guide to Nagasaki sightseeing - things to see and to visit
The city is located in a picturesque bay surrounded by mountains from all sides. For a long time Nagasaki was the only port city that enables the communication with Europe. In 1945 the city …

Open
In general, local residents are known for a great love for lush holidays and celebrations, and this feature of the national culture is often made fun of, in a good sense. Solemn processions and carnivals that take place in Nagasaki are truly second to none in Japan. One of the most beautiful and magnificent holidays is the Nagasaki County Festival celebrated on the ninth day of the ninth lunar month. The history of this holiday is very interesting and begins in the first half of the 17th century. During this period, many Portuguese missionaries who settled in Nagasaki built Catholic churches and organized lush religious holidays in the streets. In order to overshadow their processions, locals decided to arrange their own holiday. Over hundreds of years, it has gained an incredible scale. 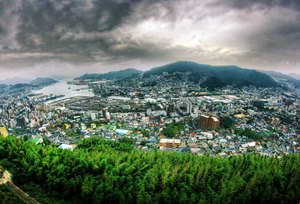 According to one of the historical traditions, it is customary to leave the doors of the houses open on the days of the festival. That's how people demonstrate their purity within historically accepted faith. Everyone can enter the house and check if any Catholic attributes are stored inside. The traditional festival has gained immense proportions. Colorful parades and processions are held in Nagasaki streets for as long as three days. Beautiful platforms and other symbolic sets are made for the festival to be put on public display. The festival audience is mainly made up of locals. In recent years, however, it attracts more and more tourists. Folklore groups and street performers are always invited to the festival, so it will be interesting to visit it even for those who have never before been interested in religious holidays.
Family holidays with kids in Nagasaki. How to entertain your child, things to show to children.
Agiruno Oka Park is very popular with young families in Nagasaki. This is not just another picturesque park but a real outdoor recreation center where you can spend an exciting day. The park …

Open
In Nagasaki, beautiful celebrations are held throughout the year. Despite the fact that now they attract lots of ordinary tourists, the traditions of many holidays remain unchanged. There are no tourist-oriented festivals and celebrations here - all holidays are based on historical traditions. Given that local religious rules are rather soft, adherents of any religion can participate in most festivals. This feature also applies to holidays taking place in local churches throughout the year. Fans of event tourism would be happy to visit Nagasaki at any time of the year, as festivals and celebrations dedicated to the regional culture are held one after another here.

This guide to traditions and festivals in Nagasaki is protected by the copyright law. You can re-publish this content with mandatory attribution: direct and active hyperlink to www.orangesmile.com.
Nagasaki - guide chapters 1 2 3 4 5 6 7 8 9

Cathedrals and basilicas near Nagasaki
♥   Basilica of the Twenty-Six Holy Martyrs of Japan (Oura Church), 長崎 (Nagasaki), 2.3 km from the center. On the map

♥   Cathedral of the Immaculate Conception (Urakami Church), 長崎 (Nagasaki), 2.4 km from the center. On the map

Unique landmarks in Nagasaki and around 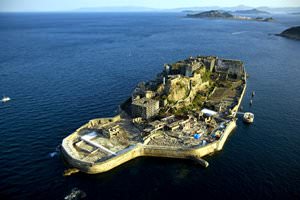 Distance from Nagasaki center - 18.6 km.
The island reached a peak population of 5259 in the middle of the 20th century. In the early 60s of the last century coal mining declined and in 1974 the last mine was closed. More than 30 high-rise apartment buildings once occupied by workers and families survived so far. … Read further

Colors of Nagasaki in photos

Traditions and festivals in cities around Nagasaki

Fukuoka
Fukuoka never ceases to attract tourists who like to rest in large modern cities. It is a thriving metropolis, one of the ten largest and most densely populated cities in the country. Surprisingly, modern and rapidly developing city has managed to preserve the cultural heritage of past centuries. Many travelers arrive to the city at the beginning of May, when the Golden Week ... Open »
Hiroshima
During the meal, don’t stick chopsticks upright in the rice, as it is considered one of the most common and serious errors. According to local rules of etiquette, you shouldn’t eat on the go; eating is accepted only in designated areas, restaurants or spacious terraces of many outdoor cafes. It is noteworthy that smoking is allowed in literally any place, except for ... Open »
Okayama
Okayama will be a great vacation destination for travelers who have long dreamed of getting closer to the traditions and culture of Japan. The national color is felt in everything, including the townspeople's love for traditional holidays, cooking, and art. All restaurants specializing in Japanese cuisine are necessarily decorated in keeping with national traditions. They have ... Open »
Kobe
Residents of Kobe are characterized by a respectful attitude to their traditions, some of which date back hundreds of years. The city has become known to many travelers thanks to its Festival of Light (Kobe Luminarie), which is now one of the most interesting events in its festive calendar. For the first time, this festival was held in 1995, and the reason for its organizing ... Open »
Osaka
Numerous cultural traditions of local people are great and impressive. Local folks respect their ancestors and follow ancient customs and age old traditions. The city of Osaka offers its guests great entertaining and cultural program including various ethnic festivals and fests. The Bon Festival is one of the most in demand ethnic fests among foreign guests. Impressive ethnic ... Open »
Seoul
You may be surprised to notice that almost all the Koreans around you are very light-skinned in Seoul, even in the height of summer. The secret is simple – a tan is considered a sign of low social status in South Korea. It is normally only for the working class. Local residents use any tool to combat sunburn. These are sunscreens, umbrellas on a hot day, and whitewash. You ... Open »

Cityguide on traditions, mentality and lifestyle of people in Nagasaki. Learn the best periods to visit Nagasaki to discover its soul - authentic festivals, events and celebrations. We will also reveal the interesting habits, attitude towards the world and to tourists in Nagasaki.