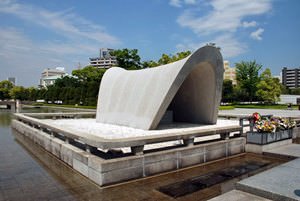 It should be noted that rules of etiquette in Hiroshima are very different from those that take place in a number of European cities. It would be useful to learn about some intricacies of the local culture and accepted rules of behavior to show respect for locals and avoid awkward situations.
Guide to Hiroshima sightseeing - things to see and to visit
Not many people know about amazing sights of Hiroshima that can leave an unforgettable mark on everyone. The unearthly beauty of Nijo Castle built in 1593 and its museum in the main …

Open
Thus, it is inadmissible to enter the house in shoes for outdoor walking, as it is considered a sign of bad manners. It may seem strange to many foreigners, but it is also unaccepted to bring soap to the bathroom; locals prefer to take a shower. In general we can say that locals are very scrupulous in matters of hygiene, they always want to look neat and keep the house in good order.
One of the most striking and recognizable national characteristics is eating food with chopsticks. Locals manage them so cleverly that you would be carried away by the sight of their movement. European cutlery is served in many local restaurants; you will certainly need to ask for it, if you are not sure that you could cope with unusual chopsticks. Copyright www.orangesmile.com
Cuisine of Hiroshima for gourmet with top restaurants and cafe
Those who are fond of Japanese cuisine and exotic oriental delicacies would enjoy their stay in Hiroshima. There are more than three hundred different restaurants and cafes in the city, so …

Open
During the meal, don’t stick chopsticks upright in the rice, as it is considered one of the most common and serious errors. According to local rules of etiquette, you shouldn’t eat on the go; eating is accepted only in designated areas, restaurants or spacious terraces of many outdoor cafes. It is noteworthy that smoking is allowed in literally any place, except for enclosed spaces and public transport. 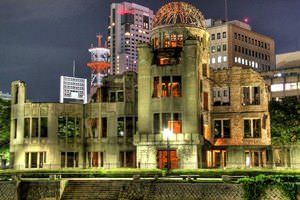 Foreign visitors may notice that locals greet each other with a bow; its depth reflects the degree of respect to the opponent. This form of greeting isn’t compulsory for foreign visitors; it would be appropriate to use a customary handshake.
Excursion over cultural sights of Hiroshima - 'must visit' points of interest
Hiroshima Peace Memorial Park is the main attraction of Hiroshima known far beyond the city. Its area is about 120 square kilometers. There are several important cultural sites at the park. …

Open
Those who are going to attend local religious sites should take into account several important rules. Despite the fact that pretty easy-going atmosphere reigns in local temples and shrines, you must be quite there. Don’t enter the temple’s territory in shoes; it should be left at the entrance or put in a bag and taken with you. You should choose an outfit carefully too; it shouldn’t be low-necked and provocative. Local rules of conduct are very simple and intuitive; often it is enough to watch locals to be in the picture.

This guide to traditions and festivals in Hiroshima is protected by the copyright law. You can re-publish this content with mandatory attribution: direct and active hyperlink to www.orangesmile.com.
Hiroshima - guide chapters 1 2 3 4 5 6

Cathedrals and basilicas near Hiroshima
♥   Cathedral of the Assumption of Mary (Noboricho Church), 広島 (Hiroshima), 1.7 km from the center. On the map

The isolated location of the Japanese nation is reflected in their National character and traditional way of life. The longevity of the Japanese, low level of violence in the country, homogeneity of the ethnic composition of the population – these are what immediately captures your attention and create a very special impression. At present, Japan is the only empire in the world that till date piously honors its traditions and at the same time achieves a tremendous success in the development of technologies and its overall economic standing. The reasons for such an amazing combination of the legacy of the past and the achievements of the future become more apparent if one knows more about the uniqueness of the Japanese National Character. … Open 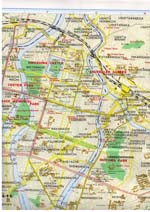 Colors of Hiroshima in photos

Traditions and festivals in cities around Hiroshima

Okayama
It is celebrated in all cities of Japan, but Okayama's festival is considered to be the biggest one. The history of the festival has more than 500 years, and Saidai-ji Temple serves as the main venue. Here they perform an unusual ritual, in which only men can take part. For this, men put on special loincloths, which become their only piece of clothing. Several hundred men ... Open »
Fukuoka
Fukuoka never ceases to attract tourists who like to rest in large modern cities. It is a thriving metropolis, one of the ten largest and most densely populated cities in the country. Surprisingly, modern and rapidly developing city has managed to preserve the cultural heritage of past centuries. Many travelers arrive to the city at the beginning of May, when the Golden Week ... Open »
Kobe
Residents of Kobe are characterized by a respectful attitude to their traditions, some of which date back hundreds of years. The city has become known to many travelers thanks to its Festival of Light (Kobe Luminarie), which is now one of the most interesting events in its festive calendar. For the first time, this festival was held in 1995, and the reason for its organizing ... Open »
Osaka
Numerous cultural traditions of local people are great and impressive. Local folks respect their ancestors and follow ancient customs and age old traditions. The city of Osaka offers its guests great entertaining and cultural program including various ethnic festivals and fests. The Bon Festival is one of the most in demand ethnic fests among foreign guests. Impressive ethnic ... Open »
Nagasaki
Nagasaki hosts many annual festivals, each of which has its own unique history. In August, during the traditional Obon Festival, local residents honor the memory of deceased relatives. For this event, townspeople built small boats with photographs of relatives who died in the current year fixed on them. A solemn procession passes through the city streets to the harbor where the ... Open »
Kyoto
In July Gion Festival traditionally takes place; it lasts for all month and includes a variety of cultural and recreational activities. Festive parades and concerts, children's performances and culinary contests, fairs and sporting events are held, as event program is kept by the hour. Interesting events are held in the old part of the city; in the evening some old family ... Open »

Cityguide on traditions, mentality and lifestyle of people in Hiroshima. Learn the best periods to visit Hiroshima to discover its soul - authentic festivals, events and celebrations. We will also reveal the interesting habits, attitude towards the world and to tourists in Hiroshima.