Sightseeing in Rabat - what to see. Complete travel guide 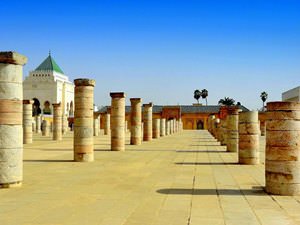 The capital of Morocco, in the past Rabat has been an important strategic point, and today it’s a popular beach resort. Visitors are traditionally amazed by rich greenery and numerous flower beds in the streets of Rabat. There are so many parks and gardens here that Rabat looks more like a huge nature reserve than a town. One can walk all day long on shady avenues and spacious parks, and look at amazing plants and beauty of flowers. The city has managed to keep several attractions that will help visitors to learn about the history of Rabat and find out many interesting details.
Extraordinary weekend in Rabat - unusual places, services and attractions for travel gourmet
…

Open
The ancient settlement Schella is a true sight of antiquity. The buildings here were built back in the 2nd century. Nowadays only a fragment of the District Wall, Abu Hassan Tomb, the mausoleum, Sala Ruins and the minaret remained from the village. All these constructions are considered real treasures of architecture. Hassan Mosque built in the 12th century is known as the main religious attraction. This is a massive and beautiful construction, which project has never been completed. The largest park of the city is called the Andalusian gardens. The park was opened in 1915. Today you can see beautiful orange groves, cypresses and plane trees, as well as many exotic flowers and trees in this park. The terraces of the garden are decorated with fountains and statues. Walk to the remote part of the garden and you will reach Museum of Moroccan Arts.
Speaking of entertainments of Rabat, we simply cannot fail to mention the city's main markets and shopping squares. This is a real paradise for shoppers as you will never find such wide choice of handicrafts, souvenirs, carpets, jewelry and dishes in any other city of Morocco. Female travellers will fall in love with cosmetics and perfumes, which are produced from natural essential oils. Tea lovers will also find much interesting here as tea is considered the national drink of Morocco. Copyright www.orangesmile.com
Extraordinary weekend in Rabat - unusual places, services and attractions for travel gourmet
…

Open
A visit to the Archaeological Museum should be included in an excursion program. Nowadays, it contains unique exhibits found in the most diverse archaeological areas of Morocco. This museum was formed in the 30s of the last century. Its collection has increased hundreds of times since its establishment. The collection of antiquities, whose age is more than 8000 years, is of particular value. Antique bronze sculptures are museum's special pride. 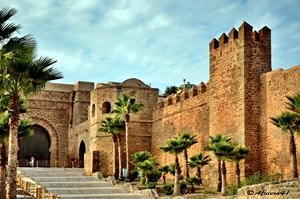 St. Peter's Cathedral is the special attraction of Rabat. It was built in 1921 and is located in the very heart of the city. The Orthodox church was created as the residence of the archbishop. It represents a vivid example of the Art Deco style. The snow-white walls of the temple and its tall carved pinnacles surrounded by traditional Moroccan buildings look very unusual.
Extraordinary weekend in Rabat - unusual places, services and attractions for travel gourmet
…

Open
In the magnificent ancient palace, built in the 17th century, is located Udai Museum. Once this majestic palace belonged to the Sultans of the Alauit dynasty. Now, it houses a collection of unique historical exhibits. The main value of the museum is the collection of Koran publications, including very old ones. The palace is decorated with exquisite handmade carpets. In some rooms it was possible to completely recreate the traditional Moroccan interior, typical for the 17th century. After exploring the palace, visitors are welcomed to take a stroll around the picturesque garden with an incredible design. 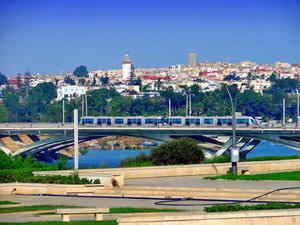 Fort Rottenburg is a great historical monument, as well. It was built in 1860 to protect the port area. The defensive structure was based on the draft of the famous engineer Rottenburg from Germany, whose name the fort has been carrying since its foundation. At the time of completion, the fort had the first-class equipment. Nevertheless, during the years of its existence, it never participated in any battle. Despite the fact, that the fort has long lost its original significance, its building wasn't destroyed. Nowadays, its whole territory is open for excursions.
Extraordinary weekend in Rabat - unusual places, services and attractions for travel gourmet
…

Open
There's another significant landmark on the coast - an old lighthouse, built in 1920. It is still used for its intended purpose. The height of the lighthouse is 24 meters. The maximum visibility of its signals is 16 nautical miles.

This guide to iconic landmarks and sights of Rabat is protected by the copyright law. You can re-publish this content with mandatory attribution: direct and active hyperlink to www.orangesmile.com.

City tours, excursions and tickets in Rabat and surroundings

Sights around Rabat from our guide 'Extreme places on Earth' 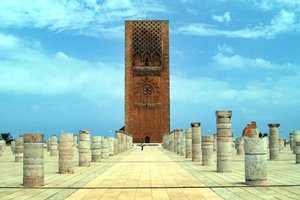 Distance from Rabat center - 1 km.
More than 250 columns and a lot of rubble are all that remains of the ancient mosque building today. Despite its incomplete construction, the Hassan Tower is considered one of the most beautiful minarets in the world today. It was built of rare pink sandstone. Decorative bas-reliefs adorn the tower. It is located in the heart of the historic district. Rabat's outstanding landmarks surround the tower. Many experienced tourists note that it is most interesting to admire the minaret at sunset. The rays of the setting sun make all its architectural features clearer at this time. … Read further 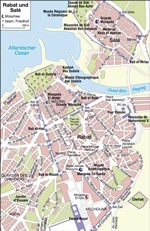 Search touristic sites on the map of Rabat

Sightseeing in regions nearby Rabat

Casablanca
Corniche embankment is the center of attraction for tourists. While taking a walk along the sea line, you can visit on of the local restaurants and bars. Nightlife lovers will enjoy numerous nightclubs and discos that work till dawn in Casablanca. This description would be incomplete without mentioning markets of this city. The majority of them are located in Habbus quarter. ... Open »
Fez
Active rest fans are welcome to participate in numerous excursions that take place here every day. Tourists are often offered to attend the foothills of the Atlas Mountains. These are the most beautiful and scenic regions of the country. Here are located numerous parks and nature reserves that cannot be entered without a guide. Just like any other Moroccan city Fez is famous ... Open »
Fes
The leathercraft quarter is equally popular among fans of excursions and shopping. Excellent clothes, shoes, and bags made of genuine leather can be bought here at very attractive prices. And if you cannot find a suitable accessory in the shops, experienced craftsmen will gladly make it to order. Connoisseurs of a culture of the past and fascinating tours, active tourists and ... Open »
Tanger
Among the architectural sights we should definitely mention Palace of Dar el Makhzen, which was built in the 17th century by the order of the Mules Ismail. For many years it was the main residence of the rulers. Starting from the 19th century it lost its status and was kept abandoned. Today, there are two museums in the palace – the palace of ancient history and Moroccan ... Open »
Gibraltar
Gibraltar is one of the most densely populated cities of the world. There is too little land here and so new buildings are created already on water. For example, landing strip of Gibraltar International Airport is created on a manmade embankment. Another peculiarity about this city is a huge number of wild monkeys. The monkeys are protected by law as Macaca Sylvanus are ... Open »
Cadiz
Tourists, who cannot imagine their rest without exotic dishes and noisy entertainments, will find all they want in the port region of Cadiz. Multiple fish restaurants, taverns and bars are located there. Many of them work until night and during summer months numerous discos and music performances are organized under the open sky. Not far away from the city center is located ... Open »

All about Rabat, Morocco - sightseeings, attractions, touristic spots, architecture, history, culture and cuisine. Prepare your trip together with OrangeSmile.com - find out the 'must see' things in Rabat, which places to visit, which excursions to take, where the breathtaking views are waiting for you. Planning your trip with this travel guide will help your to get the most out of Rabat in few days.