Sightseeing in Tanger - what to see. Complete travel guide 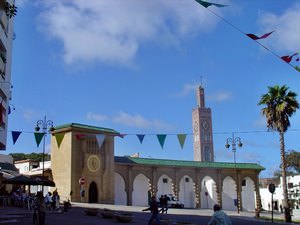 It’s an ancient Moroccan city that attracts travelers with numerous historical monuments, picturesque beaches and unique natural landscapes. High level of service allows resting here with full comfort; you will also find here well-equipped sports centers, conference rooms for negotiations and meetings, and even beauty salons and spas. One could also endlessly talk about sports and beach rest here.
Just like any Moroccan city, Tangier is famous for its beautiful bazaars. The most popular and largest one is located in the central part of the city. It is called "Grand Socco". In addition to the luxury choice of products this market is a great place to see wonderful performances of street artists. It’s really hard to find another place where snake charmers, dancers, magicians and fakirs demonstrate their amazing performance to visitors. In this market you can also buy traditional souvenirs, most popular gold jewelry, silver utensils, as well as rugs and blankets made of wool.
Among the architectural sights we should definitely mention Palace of Dar el Makhzen, which was built in the 17th century by the order of the Mules Ismail. For many years it was the main residence of the rulers. Starting from the 19th century it lost its status and was kept abandoned. Today, there are two museums in the palace – the palace of ancient history and Moroccan art. The palace’s inner courtyard is decorated with statues and fountains. This is a perfect place for walking. Copyright www.orangesmile.com
Another cultural institution worth noting is Museum of American Diplomatic Mission. The relations between the U.S. and Morocco have played a significant role in the history of the country, so the museum exhibits numerous important documents, letters and contracts that have been signed during the negotiations. In this museum you can also see a collection of antique mirrors. 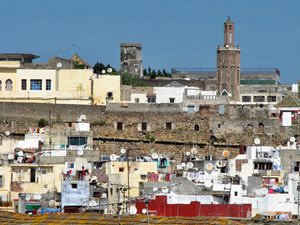 Kasbah fortress is one of the main historical symbols of Tangier. It had been constructed by the Portuguese colonizers in the late 18th century. According to the recent research, the very first fortifications were erected in its place in Roman times. The existing fortress has been built on their ruins. Almost all the territory of the fortress is now open to the public. There are a few excellent viewing platforms with a great view of the coast.
An interesting collection of historical artifacts presents the Museum of Ancient History and Antiques. Dar El-Makzen palace became its location. The beautiful palace used to belong to Sultan once. Today, its spacious rooms with luxurious design are used to store unique archaeological finds, jewelry, pottery, elegant carpets, and weapons. Of particular value are ancient Roman mosaics and decoration of some of the halls. 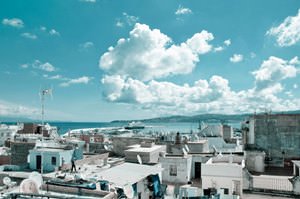 A picturesque Asilah beach is exclusive not only as a natural object but as a historical region, as well. At the end of the 15th century, the Portuguese landed on this site of the coast. Fragments of the fortress walls and bastions built by them are remnants of those times. Every year, cultural events and exciting festivals are held on the coast. They organize dance shows and open-air concerts in high tourist season.
Those who like pedestrian walks will find it interesting to visit Scarf Hill. Absolutely everyone can rise to its top and see an ancient, currently non-functioning mosque. An incredibly beautiful panorama of the city opens from the top of the hill. This is a stamping ground of curious tourists and photographers. 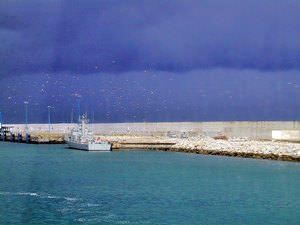 Mendubia garden is one more picturesque place. This is a real green oasis with branchy trees, flowers, and exotic plants wherever you go. The most interesting object in the garden is a dragon tree of an incredible size. According to the stories of local residents, its age is more than 800 years.
This guide to iconic landmarks and sights of Tanger is protected by the copyright law. You can re-publish this content with mandatory attribution: direct and active hyperlink to www.orangesmile.com.

City tours, excursions and tickets in Tanger and surroundings

Survived castles around Tanger
♥   Castle 'Castle of Tarifa' Cádiz, 31.5 km from the center. On the map

♥   Castle 'Castle of Castellar de la Frontera' Cádiz, 67.7 km from the center. On the map

National and city parks around Tanger
♥   Natural Park 'Estrecho' , 32.8 km from the center. On the map

Art galleries in Tanger and around
♥   Art museum 'Dar el Makhzen (Tangier)' Tangier, 0.4 km from the center. On the map

Sights around Tanger from our guide 'Extreme places on Earth' 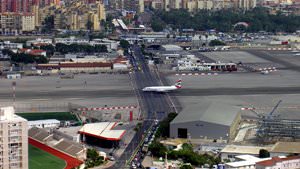 Distance from Tanger center - 58.3 km.
In May 2002 the accident happened with the aircraft Monarch Boeing 757-200 from Luton. Because of the wrong maneuver of the first pilots, the aircraft has bent forward strongly. Miraculously, thanks to the coordinated cooperation of the pilots, it has succeeded in avoiding the aircraft crash. Since 2008, Gibraltar Airport has served more than 300 thousands of passengers a year whose health and lives depend entirely on the faultless work of the pilots and the airport. … Read further

Search touristic sites on the map of Tanger

Sightseeing in regions nearby Tanger

Gibraltar
Gibraltar is one of the most densely populated cities of the world. There is too little land here and so new buildings are created already on water. For example, landing strip of Gibraltar International Airport is created on a manmade embankment. Another peculiarity about this city is a huge number of wild monkeys. The monkeys are protected by law as Macaca Sylvanus are ... Open »
Cadiz
Tourists, who cannot imagine their rest without exotic dishes and noisy entertainments, will find all they want in the port region of Cadiz. Multiple fish restaurants, taverns and bars are located there. Many of them work until night and during summer months numerous discos and music performances are organized under the open sky. Not far away from the city center is located ... Open »
Marbella
The main historical and cultural center of the city is Plaza de Los Naranjos, which is also known as the location of amazing architectural monuments. Among them are the building of the City Council with the municipal museum built in 1568, which contains items discovered during archaeological excavations, the royal house of the governor with a gallery and a magnificent carved ... Open »
Ronda
Tourists cannot fly directly to Ronda. They need to choose a flight to a large Spanish city first, for example, to Malaga. The journey time is up to five hours when traveling from Europe. There is a daily bus that connects Malaga and Ronda. This ride lasts approximately two hours. It is also possible to fly to Seville and then get on a bus to Ronda. Travelers can always call ... Open »
Benalmádena
Benalmadena is a unique resort town with rich history, multifaceted culture, and one-of-a-kind beaches. Amazing location on the Spain’s Costa del Sol is one of the reasons for such popularity, so there’s no wonder why the majority of guests are fans of beach rest. For more than forty years, Tívoli World amusement park has been one of the main symbols of the city. It’s ... Open »
Malaga
Plaza de la Merced Square is one of the most famous and widely visited places of Malaga. The square has become popular because of the great world-genius painter Pablo Picasso – his home is located there. One more attraction of this place is a monument dedicated to General Torrijos. In 2003 the Picasso Museum was formally established in the palace of Buenavista graphs by ... Open »

All about Tanger, Morocco - sightseeings, attractions, touristic spots, architecture, history, culture and cuisine. Prepare your trip together with OrangeSmile.com - find out the 'must see' things in Tanger, which places to visit, which excursions to take, where the breathtaking views are waiting for you. Planning your trip with this travel guide will help your to get the most out of Tanger in few days.