Sightseeing in Ouarzazate - what to see. Complete travel guide 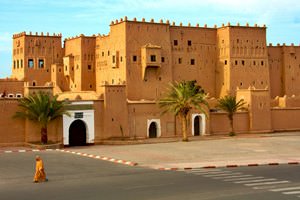 Not far from the Atlas Mountains, in the valley of the Draa River, lies a miraculous Moroccan city called Ouarzazate. This historic region has always attracted a large number of tourists from different parts of the world. Known as the Door to the desert, Ouarzazate is rich in archaeological landmarks and has a special atmosphere. Recently, the area near Ouarzazate has become the center of filmmaking in Morocco. Every year, the number of films that were made here is only growing. Unforgettable, scenic views and ruins of ancient settlements inspire many film directors. The land, which once was forgotten and nearly abandoned, has started a new life as a flourishing center of tourism and culture.
Initially, Ouarzazate was a small crossing point for merchants from Africa who were heading to Europe. The settlement significantly grew in size during the colonial period. The first town on the site of the small settlement appeared only in 1928. French colonizers were the founders of Ouarzazate. The new rulers established a military base here, turning Ouarzazate into a garrison town. During the French rule, a military airport was built in the town. European aircraft used it to replenish their fuel before a flight over the Sahara Desert.
When the French reign ended, Ouarzazate lost its importance as a military base. The city started slowly turning into a center of agriculture and started establishing business relations with other cities in Morocco as well as other countries in Asia and Europe. However, these attempts were very profitable. Fortunately, the development of tourism was beneficial for the Moroccan city. Many people around the world found out about Ouarzazate, turning it into an up-and-coming destination. This popularity also attracted many famous filmmakers, who couldn’t fail to notice the scenic beauty of the city and its suburbs. The first film studio opened in Ouarzazate in 1983. Copyright www.orangesmile.com
Many tourists in Ouarzazate choose to make a short vacation to Marrakesh and explore the attractions of that city. El Glaoui Palace is one of the places that are worth visiting. This is a relatively new palace that was finished at the beginning of the 20th century. The building is a fine example of the Arabian – Andalusian style that is typical for this region. Behind the high walls, visitors will find lush gardens that never cease to amaze guests with their beauty. Tiled shadowy parkways are perfect for a stroll. Each separate element of the path is made of marble. Moroccan motifs are predominant in the design of the palace. Naturally, every connoisseur of architecture will easily notice European style elements in the décor of the gorgeous building. 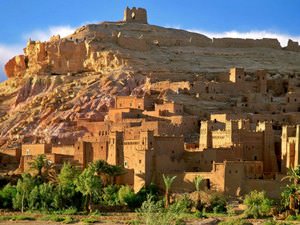 Pasha Thami El Glaoui himself, the last oligarch of Marrakesh, was engaged in the building of the Moroccan attraction. For many local people, the pasha was a wise ruler who did much to develop the city. That being said, some people considered him a merciless tyrant. The palace is built in honor of the famous ruler. During a visit to El Glaoui Palace, it is easy to notice that it is conventionally divided into two parts. The city library with a collection containing thousands of different books occupies one part of the palace. The other part of the building is more comfortable and luxurious. It currently hosts official meetings and the most important events.
Would you like to visit an unusual Moroccan fortress? In Ouarzazate, tourists can see Ait Benhaddou, a construction, the likes of which are not present anywhere else in the world. This fortress complex contains many small villages made of clay. Each of these villages is a small fortress with a rigged tower. These buildings form a large fortress. As all buildings in Ait Benhaddou have different height, the complex looks unusual and unique. The fortress looks particularly attractive in the morning, when the sun rises, and at the sunset. The whole area and the fortress get an unusual color in the red to orange sun rays. It feels like they are covered with a layer of ochre. 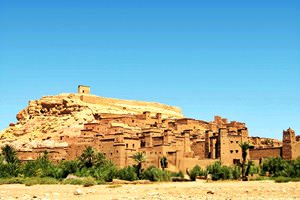 How about turning into the main character in a famous film? In Ouarzazate, tourists can visit the Cinema Museum, an educative establishment full of entertainment or the whole family. In the museum, visitors can learn more about the origins of filmmaking and its prospects. Continue your tour in Ouarzazate with a visit to Atlas Film Studio. This studio has an area of one hundred and fifty hectares where it exhibits various movie sets. Many of the items used in the filmmaking are very old. It is not hard to notice how worn out they are but it is still very easy to recognize the film where these decorations were used in.
Buses from Marrakesh are the most comfortable means of transport to reach Ouarzazate, just like other Moroccan cities. The journey time is roughly four to five hours. There are also taxi cars called Grand Taxi, and they take passengers to the Moroccan city. These taxis are significantly faster but they do not have a fixed schedule. The vehicles depart as soon as they are full. A bus coming from Agadir to Ouarzazate is another popular choice. The journey time is six hours in this case.
This guide to iconic landmarks and sights of Ouarzazate is protected by the copyright law. You can re-publish this content with mandatory attribution: direct and active hyperlink to www.orangesmile.com.

City tours, excursions and tickets in Ouarzazate and surroundings

Sightseeing in Morocco: things to see

The suburbs of the city are also a very interesting place from a historic point of view as they are the location of the ancient settlement of Anfa. Visitors will see here ruins of houses, ancient temples and squares. Archaeological excavations never stop on the territory of the settlement. The city of Fez is also rich in places of interest. This is the former capital of Morocco and the main cultural center of the country. There are several old protective facilities in the city and other important landmarks, such as Dar Batha Palace, Al Quaraouiyine Mosque, Andalusian Mosque and the tomb of Idris II. … Open

Search touristic sites on the map of Ouarzazate

Sightseeing in regions nearby Ouarzazate

Marrakech
This town is very popular among tourists, however the residents of Morocco never miss an opportunity to visit this charming place that has such a great atmosphere and location. Among the main attractions of the city we should definitely mention the center of Marrakech - Medina, in which is located the mausoleum of the founder of the city; the palace of Bahia and the Castle ... Open »
Agadir
Most probably, this is the most “European” of all Moroccan cities. Here women don’t wear hijab and many local people prefer European style in clothes. The city will amaze you by its beautiful and clean streets, spacious walleyes and accurate parks. The city has much space for walking and you will see cozy cafes and restaurants, and numerous shops simply everywhere. ... Open »
Casablanca
The old part of the city is called Medina and here you can walk on typical eastern streets and watch all most important sights of this place. The most unusual building of this region is Mahakma du Pacha. Nowadays this building is used to hold the prefecture of one of the city’s regions. Tourists are allowed to watch the inner decoration of the building, so they can make an ... Open »
Rabat
The ancient settlement Schella is a true sight of antiquity. The buildings here were built back in the 2nd century. Nowadays only a fragment of the District Wall, Abu Hassan Tomb, the mausoleum, Sala Ruins and the minaret remained from the village. All these constructions are considered real treasures of architecture. Hassan Mosque built in the 12th century is known as the ... Open »
Fez
Among the religious sites of the city the most interesting ones are University of Al-Karaouine, Grand Mosque and Mausoleum of Sultan Moulay Idriss II. They contain valuable historical artifacts, and the decoration of the halls remains untouched for already several centuries. Royal Palace is one of the most remarkable architectural structures of the city. Nowadays the palace ... Open »
Fes
The city of Fez was founded in 791, today it is the fourth largest city in the country, one of the so-called imperial cities of Morocco and is the largest center of Islamic culture in North Africa. The heyday of the city falls on the 13th century when the present-day Fes el-Bali was a collection of small areas, each of which had a separate mosque. Subsequently, all the ... Open »

All about Ouarzazate, Morocco - sightseeings, attractions, touristic spots, architecture, history, culture and cuisine. Prepare your trip together with OrangeSmile.com - find out the 'must see' things in Ouarzazate, which places to visit, which excursions to take, where the breathtaking views are waiting for you. Planning your trip with this travel guide will help your to get the most out of Ouarzazate in few days.