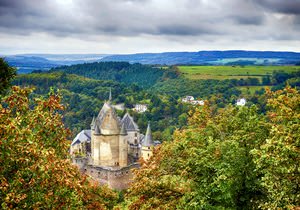 Luxembourg is very small but economically developed country. It has an excellent transport system. The railway network connects the country with neighboring France, Belgium, and Germany. There are several routes of regional trains to the border stations of these countries. The total length of railway network is 274 kilometers. You will also find regional buses running from all the different localities to the railway stations. The entire railway system is represented by modern, comfortable trains. However, despite the popularity of the railway, the most popular mode of transportation in the country is buses. In the Capital, there are about 25 bus routes, whose network looks like a star on the map. Most of the routes pass through the railway station and the central bus station Hamilius. Buses also connect the city with the airport, and even at night, it is possible to move along some routes.
Luxemburg sightseeing - top places to visit
The Grand Duchy is rich in places of interest. In Luxemburg, tourists will find ancient palaces, museums and unique nature parks, so an excursion …
Read further
The air transport network is also developed in the country. Luxembourg Findel Airport is located 5 kilometers east of the Capital. It is the main air harbor of the country. The airport makes more than 800 flights a week and connects Luxembourg with many European cities. In addition to buses, you can reach the airport by taxi, as well as by your car, which you can leave on any one of the four levels of underground parking. Also, taxis run all over the country. You can request for a taxi by calling the dispatcher, or by using special parking for taxis. The network of automobile roads with high-grade coverage is about thirty thousand kilometers. This includes even the most remote corners of Luxembourg. The cars used in Luxembourg are right hand driven, and the speed limit is 60 km/h in residential areas, 90 km/h outside them, and 120 km/h on the motorways. In Luxembourg, there is no direct access to the sea, but along the Moselle River there is a water connection with neighboring countries and the North Sea. Tourists also travel on the Sauer River for sightseeing.

Air transportation in Luxembourg is very developed, despite the small size of the State itself. The main airport of the c country is Luxembourg Findel. It is located just six kilometers from the city. The most standout feature of the airport is the solid surface of its runway. Luxembourg Findel is quite a large airport. It has two terminals. Basically, it employs two major airlines Luxair, and Cargolux. The infrastructure of the airport terminals will also pleasantly surprise even experienced travelers. On the first floor there is a comfortable lounge, while flight registration takes place on the ground floor. The control of luggage is also carried out here. Copyright www.orangesmile.com
Things to do in Luxemburg - active leisure
Luxembourg is a very quiet and peaceful country. The city of Luxembourg has more than once, headed the rating of the safest cities in the world. …
Read further
On the third floor you will find excellent restaurants that open up a breathtaking panorama to the local surroundings. All establishments within the territory of the terminal are open every day except on weekends. Luxembourg Findel is famous for its excellent service. It has a medical center, a fast food cafe (for cheaper snacks), waiting rooms with comfortable conditions, free internet, ATMs, which is very convenient for tourists, and a bank. Also, the territory of the airport has two rooms for business negotiations; one is designed for 12 people, and the other is for up to 20 people. For individuals with young children, there are separately equipped rooms where children can pass a few short hours in a fun and exciting way. Near the airport there are several good hotels, which make it possible to relax after a difficult or long flight immediately upon arrival in Luxembourg. 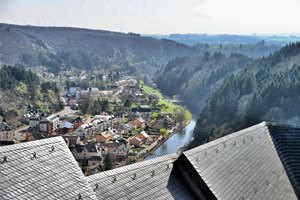 There are also areas for lovers of shopping. Here, everyone will find high-quality brand cosmetics, perfumes, various alcoholic beverages, food, and colorful souvenirs. Landside and Airside zone stores are open daily. Most tourists arriving at Luxembourg airport book a taxi or a transfer to get to the city center. However, there is also a cheaper way – public transport. Buses run every hour. Also, you can rent a car for self-drive right at the airport. 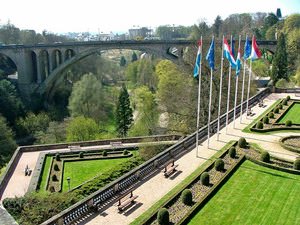 The transport system of Luxembourg will pleasantly surprise every tourist. Buses are the most popular means of public transportation in the country. They run both within a particular city, and on intercity, and regional routes. It should be noted that buses leave daily from the capital of Luxembourg to her border stations with Belgium, Germany, and France. In any case, the bus fare is the same. If you buy a ticket for an hour’s trip, you will have to pay 1 or 2 euros for it. If on the other hand you plan to travel frequently by bus, it is better to buy a so-called ticket block which costs a little over 9 euros. Also available are daily tickets, and five-day tickets which cost a little over 18 euros. Please note that in the country, tourists can purchase a special ticket which allows them not only to travel by any type of transport, but also to visit museums, and other attractions. The cost of such a ticket is 9 euros per day.
Shopping in Luxemburg - best shopping places, what to buy?
Luxembourg is one of the richest countries in the world. Despite its tiny size, this country offers its guests quite ample opportunities for shopping. …
Read further
Trains are equally popular in the country. The railways in Luxembourg are of quite good quality. However, they connect only the major cities. On the railway line run comfortable modern trains, in which the safest conditions for travel of citizens and tourists are created. Tariffication of trips is quite clear. A daily ticket costs around 4 euros, whereas a ticket that allows you to use the railway services for a month will cost 40 euros. It is worth noting that all railway tickets not only permits you to use the train, but also to take rides on buses. Please note that trains always run in strict accordance with the schedule. 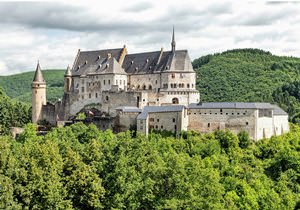 If you want to independently conduct your travel around the country, you can rent a car. This service can be accessed right at the airport or in any major city. The minimum cost of renting a car is usually between 50-60 euros per day. In order to rent a car you must be over 21 years of age. In some cases, car rental companies may require a certain amount as deposit. International driver’s license, insurance, and passport are also required. The speed limit for driving in Luxembourg are as follows; movement within cities and towns is possible at speeds of up to 50 km/h, on open roads you can accelerate to 90 km/h, and on highways you can reach speeds of up to 130 km/h. Please note that the country has very strict laws. Therefore, safety belts must always be fastened both by passengers in the front, and back seats. Also, any driver whose blood when tested is found to contain more than half a milligram of alcohol per milliliter of blood, will be subjected to the full punishment of the law.
For active traveler - national parks, landscapes and nature of Luxemburg
The magnificent landscape and incredibly beautiful nature makes Luxembourg attractive for tourists from all over the world. The country has a mild …
Read further
If you decide to rent a car in Luxembourg, do bear in mind that on weekends and on holidays, there are difficulties with securing a parking space in major cities. If you want to avoid such trouble and save money, it will be possible to rent a bicycle, although at the moment there are not many bicycle paths in the country. Taxis which are another means of getting around are also very popular in Luxembourg. You can call for a taxi via the phone, or just stop one on the street. There are also special parks designated for taxis near hotels, and railway stations. Charges are calculated approximately: landing fees cost at least 1 euro, and subsequently the cost is 70 cents per kilometer. Prices are however slightly higher on weekends and holidays.

This article about transportation in Luxemburg is protected by the copyright law. You can re-use the content, but only under the condition of placement of an active link to www.orangesmile.com.
Luxemburg guide chapters 1 2 3 4 5 6 7 8 9 10 11 12 13 14 15 16

Luxembourg
3. Fishing license can be issued by not only District Commissioner, but also by the municipal administration. Its final cost will depend on the location chosen and methods of fishing. 4. When visiting local restaurants and bars, you should leave tips that estimate 10% of the total bill. In taxi you can also leave a reward to the driver, rounding the due sum to a bigger digit. 5. Voltage in Luxembourg is 220 V, so before you leave your home, check appliances for compatibility. 6. There … Read more