Nature of Luxemburg - national parks and reserves for active recreation 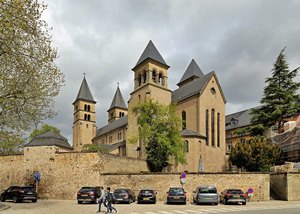 The magnificent landscape and incredibly beautiful nature makes Luxembourg attractive for tourists from all over the world. The country has a mild climate and balneological resorts with mineral springs. Springs and thermal waters make the resorts of Luxembourg especially attractive for those who are looking for an opportunity to relax in the bosom of nature and improve their health. The country's relief is predominantly a hilly, elevated plain. In the northern part of the province of Luxembourg is situated the Ardennes mountain and the famous Ardennes forest. The only national park of the country is Upper-Sure, located around the reservoir of the same name.
Luxemburg sightseeing - top places to visit
The Grand Duchy is rich in places of interest. In Luxemburg, tourists will find ancient palaces, museums and unique nature parks, so an excursion …
Read further
Upper-Sure National Park was founded in 1999 in order to preserve the unique natural resources of the country. It has rare species of animals and unique birds on its trees. Another purpose of the park’s erection was the preservation of many historic buildings, such as chapels, mills and castle ruins. They remained abandoned and belong to the state, so it was more appropriate to allocate a whole piece of land for reconstruction and restoration work. Today many travelers, going on foot tours in the national park, can enjoy spectacular views of these historic buildings. Visitors to the park can only travel on specially marked trails for tourists.
Another attraction of the Upper-Sure Park is the reservoir of the same name, artificially created in the 60s of the 20th century. It is in the north-west and is the largest reserve with water in the country and the largest storage reservoir. The reservoir was formed due to the construction of a hydroelectric power station on the Sauer River. Today this place is incredibly popular among water lovers, actively engaged in kayaking, canoeing, training in rowing and swimming in the summer. Tourists often come here to swim and sunbathe. The lake is attractive for tourists also because its water has an incredibly high quality. Copyright www.orangesmile.com
National cuisine of Luxemburg - specialties, recipes and restaurants
Luxembourg is a dwarfish state in the heart of Europe, bordering Germany, France and Belgium. The cuisine of these countries had a decisive influence …
Read further
Another popular place among tourists is Mondorf-les-Bains: a balneological resort, opened in the 19th century. Water in local thermal springs is heated to 25 degrees. It is rich in minerals and trace elements, which has a positive effect on health. Near the resort there is a spacious park, occupying about 50 hectares of forest. In it, the guests of the resort can enjoy the beauty of nature and relax after the healing and sanitary procedures. When visiting Luxembourg, you should definitely look into the Luxembourg part of the Moselle valley, where there are numerous grape houses. In this picturesque place, several hiking trails are laid, strolling along which you can get to know the beauty of the area. 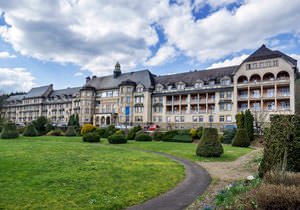 An incredibly picturesque corner of untouched nature is on the border of Luxembourg with Switzerland. The place is called "Luxembourg Switzerland" due to the landscape which is very similar to the famous Swiss ones. The highest point of this area is about 400 meters above sea level. The region has a rocky terrain, in the territory of which dense forests grow and scenic streams flow. On the territory of Luxembourg Switzerland is the oldest city in the country Echternach, founded in the 7th century. The highest points of the country are the summit in the Ardennes Kneif and Burgplatz. The difference in altitude between these points is only 1 meter (the height of Kneif is 560 meters above sea level, and Burgplatz - 559).
National traditions and mentality of people in Luxemburg
Luxembourg is a very calm country. Locals do not like excessive noise and lead a calm, measured life. It may seem that they are emotionally stingy and …
Read further
The largest park in Luxembourg is the De Ville Park, created on the site of the ruined fortress in the 19th century. The park is located in the heart of the city of Luxembourg. It is decorated with spectacular classic fountains and sculptures made in a unified style. In the De Ville Park, one can walk on foot, or go on an exciting trip on special routes on a bike rented there. Another place for an interesting walk is the sculpture park of Michel Rodange. The park is in the town of Wiltz. Originally it contained a monument of Michel Rodange himself, a famous poet and writer. Over time, other sculptures began to appear in it.

This article about nature and national parks of Luxemburg is protected by the copyright law. You can re-use the content, but only under the condition of placement of an active link to www.orangesmile.com.
Luxemburg guide chapters 1 2 3 4 5 6 7 8 9 10 11 12 13 14 15 16

Cultural sights in regions of Luxemburg

Luxembourg
The library of Jesuits is one more important historical. Until the end of the 18th century the library was the only educational institution in the city. It is worth noting that even nowadays the city doesn’t have its own educational institutions, only several branches of German and French universities. The ancient fish market is not only a place for all kinds of fairs and festivals. This is a real tourist attraction. On the territory of the market you will see an ancient well. Many … Read more

Dudelange
Blast Furnace Belval, which is located in the nearby commune of Esch-sur-Alzette, something unique to its guests. It is a museum where modern art meets industrial style. The result is very interesting and worth checking. Blast Furnace Belval tells the history of the country through its steel industry that once was the calling card of Luxembourg. That is the reason for a very unusual location of the museum. It is open in a former steel factory. Waassertuerm + Pomhouse also deserves a visit. It … Read more

Luxemburg: Map of sightseeing in regions