The Grand Duchy is rich in places of interest. In Luxemburg, tourists will find ancient palaces, museums and unique nature parks, so an excursion program there will never be boring. The Grand Duchy Palace is a must visit place in Luxemburg. Initially, the building was constructed as a town hall. Later it became a property of the Dutch governor and only in the end of the 19th century the palace got the status of the head of the country’s residence. During the years of the Nazi regime, the palace was used as a venue for concerts and entertainment shows. The majority of artworks that were in the palace were lost during that period. Only after the end of World War II the palace has become the duke’s residence once again. Today, the palace is used for conferences and official ceremonies.
State construction and political life of Luxemburg
Luxembourg became a Grand Duchy in 1815. The Country has a system of constitutional monarchy. All legislation is carried out according to the …
Read further
The Former Castle of the Counts of Luxembourg is an interesting building that is worth attention of travellers. The castle was built on a hill in the middle of the 10th century. In the 10th century it was used as a residence of counts, and later the castle was turned into a protective facility. In 1459, the castle was severely damaged in fire. The fortress was discovered by archaeologists only in 1993. Nowadays, visitors can see a part of the wall and one wing of the castle.
Buildings of the medieval period are not the only sight of Luxembourg. Below modern streets and squares there is a complicated system of tunnels. Construction of the so called casemates started in 1644. At that time the casemates were an important part of protective facilities. The total length of the tunnels estimated 23 km. Many of them were demolished later and only 17 km of tunnels have survived. It’s also worth mentioning that during the Roman Empire times there already was a system of complex underground tunnels and it was later expanded in the medieval period. Copyright www.orangesmile.com
The soul of Luxemburg - religions and languages
Despite the fact that the Duchy of Luxembourg has rather modest territorial dimensions, the legislation simultaneously approved three state languages. …
Read further
Notre Dame Cathedral remains the most famous religious building. This magnificent church was built in the 17th century in a style that can be described as a mix of late gothic style and renaissance. The main symbol of the sanctuary is the statue of Maria. On the days of big religious holidays, the statue is taken out the cathedral and installed on the nearby square. Thousands of pilgrims arrive to the city on these special days, so that they can bow to the statue. Vianden, the home city of Victor Hugo, is often called the most picturesque place in Luxembourg. Tourists will find here cosy streets, parks, squares and charming restaurants. Travellers are also recommended the visit the museum dedicated to the great writer.

In the course of archeological researches, it was found out that the first settlements on the territory of modern Luxembourg appeared over 35 000 years ago. The permanent settlements here started to be formed in the Neolithic period. Archeologists found some parts of old houses, ceramic items, ancient weapons and accessories. The most interesting districts here are Mompach and Dalheim. From the 6th to 1st century BC, there was a settlement of Gauls on the territory of Luxembourg. In the 5th century AD, it was conquered by Franks.
Luxemburg economy - strengths, wealth and problems
Luxembourg despite its modest territorial size is considered a highly developed country and is included in the top rating of the richest countries in …
Read further
The 7th century can be considered as the beginning of the history of the modern country. Local residents were converted to Christianity exactly at this time. In the Middle Ages, the tiny country became a part of different kingdoms. Luxembourg gained independence only in the second half of the 10th century. As a result, it was under Austria and France. In 1815, the country became independent of France and has been keeping autonomy since that time.

In addition to unique historical attractions, Luxembourg is ready to offer its guests a lot of interesting entertainments. It is not a coincidence that it is considered as one of the best countries for hiking. It is almost impossible to get lost here, as there are interesting tourist facilities literally at each step. The country offers wonderful conditions for family recreation. In each small town, there are enchanting parks. In Bettembourg, you can visit Fairy Tale Park. Another beautiful park is located in Mondorf-les-Bains.
Top architectural sights of Luxemburg
Monuments and architectural objects, notable for the history and culture of the country. …
Read further
Luxembourg is known by fans of food tourist as a place of unique wine production. Very interesting themed excursions are organized for the guests. Over hundreds of years, in Moselle Valley, marvelous vineyards are cultivated. There are historical wineries and cellars near them. Here, you can taste popular wines and visit excellent wine stores.

The tiny country offers wonderful conditions for health tourism. In Mundorf, healing mineral springs were found. At present, this is a small town with the population of about 4 000 people. This is also a world-famous resort. It is notable not only for unique mineral springs, but also for healing climate.

This article about iconic landmarks and sights of Luxemburg is protected by the copyright law. You can re-use the content, but only under the condition of placement of an active link to www.orangesmile.com.
Luxemburg guide chapters 1 2 3 4 5 6 7 8 9 10 11 12 13 14 15 16

Castles of Luxemburg
♥   Castle 'Bettange-sur-Mess Castle' . On the map

♥   Castle 'Bettembourg Castle' . On the map

♥   Castle 'Bourglinster Castle' . On the map

♥   Castle 'Brandenbourg Castle' . On the map 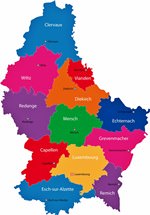 Nearly 60% of the survey respondents had to cancel up to four leisure or business travels in 2020. People had to postpone their plans but didn’t skip them – more than half of the respondents have already rebooked hotels or plan to do this in the nearest future. Family vacations or visits to family and friends are the main reason for people to travel these days. People in all age groups from 18 to 55+ are optimistic about the future of travel and hope that vaccination will allow reopening the borders.

Sightseeing in popular cities of Luxemburg

Luxembourg
Casino Luxembourg. Despite its name, Casino Luxembourg is not a gambling house as one may think. This is the forum of modern art. During a whole year multiple expositions are organized here. Despite their diversity, it is still possible to say that all of them are devoted to modern art. Here visitors will be able to see the most diverse trends and tendencies of the today’s art. The building itself consists of twelve white halls made in the shape of cubes, and the old ballroom. The museum … Read more

Echternach
According to historical data, the first settlement in this area appeared yet during prehistoric times. During the Roman epoch, there was a big villa here. It belonged to a rich noble. Unfortunately, archaeologists still do not know anything about that person. At the end of the 7th century, the town and abbey appeared in the area thanks to the efforts of an Irish monk. A bit later, the first basilica was built here. In the 30s of the 13th century, Echternach officially became a town. Starting … Read more

Dudelange
Local museums are truly unique, and one will hardly find something similar in other towns of the country. For example, Musee National des Mines de Fer Luxembourgeoises is a true present for all fans of unusual places and travelers who enjoy discovering new. It is a marvelous place to get acquainted with local history and culture. Ouvrage Hackenberg and Ouvrage A10 Immerhof is a truly must-visit venue. All fans of fortification facilities will be particularly fond of this museum. Musee National … Read more