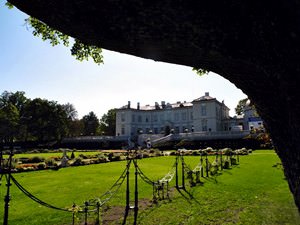 Lithuania is located on the coast of the Baltic Sea and this factor largely influences the formation of the climatic conditions of the state. Summer in Lithuania is relatively cool but the air temperature is quite suitable to travel in. Winter on the other hand is characterized by mild weathers and occasional thaws. The average summer air temperature does not exceed 20°C while the average temperature in winter is 3°C. In general, the climate of Lithuania practically does not differ from that of other European countries unless there is a certain climatic instability in the State. Sometimes, a sunny weather can in a few minutes change to a prolonged cold rain. Quite often there are heavy squeezed air masses in the territory of the country.
Things to do in Lithuania - active leisure
One of the most popular activities in Lithuania is ecotourism. There are 35 national and regional parks in the country; most of them are of special …
Read further
Winter comes in Lithuania according to the calendar. However, it is in December that the greatest temperature fluctuations occur. The temperature varies between -5°C to 5°C. There is a high humidity, which is known to create a damp and dank feeling. Regular gusty winds bring chilly weather from the Baltic Sea. In January, the temperature is more stable; ranging from 2°C to -2°C. A small amount of precipitation is recorded during the month, but snow does not lie on surfaces for a long time. With the onset of February, the weather in Lithuania becomes even milder and warmer particularly around the coast. Most days in February are sunny and there are no sharp changes in temperature. In February also, it snows quite often. It is worth noting that sometimes at the end of winter, the air temperature drops to -15°C. However, such phenomena are not noticed every year.
The month of March is characterized by a sharp warming weather, especially in the coastal regions. The air temperature no longer drops below zero degrees. Nonetheless, it is difficult at this time to experience a comfortable and favorable weather. Variable sea currents provoke strong flurries and precipitation. Despite the fact that the temperature is already above zero, the windy weather creates a rather cold and dank feeling. With the beginning of April, the icy gusts of the piercing wind are replaced with bright rays of sunshine. Notwithstanding, the weather is still quite unstable and heavy clouds can at any time make the weather dull and unfavorable. On average, the air temperature in April varies around 10°C. Only in the coastal areas does the air temperature not rise above 5°C. This is witnessed until the end of April. With the arrival of May, the air temperature warms up even further. On average, it reaches 19°C. The weather in the coastal areas is milder, characteristic of the marine climate. The eastern and continental parts are dominated by the continental climate. Over the entire territory of Lithuania, there is a high humidity, although precipitation falls quite rarely in May. Copyright www.orangesmile.com
What you need to know about Lithuania prior to visit - advices
1.Lithuania is a member of the EU. Citizens of other states will require a Schengen visa to visit the country. 2. The official currency in Lithuania …
Read further
As summer commences, the warm weather becomes even more stable. On average, the maximum daily air temperature is 22°C and at night the temperature can drop down to 11°C. In spite of the fact that the air becomes warm and comfortable, the temperature of the sea water still remains exceedingly low. In the middle of July, there is no exhausting heat in Lithuania and this is due mostly to its location on the coast. Marine air masses often bring coolness and small precipitation. The temperature rises to 23°C in the daytime and 12°C at night. Only in mid-August does the water in the Baltic Sea warm up to relatively comfortable indicators. On average, they vary within the confines of 17°C. The weather becomes stable again at the end of summer. Most days in the month are sunny and precipitation is extremely low. 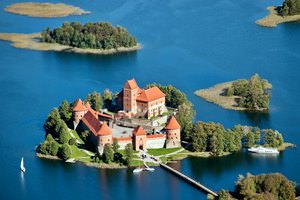 As September begins, the country is visited by rather cold sea cyclones. However, a lot of sunny days are still witnessed. Nevertheless, a clear weather can turn cloudy and damp in the twinkling of an eye. The air does not warm to more than 18°C in the daytime. At night, the temperature drops below 10°C. The month of October displays an actually unpredictable and changeable weather. Sometimes the weather can change several times a day. Precipitation begins to fall more often, and very cold winds blow from the sea. During the day, the air temperature does not rise above 11°C and the maximum at night is 4°C. From November, it rains practically every day. The average amount of precipitation is 60 millimeters. Daytime temperature does not exceed 4°C. During the November nights, the first frosts are seen to appear.

Top periods for vacation in Lithuania 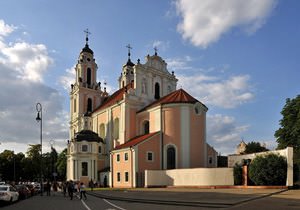 Lithuania is characterized by fairly mild weather. In the coastal regions, there is a prevalence of marine climate. In the center and in the eastern parts however, a continental climate is dominant. Nevertheless, the tourist season lasts almost all year round in this country. The highest season of tourist inflow naturally falls on the warmest season which is from mid-May to mid-September. It is worth noting that due to the sea cyclones that come from the Baltic Sea to the land, there is no exhausting heat, not even in the height of summer. This is what attracts most tourists. During this period however, prices for all standard services increase by about a quarter. A surge in beach tourism is seen at the beginning of August. The swimming season ends in mid-August, when the water temperature drops below 17 degrees. Also, quite a lot of tourists come to Lithuania every year to celebrate the New Year and Christmas. The bulk of them go to Vilnius of course, to enjoy the delightful New Year atmosphere.
When and where to 'hang out' in Lithuania - festivals and celebrations
Over the centuries of its rich history, Lithuania has got many festivals. These are celebrated grandly. Unforgettable festivities are held every …
Read further
Despite the fact that the territory of Lithuania is quite small, it has a huge number of architectural and historical monuments. Consequently, a sightseeing tour is the main direction of modern travelers. Most tourists go on excursions in the summer. To save money, you can visit Lithuania in the beginning of spring or in the middle of autumn, but it is necessary to be prepared for unpredictable weather conditions. It should be noted that Lithuania is an excellent place for the health improvement of a child. On the shore of the cleanest Baltic Sea you will find a huge number of camps, most especially sport camps. They operate only in the summer period, and the duration of the shift most of the time, does not exceed 14-17 days. For the grownups in Lithuania, the most favorable conditions for health improvement at very attractive prices have been created. The health season lasts all year round, but it is preferable to plan a trip between the middle of spring and the middle of autumn, when the weather in Lithuania is as comfortable as possible. 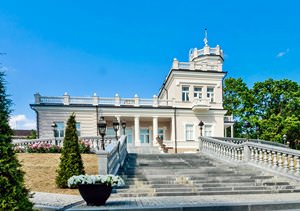 If you want to get acquainted with the local color and national traditions, it is worth visiting at least one of the national holidays. There are a lot of such in Lithuania, after all the country is more than a thousand years old and during this time, there was a huge number of traditions and also, many memorable events took place. The brightest holidays are the New Year and Christmas holidays, the Day of the Three Kings, Epiphany (January 6th), the Day of St. Casimir (March 4th), the summer solstice Jonines (on the night of June 23rd-24th), the Day of the Black Ribbon (August 23rd), the Armed Forces Day of Lithuania (November 23rd), Blukas Festival (December 23rd) and many others. Thus, your vacation can be fully planned for one of their important holidays and imbued with a true Lithuanian identity. Also, travelers should definitely visit the Christmas Fair in Vilnius. It begins on New Year’s Day and lasts for about two weeks. In the beginning of June, there is a very interesting beer festival in Palanga, and the day of the Sea is celebrated in the middle of July in the city of Klaipeda.

1. You can zoom in to Lithuania using the '+' button, or check temperatures around the globe by the '-' button.
2. Besides this, you can grab the map by your mouse button and move it to see the temperature in other regions.

This article about climat and travel seasons in Lithuania is protected by the copyright law. You can re-use the content, but only under the condition of placement of an active link to www.orangesmile.com.
Lithuania guide chapters 1 2 3 4 5 6 7 8 9 10 11 12 13 14 15 16 17
Country maps

Sightseeing of Lithuania in photostream

Vilnius
3. Alcohol can be drunk in specially designated places only. Walking on the city’s streets in a drunken state may also cause large fines. 4. It’s highly recommended to leave tips in local cafes and restaurants, but their sum is up to you. Typically, visitors leave to a waiter no more than one Litas. 5. Dishes in local restaurants are very big, so a standard portion may be enough for two persons. 6. Items made of amber remain the most popular souvenirs among tourists. MAXIMA is … Read more

Palanga
3. The only possible way to pay for goods and services is national currency as any other currency will not be accepted in local shops and restaurants. Though some hotels and inns accept Euro. 4. Currency can be exchanged in one of the local banks. Financial institutions serve customers till 5 – 6pm. Usual days off are considered to be Saturday and Sunday meanwhile Friday can be a shortened working day (usually a few hours shorter). On the premises and in close vicinity to all banks tourists … Read more

Kaunas
3. Fans of hunting and fishing should care about the registration of all necessary documents in advance. Without them any fishing or hunting will be an illegal activity. The papers can be obtained from the administration of any national park or nature reserve. The process will take very little time. 4. A large part of local shops and shopping centers is open every day except Sunday. A usual working day starts at 10:00 and lasts until 19:00. Saturday can be a short working day. Some grocery … Read more

Klaipeda
3. Tourists, who expect to rent a car, need to remember that large monetary fines are collected in case of violation of traffic regulations. In any case you shouldn’t drive in a state of intoxication; such actions are considered one of the most serious crimes. 4. It’s usual to tip in local restaurants and cafes, but there are no specific rules for reward calculating. Visitors usually leave at least 5% of the total order for the waiter. 5. Amber remains one of the most popular souvenirs … Read more

Map of popular regions of Lithuania