Religions and languages in Lithuania 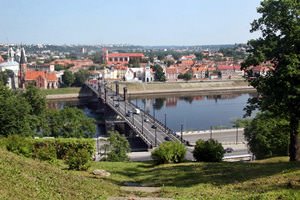 At present, Catholicism prevails in Lithuania. According to the last census, at least 85% of the general population consider themselves Catholics. It should be noted that Catholicism is supported by the Country at the official level. Absolutely all Lithuanian churches and various religious communities, including sects, are considered legal organizations. They have the right to conduct their activities as they see fit, promote their views, manage schools and other educational institutions for the training of priests. At the same time, the church teachings should not go against the morality and legislation of Lithuania. In general, the Country is loyal to the adherents of different religions.
National cuisine of Lithuania - specialties, recipes and restaurants
The local cuisine of Lithuania is the personification of the culture and history of this country. Many centuries ago, it was conditionally divided …
Read further
About ten percent of the local population consider themselves Lutherans. The Orthodox Church is represented by only 45 parishes. At least five dozen parishes were given to the Russian Old Believers. The followers of this faith had come to the territory of the country even at the time of the tsarist persecutions. It should be noted that in Lithuania, throughout the history of the formation of the Republic, there has always been many different denominations. For instance, in the 16th century the Protestant movement was spread. It has been known that in medieval times Jews lived in Lithuania and even right up to this moment, they are gathered in small communities across the territory of the Republic. Also, today in the country you will find small groups of the most widespread religious faiths.
However, recent polls have shown that most citizens of the country are categorically against the appearance of new religious formations on their territory. Activists are seriously fighting the official powers to only recognize official religious communities, for example, Catholics, Orthodox, Muslims and Jews. In past years, religious tolerance has become the ground for the spread of Satanism. Presently, active work is being done to expel this religion from the territory of Lithuania. For years, there have been legal prairies in court between some separate faiths. However, everything is usually solved amicably. At the same time, there is a section in the Constitution about freedom of choice of religion, and the government does not intend to reform this provision. Copyright www.orangesmile.com
National traditions and mentality of people in Lithuania
Lithuania is often called the Northern Italy because of the similarity of inhabitants’ nature. Lithuanians may appear calm and cold-blooded, but …
Read further
The State language of Lithuania is Lithuanian. It is of Baltic origin, therefore, majority of the residents of the Republic (about 86%) believe that it is the Lithuanian language that is ethnically native for them. Seven years ago, the local population had the opportunity declare two native languages ​​at the time of the census. Nevertheless, this opportunity was used only by a few members of the population. Almost all the inhabitants of the country declared only one native language, and in the majority it was Lithuanian. Less than one percent of the population indicated a second mother tongue; more often it turned out to be either Russian or Polish. It should be noted that every 3rd resident of Lithuania according to data for the past year, speaks two or more foreign dialects besides the Lithuanian language. Most of the time, this is a combination of Russian with English or Polish, or a combination of English and German. About 40% of the entire population speaks their ethnic language and another additional on the side. 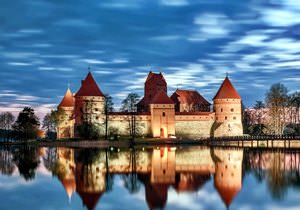 The dissemination of Polish on the territory of modern Lithuania dates back to the 6th century. At that time, it spread through the territory as the officially recognized language of the Roman Catholic Church. Near the capital of Lithuania, Vilnius, there were a lot of Poles and their native language gradually took the lead in all Eastern European countries. But then, in the 19th century its influence fell sharply, and so far the Polish language occupies only the third place in Lithuania, after Russian. It should be noted that the tsarist of the 19th century conducted a serious suppression against the ethnic language of the Lithuanians. It was forbidden to print books in Latin, but in neighboring Prussia, the printing of ethnic Lithuanian literature continued to flourish. During the era of the Soviet Union, the Polish language finally lost its position on the territory of Lithuania and its dissemination ceased. Ethnic Lithuanian on the contrary, developed. Only 10% of Lithuanian citizens considered Russian to be their native language.
Lithuania cultural sights. What to see?
Lithuania is incredibly rich in various historical and cultural attractions. There are two hundred parks, more than fifty reserves, and two and a half …
Read further
The nearest similar language to Lithuanian is Sanskrit. The Latin alphabet is the basis of the Latin language. It should be noted that throughout the years of its existence, this language has repeatedly suffered changes. The language that modern Lithuanians are speaking now began its formation five centuries ago. It was during this period that the first literature printed in the ethnic language was published. On the other hand, you cannot help but believe that now the Russian language is considered to be the second native language. After all, the transmitters of this very ancient language lived on the territory of the republic for quite a long time and their significant domination was just at the era of the Grand Duchy of Lithuania. After the Old Believers began to emigrate gradually, the Russian language spread even in the indigenous Lithuanian territories. Subsequently when the Republic was included in the Russian Empire, the number of citizens speaking Russian increased all the more. 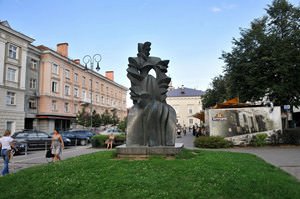 In the modern Republic of Lithuania, a very tolerant attitude was adopted towards the Russian language, as well as the Polish language, and their speakers. In places where these minorities are concentrated, even schools that teach in Russian or in Polish are open. After the country joined the Eurozone, the Russian language suffered a significant decline. It is worth mentioning that in some remote regions, some Lithuanians began to talk over time in a peculiar Surzhyk. In other words, some of the words are taken from the real Lithuanian language, and some are borrowed from the Russian language. As for the tourist movement, Lithuania will be quite comfortable for speakers of different languages. This is true especially if the visitors know English or Russian. In all modern restaurants and high-class hotels, these foreign languages are spoken.

Photogallery of iconic places of Lithuania

Vilnius
In Lithuania and especially in Vilnius, it is strictly forbidden to cross the private premises, marked by special tablets. Lithuanians, though hospitable, do not like unexpected guests. Note that, because this situation can turn into a conflict situation, which can unpleasantly affect the offender. Lithuanians are incredibly polite, cultured, they always show a high level of tolerance. They do not allow themselves to interrupt interlocutors and expect the same from them. Locals are very calm, … Read more

Palanga
Travelers wishing to learn local folk traditions and customs better should visit the city of Palanga in the second part of April. Each year on the 23 of April the city invites its residents and guests to enjoy a bright spring holiday named “Jurgines” which is forerun by an impressive folk festival. Apart from sports, local folks are characterized with passionate love to music as well. The second part of May features several original holidays and fests. A music festival named “Lygus … Read more

Kaunas
This colorful carnival is particularly loved by children, because delicious pancakes and sweets are the main treat of this wonderful event. The carnival is held on the last days of February. Saying “goodbye” to winter is always accompanied by parades, musical performances and funny activities for children. Collective performances remain one of the main features of local culture. Performances of choirs and various dance groups during holidays and celebrations have become a tradition. … Read more

Klaipeda
The modern holiday is impossible to imagine without educational activities. Everyone is welcome to visit fascinating lectures on the most acute problems related to the sea. Events dedicated to the protection of the sea and its inhabitants are also very popular and always find the response from both local residents and tourists. Several museums and exhibitions devoted to the sea theme have opened in Klaipeda. Typically, on the Marine Day entrance to all cultural places of the city is open. … Read more

Lithuania: traditions in the regions