National traditions of Lithuania. Habits, mentality and the way of living 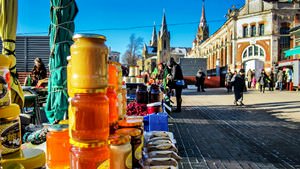 Lithuania is often called the Northern Italy because of the similarity of inhabitants’ nature. Lithuanians may appear calm and cold-blooded, but they can show truly violent emotions. The main qualities that are typical for all Lithuanians are sociability and love for fun. People of all ages enjoy singing and dancing, even those who are far beyond sixty. Locals share an enthusiasm for life and hospitality. They easily converge with new people, always interact with the guests of the country. Lithuanians are characterized by thrift and rationality. They are famous as great fans of arguing and proving their opinion. Another great feature of the Lithuanian temperament is patriotism. Locals are happy to help tourists learn words from their language and can long admire their state.
State construction and political life of Lithuania
Lithuania is a republic of mixed type. The Constitution in the country was adopted in 1992, and after that, it has at several times been subjected to …
Read further
Lithuanians are family people. You can often meet corporations and companies, which consists of members of one family. Lithuanians care very much about what other people think about them. Therefore, they always try to demonstrate the very best side. The people of Lithuania are punctual; they always come to meetings on time and do not tolerate delays.
Smoking in Lithuania is prohibited at the legislative level, except for specially designated places. There are high penalties for violating this rule. It’s also prohibited to drink alcohol in public places. Local law enforcement agencies are carefully monitoring to ensure that these laws are respected. Lithuanians are very law-abiding citizens, so, such a prohibition does not cause special problems. Copyright www.orangesmile.com
The soul of Lithuania - religions and languages
At present, Catholicism prevails in Lithuania. According to the last census, at least 85% of the general population consider themselves Catholics. It …
Read further
It is strictly forbidden to go through private estates, which are marked with special plates. Lithuanians, though hospitable, don’t like unexpected guests. There may be a conflict, which can unpleasantly affect an offender. Lithuanians are incredibly polite and cultured; they always show a high level of tolerance. They do not interrupt interlocutors and expect the same from others. Lithuanians are very calm. They show great respect to the unique nature of their country. Another local feature is helpfulness. Lithuanians always come to each other's aid. Tourists can recon on help. Locals easily tell the direction or even accompany a tourist if they have free time. 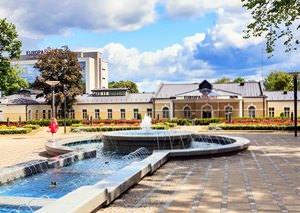 An integral part of the life of any Lithuanian is a song. In ancient times, Lithuania was called the land of songs. The greatest popularity has choir singing and various folk ensembles. In the last week of May, there is a folklore singing festival in Vilnius, which attracts more and more guests every year.
Lithuania economy - strengths, wealth and problems
Lithuania is considered a Republic with an industrial agrarian economy. The development of industry plays the dominant role in the economy as the …
Read further
All significant dates are celebrated on a grand scale. Events are cheerful and noisy. Grandiose processions, fairs, songs, and dances accompany them. Residents of cities tend to show that the old traditions are still alive today. People gladly take part in all kinds of entertainment and necessarily buy souvenirs brought by local craftsmen. On the fairs, you can see gingerbread with biblical texts and household utensils made of straw, as well as beautiful jewelry made of amber.

This article about national traditions in Lithuania is protected by the copyright law. You can re-use the content, but only under the condition of placement of an active link to www.orangesmile.com.
Lithuania guide chapters 1 2 3 4 5 6 7 8 9 10 11 12 13 14 15 16

Castles of Lithuania
♥   Castle 'Panemune Castle' . On the map

♥   Castle 'Raudondvaris Castle' . On the map

Famous sites of Lithuania in pictures

Unique traditions in cities of Lithuania

Vilnius
Residents of Vilnius are family people, and it's not rare phenomena to meet the corporations or firms lead by the members of the same family. They are very much about what other people think about them, and therefore they always try to demonstrate themselves from the very best side. All the Lithuanians are punctual, always come to meetings on time and do not tolerate delays. Moreover, all the significant dates are celebrated on a grand scale here, with bright celebrations and noisy parties. … Read more

Palanga
By the end of winter Palanga witnesses the greatest religious fest of Easter. The holiday is always followed by numerous folk festivals, street performances and various gastronomy events. The main treat of the holiday is pancakes which tourists can try in one of the numerous city cafés serving the treat. Travelers wishing to learn local folk traditions and customs better should visit the city of Palanga in the second part of April. Each year on the 23 of April the city invites its residents … Read more

Kaunas
Local people are very hard-working. This character trait has even found its reflection in the folk art. Most of the songs are devoted to work and labor. Even fairy tales and legends tell stories about brave and hard-working heroes. There are special literature classes in schools, during which children learn ancient myths and fairy tales, so even small kids are familiar with national folklore. Many national holidays are connected with various religious traditions. One of such holidays and one of … Read more

Klaipeda
Traditionally, the holiday begins with a parade of ships on the cruise terminal. Thousands of people gather to watch this incredible spectacle. After a festive procession vacationers are invited to a marine exhibitions, sport competitions and holiday concerts. One of the good traditions, observed on the first day of the celebration, is a ceremony in commemoration of sailors. It is carried out not only in Klaipeda, but also in all European cities where Marine Day is celebrated. The modern … Read more