Nature of Lithuania - national parks and reserves for active recreation 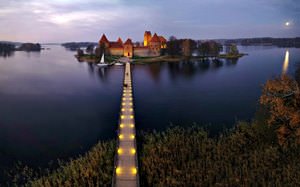 Most of Lithuanian’s territory is covered by plains. The highest point of the country has a height of no more than 300 meters. One of the country's amazing natural attractions is the Curonian Spit. That’s the elongated narrow saber-shaped land that separates the Curonian Lagoon from the Baltic Sea. The Curonian Spit stretches almost 100 km. There is no analog to this phenomenon anywhere in the world. The body of the spit consists of sand dunes. The largest of them exceeds 60 meters; this is one of the highest dunes in the world. The Curonian Spit and its adjoining territories make together a national park. This place is protected by the state. To get acquainted with this incredible creation of nature, you can go on a trip along one of the many hiking trails for tourists. More than 30 species of endangered birds and more than 800 different plant species can be found there.
National cuisine of Lithuania - specialties, recipes and restaurants
The local cuisine of Lithuania is the personification of the culture and history of this country. Many centuries ago, it was conditionally divided …
Read further
The territory of the Curonian Spit National Park has a rich fauna. In the park, you can find elk, wild boar, roe deer, raccoon, beaver, fox, and marten. The Curonian Spit is included in the UNESCO World Heritage List, which makes it even more attractive for tourists and locals. The territory of the park is under very strict control. It’s forbidden to litter or do anything that can harm nature. Another important feature of the geography of Lithuania is a large number of lakes, about 2800. Despite the impressive figure, lakes are rather small and occupy slightly more than 1% of the country's territory. The largest lake, Druksiai, is located on the border with Belarus. Its maximum depth is about 30 meters. The shores of the lake are mostly sandy, so you can sunbathe there. Hostels and recreation centers are open on the shore.
There are lots of rivers in Lithuania. The longest is the Neman with more than 180 tributaries. The river serves as a border with Russia. This water artery is notable for a very picturesque landscape. Another significant river of Lithuania is Viliya. It was very important for people in antiquity. A large number of burial mounds and ancient graves of pagan times were discovered on the shores. According to one theory, the name of the river comes from a word meaning "the souls of the dead." The Venta River is the third largest in Lithuania. It became known due to the famous waterfall, which is the widest in Europe. Its height is small, only about 2.5 meters. However, during the flood, its width can exceed 270 meters. Copyright www.orangesmile.com
National traditions and mentality of people in Lithuania
Lithuania is often called the Northern Italy because of the similarity of inhabitants’ nature. Lithuanians may appear calm and cold-blooded, but …
Read further
There are 30 regional parks and 5 national parks in the country. They are designed primarily to protect the forests. The largest natural protected area - the Dzukija National Park - is in the south of the country, in Dzukija. It was established as part of the program to conserve the Lithuanian pine forests. The place has a very picturesque landscape. Numerous small rivers flow through amazing coniferous forests. There are several villages that you can visit if you want. Another attraction of the park is the Dainava Forest, which grows in the Merkys River basin. There are more than 20 different lakes in this picturesque land. A large number of forest animals live among the pine trees. 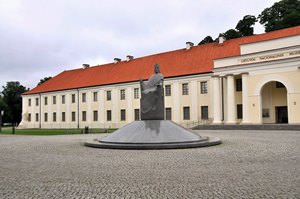 Another fascinating place for excursions and acquaintance with the Baltic nature is the Aukstaitija National Park located 100 kilometers from Vilnius. About 2% of the area of this park is a specially protected zone. It’s allowed to enter it only with a representative of the forest protection service. There are more than 120 lakes and a large number of small rivers and streams, which made the place very popular among fans of active tourism. One of the most picturesque places in the park is Lake Baldosas, which has 7 small islands. There is also a lake in the lake, which is the only one of its kind in the country. Another popular place among tourists is on the hill of Ladakalnis. A tourist trail goes to a place where in ancient times people performed rituals and worshiped pagan gods, in particular, the mother goddess Lada.

Cultural sights in regions of Lithuania

Vilnius
The famous Vilnius Tower is also an important object of excursions. On the ground floor of the tower you will see an exhibition hall, the exposition of which is devoted to the tragic events of January 13, 1991. There are also a restaurant and a beautiful bar in the tower, so during their meal here guests can enjoy panoramic views of the city. Among the architectural monuments of Vilnius we should definitely mention Radvilos Palace, which once has belonged to a noble family. Today the historic … Read more

Palanga
Another interesting landmark of the tourist destination is the Birute Mountain. This place is famous in numerous legends. It is considered that in bygone days local folks kept a sacred fire on the top of the mountain. Few years ago archeologists managed to discover a scale ceremonial shrine on the mountain. A genuine purpose of the shrine is still unknown. In the second part of the 19th century it was decided to build a chapel on the mountain. Its building has perfectly survived till nowadays. … Read more

Kaunas
The House of Perkunas is located nearby. This is a beautiful red-brick building of an unusual architectural form. Originally the house belonged to a merchant cooperative. This part of the city is the location of very important religious landmarks - the Church of the Holy Trinity and Vytautas Cathedral located near the church. These buildings were built in the 15th century and are internationally renowned as beautiful monuments of the Gothic style. Modern districts of Kaunas are also very … Read more

Klaipeda
The equal popularity shares the Blacksmith Museum. Blacksmithing is a national craft and museum exhibits exactly can be called works of art. It’s worth to mention that there is an sales exhibit of works of modern masters in the museum, so everyone can buy a unique souvenir as a memento. A particular attraction of Klaipeda is the Sculpture Park, where the most incredible works of local and international artists are represented. Each year, a collection of sculptures in the park is updated with … Read more

Lithuania: Map of sightseeing in regions