Maps of cities and regions of Lithuania 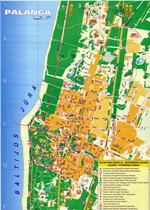 Interactive maps of hiking and biking routes in Lithuania

1. You can zoom in/out using your mouse wheel, as well as move the map of Lithuania with your mouse.
2. This interactive map presents two modes: 'Biking Routes' and 'Hiking Routes'. Use the '+' button on the map to switch between them.


Railway and landscape maps of Lithuania

This Lithuania map has two modes: 'Railway Network' and 'Landscape & Rural Map'. Use the '+' button on the map to navigate.

Maps of cities and regions of Lithuania

Druskininkai
One hundred and thirty kilometers from Vilnius, there is the oldest resort city in Lithuania – Druskininkai. This resort has an impressive size. Many people know about Druskininkai because of its mineral springs and healing mud. The air is this region in incredibly clean, and nature is perfect for a great vacation. Nowadays, the resort is developing actively, and the number of visitors becomes bigger every year. A recent opening of an aqua park made the city’s infrastructure even better. Are … Read more

Vilnius
The Gate of Dawn. The Gate of Dawn was built in the XVI century. Originally, this was a part of the city walls. This is the only gate from the nine city gates of Vilnius that has survived till our days. The top of the gate is the location of a magnificent chapel built by Carmelites. This chapel hosts one of the most important religious objects of Lithuania - the miraculous icon of the Mother of God. The interior of the chapel, built in 1829, is made in the neoclassical style and it deserves … Read more

Palanga
One of the city's landmarks is a pier built in the late 19th century, which is a favorite walking place for local residents and tourists The very first pier built in this place was destroyed a few years after its discovery. Storms often covered the pier with sand, so it had to be regularly rebuilt. The 470-meter-long wharf where people walk today was constructed in 1997. One of the main cultural sites of Palanga is the Amber Museum opened in 1963. The museum is currently housed in a majestic … Read more

Kaunas
Fans of art will like the Ciurlionis Museum, devoted to the work of the famous artist and composer. In this museum, which was opened in 1921, an interesting collection of paintings is presented. Here, you can see diaries, manuscripts and belongings of the famous artist. In recent years, the museum's exposition has expanded significantly. Currently, it presents a collection of wooden sculptures of the 19th century, as well as handicrafts and folk art. Vilniaus Street remains a popular … Read more

Klaipeda
The iconic historical symbol of the city is Klaipeda Castle. It was built by Teutonic Knights. For many years, the castle was in desolation. In the middle of the 20th century, it was located on the territory of a large industrial zone and was not accessible. In 1968, the restoration of the castle began, and continues today. Archaeological excavations are still conducted on its territory. In 2002 an interesting museum was opened in the castle walls, where you can see not only the discoveries of … Read more

Klaipeda Region
In the northern part of the region, vacationers will find two absolutely charming beaches – Giruliai and Melnrages. Despite the fact that cool Baltic water becomes warm enough to swim only in the midst of summer, these beaches are always very popular with tourists regardless of the temperature of water. People come to relax among sand dunes and beautiful pine groves. In summer, numerous beachside entertainments are available to vacationers. Klaipėda regularly hosts a number of interesting … Read more