Sightseeing in Vilnius - what to see. Complete travel guide 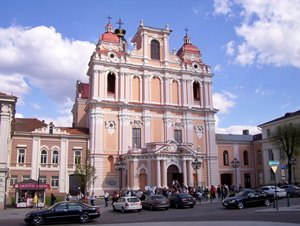 Thanks to numerous baroque buildings, arcades of narrow medieval streets, hidden small squares, towers and castles, as well as a large number of Orthodox and Catholic churches, the Lithuanian capital that stands on the river Neris, is distinguished by a special, unique atmosphere. Vilnius is primarily known as a city of hundreds of churches. Here one will find some truly magnificent works of architectural art. The center of the city itself has more than 30 churches! No wonder that the historic part of the city with its unique charm is protected by UNESCO.
Shopping in Vilnius - main shopping streets, outlets and boutiques
Many fans of shopping set Akropolis as a primary destination in Vilnius. This is a large and popular shopping complex in the center of the capital that is perfectly suitable for both …

is a spiritual and political center of Lithuania. The first Christian church on the site of the cathedral was built by King Mindaugas soon after his conversion to Christianity. The history of the modern building was started in the XV century. During its centuries long history the cathedral has survived in numerous fires and has undergone numerous reconstructions. The inner premises of the cathedral simply strike with their splendor – this is the place where you will find paintings, tombstones, sculptures of Lithuanian princes and kings of Poland, artworks of the XVI-XIX centuries, and even the museum, the exhibition of which is dedicated to the history of the cathedral starting from its construction to the present day. The Cathedral has also become the tomb of a number of important historical figures. Its underground tombs date back to the XII century. The 57 meter tall bell tower of the building that stands separately was built on the site of the former defense tower.
The Church of St. Anne.
The Church of St. Anne of the XIV century

is one of the most beautiful buildings in Vilnius. This is a true masterpiece of the late gothic period, and only several churches in the world can compare with its beauty. Many years ago a wooden church stood here. It was built in the XIV century by order of the wife of Vytautas, the prince of the Grand Duchy of Lithuania. Originally, the Church of St. Anne was a part of the defensive system of the city. This church is mostly known for an unprecedented number of luxuriously decorated tombs. According to a legend, the church impressed Napoleon so much, that he even wanted to move it to Paris. Copyright www.orangesmile.com
Top touristic routes around Vilnius: architectural sightseeing and landmarks
Discovering the architecture of Vilnius from bird's eye view! Vilnius Cathedral, St. Teresa Church, Vilnius TV Tower, Vilnius railway station, St. Nicholas Church, all those monuments are defining the image of Vilnius …

is the oldest university in Eastern Europe. It was founded by Stephen Báthory after he had become the king of the Polish-Lithuanian Principality in the XV century. During its long history of more than four centuries Vilnius University went through periods of prosperity and recession, it was closed and then got back to life again. Various buildings of the university complex occupy almost an entire block in the center of the city. The complex is also home to the Church of St. Jan and the oldest library in Lithuania. The library keeps approximately 180,000 rare books and journals, the oldest of which date back to the XV century. There books from Lithuania, Poland, Russia and other countries. 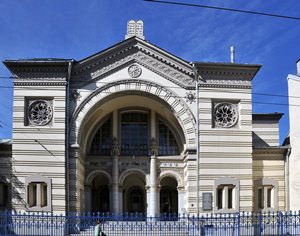 was built in the XVI century. Originally, this was a part of the city walls. This is the only gate from the nine city gates of Vilnius that has survived till our days. The top of the gate is the location of a magnificent chapel built by Carmelites. This chapel hosts one of the most important religious objects of Lithuania - the miraculous icon of the Mother of God. The interior of the chapel, built in 1829, is made in the neoclassical style and it deserves a special attention. The Gate of Dawn attracts numerous Catholics from around the world who believe in the healing power of the Mother of God.
Cultural vacation in Vilnius - fantastic architecture and monuments
St. Anne Church, Gediminas Tower, St. Peter and St. Paul Church, as well as many others, they all become the world's cultural heritage objects and remain as iconic monuments for Vilnius …

is the most important Orthodox church in Lithuania. Here visitors will see great icons that originally belonged to the Order of the Dominicans. Later, the church was changed and some features of baroque and even rococo appeared in its design. The interior of the church, made mostly in the Baroque style, is characterized by a large number of gold and silver details and a beautiful green altar with the multicolor font. The Church of the Holy Spirit is the location of relics of the three Orthodox holy martyrs - Anthony, John and Eustace. In 1347, they were hanged by the Lithuanian pagans because they had refused to eat meat during Lent. The Church of St. Theresa

, built in 1650, is located right behind the Church of the Holy Spirit. 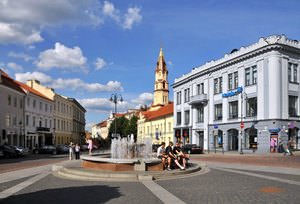 The City Hall.
In 1387, Vilnius received the city rights from the Grand Duke of Lithuania and the Polish king Jagiello. The building of the Town Hall was started a bit later. First mentions of the city hall appeared in 1432. The contemporary classical building appeared in the XVIII century. In 1845 – 1924, the complex housed a theater, and until 1991 the hall hosted the exhibition of the Museum of Art. In 1998, the building was given to the city, and today, by decision of the Vilnius government, the City Hall

is used for representative celebrations.
Family holidays with kids in Vilnius. How to entertain your child, things to show to children.
Many landmarks in Vilnius are incredibly popular with families, and Bernardinai Garden is one of such places. The garden is a magnificently beautiful place that is located in a picturesque …

is a symbol not only of Vilnius, but also of the Lithuanian state. There is a beautiful story connected to it. According to a legend, the city of Vilnius was founded in 1320 by Grand Duke Gediminas after he had seen a dream on this site. The duke ordered to build a wall, towers, castles and houses on a hill. This is how Vilnius was founded. Only one tower and the ruins of the Upper Castle have survived till our days. First restoration works started here only in 1930. Nowadays, the Gediminas tower hosts a branch of the Lithuanian National Museum, the exhibition of which is dedicated to the history of the city. The modern funicular road will bring you to the top in just 30 seconds. There, on the observation deck of the tower, visitors will be able to enjoy breathtaking views of the city. It is also possible to get to the top on foot. In this case you will have to go up to the 78 stair steps.

This guide to iconic landmarks and sights of Vilnius is protected by the copyright law. You can re-publish this content with mandatory attribution: direct and active hyperlink to www.orangesmile.com.
Vilnius - guide chapters 1 2 3 4 5 6 7 8 9 10 11 12 13 14 15 16

Shopping streets in Vilnius
♥   Shopping area ' Gedimino prospektas' Vilnius, 2.9 km from the center. On the map

Survived castles around Vilnius
♥   Castle 'Vilnius Castle Complex' , 1.7 km from the center. On the map

National and city parks around Vilnius
♥   State Park 'Pavilniu regioninis parkas' , 2.1 km from the center. On the map

♥   State Park 'Traku istorinis nacionalinis parkas' , 24.9 km from the center. On the map

♥   State Park 'Neries regioninis parkas' , 27 km from the center. On the map

Search touristic sites on the map of Vilnius

Sightseeing in regions nearby Vilnius

Kaunas
Probably, only Vilnius can be called a competitor of Kaunas as in this city you will find as many historical sights and signature places, as in the capital of the country. The old part of the city hides numerous buildings referred to 20s-30s of XX century, numerous cathedrals and churches, and the main sight of the city - Kauno pilis. The beauty of architectural facilities is ... Open »
Druskininkai
One hundred and thirty kilometers from Vilnius, there is the oldest resort city in Lithuania – Druskininkai. This resort has an impressive size. Many people know about Druskininkai because of its mineral springs and healing mud. The air is this region in incredibly clean, and nature is perfect for a great vacation. Nowadays, the resort is developing actively, and the number ... Open »
Daugavpils
On the bank of the biggest river in Latvia, the Daugava River, tourists will find the second-largest city in the country – Daugavpils. Upon arrival in this settlement, many travelers notice that it still has architectural landmarks and buildings that unleash the heroic military past of the region. On top of that, Daugavpils is a large city with well-developed infrastructure ... Open »
Minsk
The ancient city with an interesting history, Minsk is famous by numerous cultural centers and great atmosphere that is perfect for relaxed rest. Minsk was almost completely destroyed during the Second World War; today only several buildings of the 17th century belong to the oldest architectural monuments. All other monuments have been destroyed. However, there are truly many ... Open »
Bauska
Bauska has prepared many interesting attractions for its guests. This is a charming town situated approximately 70 kilometers from Riga and not far from the border with Lithuania. The peaceful settlement never ceases to attract tourists with its exceptional natural beauty. Bauska is also famous for its interesting history that is intertwined with important personalities from ... Open »
Bialystok
Bialystok is built on the territory, which has been owned by Mazovetsky princes. Starting from the 30s of the 19th century this place began its quick developing. Among leaders were textile and wool industries. Today these are the main sources for the town’s budget. There are several hundreds of architectural and historical sites in the town. Many of them are included into ... Open »

All about Vilnius, Lithuania - sightseeings, attractions, touristic spots, architecture, history, culture and cuisine. Prepare your trip together with OrangeSmile.com - find out the 'must see' things in Vilnius, which places to visit, which excursions to take, where the breathtaking views are waiting for you. Planning your trip with this travel guide will help your to get the most out of Vilnius in few days.