Detailed hi-res maps of Vilnius for download or print 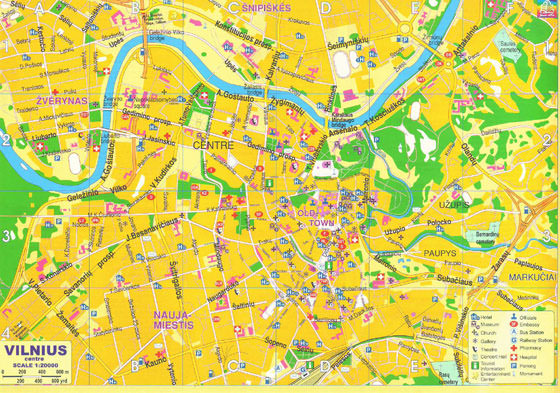 Moving around in Lithuania - transportation

Bicycles are becoming more popular every year, not only among the local population, but also among tourists. This is an ideal option for traveling within a city. First of all, you can rent a bicycle in any city. Secondly, the price for renting is affordable even for a budget constrained vacation. Thirdly, you would be better off using a bicycle since it allows you to avoid suffering from huge traffic jams in the downtown and get to the desired destination as quickly as possible. Fourthly, you can save on parking, as free parking is often provided for bicycles. You can travel on such a two-wheeled transport even between cities. The authorities of the country regularly improve and expand the bicycle intersection. In order to return the bicycle, it is not necessary to take it back to the exact agency. It is enough to simply leave your bicycle at another rental point, even if it is located in another city. … Open

At least 20% of the able-bodied population is employed in the Agricultural Sector. More than half of all the free lands of Lithuania were allocated to agricultural lands; about 40% are occupied by arable land. At the same time, the country is engaged in land reclamation and drainage of marshes annually. You will find the most fertile soils situated in the center of the country. The best area was given to the cultivation of barley. They also grow wheat, oats, beans, potatoes, sugar beet and perennial grasses. The main direction of livestock is the production of dairy products and bacon pigs. There are five large poultry farms in the country, and fishing is also developed. Mirror carp, crucian carp and bream are raised. In freshwater rivers, you will find crayfish, most of which are exported to the Russian Federation. … Open

Search for services, infrastructure and sights on map of Vilnius

Our guide chapters over Vilnius

9. Local hotels do not have a strict "star" classification, so you definitely need to clear out the nuances you are interested in and discuss the range of services before you check-in. 8. During a car ride make sure you have fastened a seat belt. This also applies to the passengers sitting behind. Any non-compliance of this rule can result to a large fine. Driving drunk will also cause a large … Open

If you are looking for new impressions, a tour to Lithuania will give an opportunity to admire one of the most beautiful cities in Europe - Vilnius from a bird's eye view. Just do not be scared and go on a fascinating journey in a hot air balloon. A similar service is offered by several companies, which can be found in the downtown. You can gather the group of maximum eight people and conduct the flight for one hour … Open

Weekend in Vilnius in original style

One of the most wonderful places in Europe, its geographical center to be precise, is located in Vilnius suburbs. On maps, this place is marked as Europos geografinis centras. The exact location of the Europe’s center was calculated by French scientists in 1989. Thanks to locals, this ordinary place close to the A14 highway has become a true landmark of the region. Nowadays, there are a small square and a … Open

Festivals and events in Vilnius

Street Music Day takes place every spring and gathers talented professional musicians as well as amateurs in Vilnius. This event can be described as a cocktail of rock, classics, avant-garde, jazz, folklore and street jams. If you are a great fan of wine then you must visit Wine Days, held annually in Vilnius since 2005. The entrance fee is about 15 euros per a person, but after this, you are free to taste Bacchus … Open

Fans of relaxing in picturesque places will be in love with Stikliai Palace Residence. This apart hotel is open in a beautiful historical building, the façade of which is covered with crawling plants and flowers in summer. Without a doubt, the silent inner yard is the most romantic place in Stikliai Palace Residence. It looks particularly fabulous in summer because of blooming flowers. The interiors are mostly done … Open

Hotels with history of Vilnius

Tvirtove prie Didziulio is located in Vilnius suburbs. The hotel is open in a magnificent medieval castle. Just a couple of steps separate the hotel from the shore of Didziulio Lake. It takes only 15 minutes to reach the central part of Vilnius from the hotel. The design of guest rooms is a doubtless advantage of Tvirtove prie Didziulio. Charming wooden, stone, and marble décor together with handmade wooden … Open