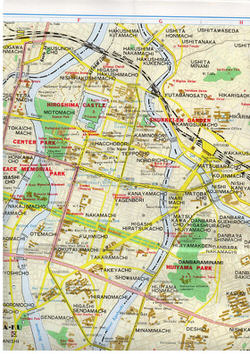 Interactive maps of hiking and biking routes around Hiroshima

1. You can zoom in/out using your mouse wheel, as well as move the map of Hiroshima with your mouse.
2. This interactive map presents two modes: 'Biking Routes' and 'Hiking Routes'. Use the '+' button on the map to switch between them.

This Hiroshima map has two modes: 'Railway Network' and 'Landscape & Rural Map'. Use the '+' button on the map to navigate.

Our guide to Hiroshima

Another interesting cultural center is the Ebayama Museum of Meteorology that will certainly impress tourists with children. It is the first museum that is devoted to meteorology. The excursions around it may be really exciting. Here, the visitors will know how to perform different meteorological measurements. The guests can even test many museum exhibits. For small children, there is a special … Open

7. Shoppers should be aware that bargaining is not accepted in local shops and markets. In some large shopping malls you can pay with credit card, but it’s better to clarify rules of the particular center in advance. 8. It is convenient to travel around the city by public transport; bus is the most popular mean of transport. At any time of the day you can use taxi services, but their tariffs remain high. … Open

It differs from the popular Italian treat with a special composition of the filling, as well as an original way of cooking. The flatbread is fried a little, than the filling is spread. The filling includes mix of vegetables, meat, cheese, eggs, udon and seafood. After being fried thoroughly, bread is turned and fried on the other side. In local street cafes and restaurants okonomiyaki is cooked with a variety of … Open

Hikers would like the Hijiyama Park; the vast part of its area is occupied by the dense forest and there are lots of tracks to walk. Nature lovers should visit the Hiroshima Botanical Park with a large collection of tropical plants. The amazing Asa Zoo, which became home to dozens of animals from all over the world, operates in Hiroshima. It is inhabited by elephants and giraffes, panthers and tigers; every day, … Open

Nearby is the Hiroshima National Peace Memorial Hall, which has been a permanent venue for various special occasions for many years. The famous Genbaku, the sight of world importance, is situated here. This beautiful building has miraculously survived the bombing. In memory of local children being victims of the bombing the Children's Peace Monument was opened. It is a beautiful monument dedicated to Sasaki … Open