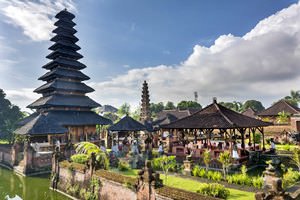 The city's main attraction is Puputan Square, which has witnessed many significant historical events. It was on this square that the local raja committed suicide in 1906 when a protest action that began in the country put an end to a long colonial period. Today, beautiful Catur Muka Statue depicting the formidable four-faced guard rises in the middle of the square. This statue is very important, as it is installed in the exact geographical center of the city.
Cuisine of Denpasar for gourmet with top restaurants and cafe
National cuisine could only be described as piquant and exotic. Popular national dishes may seem especially unusual to travelers who are used to the European type of food. The abundance of …

Open
Puputan Square is the main venue for all public events and celebrations. During the Bali Arts Festival, it is here that colorful street parties and performances of local groups are held. Not far from the square is the city's main cultural institution - the Bali Museum. Founded in 1910, it stores unique collections of ethnographic and anthropological exhibits.
Walking through the museum's numerous halls, visitors can see interesting ritual accessories, national costumes, decorations, handicrafts and household items that once belonged to the first settlers. The most valuable is the collection of archaeological exhibits dating back over two thousand years, according to scientists. Copyright www.orangesmile.com
Authentic traditions, festivals and lifestyle of Denpasar inhabitants
Denpasar is a colorful, multiethnic city where every traveler can feel at home. There is always a very lively atmosphere here, on the streets you can see emotionally chatting citizens whose …

Open
The most important religious landmark and unique architectural monument is Pura Maospahit, a Hindu temple whose construction was completed in the middle of the 14th century. The style in which the temple was built is strikingly different from traditions that were typical for the early Middle Ages. On its walls one cannot see traditional carvings and paintings, however, the temple has several cozy courtyards. They are adorned with ancient statues of mythical creatures, and in the very center of the temple, there is a hollow tree trunk that serves as an alarm. 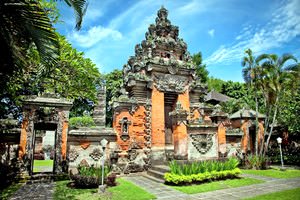 To the east of the city center is the famous cultural center Taman Budaya, which is occupied by an art gallery and several concert venues. Interesting cultural events, dance and music shows often take place within its walls. If during the daytime an entertainment program consists of walking around interesting historical sites and cultural institutions, then at nightfall, Kumbasari night market becomes the main place of interest. Besides countless stalls, here you can find a lot of attractive gastronomic establishments.

In the section below, you can get one of our excursion, activities or city discovery tours over Denpasar and surroundings. Our website offers 10-30% lower ticket prices, when compared to the offline purchase on the spot.

City tours, excursions and tickets in Denpasar and surroundings

This guide to cultural sights Denpasar is protected by the copyright law. You can re-publish this content with mandatory attribution: direct and active hyperlink to www.orangesmile.com.
Denpasar - guide chapters 1 2 3 4 5 6 7 8 9 10 11 12 13
Reference information
Map of all palaces

Public palaces near Denpasar
♥   Palace 'Puri Agung Denpasar' , 0.1 km from the center. On the map

Unique spots in Denpasar and near 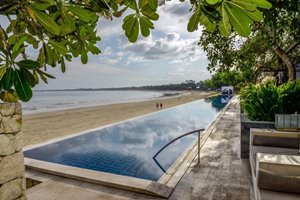 Distance from Denpasar center - 16.2 km.
Hotel Sundara is notable for its water design in general, and the longest swimming pool on the island is far from its only feature. On the territory of the hotel, there are villas with individual pools, there is a special pool for children with fountains, and on the territory of the hotel, you can see artificial ponds with fishes. The beach, which is located near the hotel, is also suitable for a comfortable stay, it is covered with soft light sand. … Read further 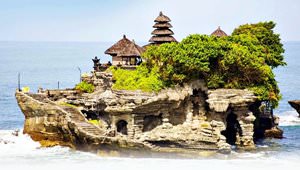 Distance from Denpasar center - 14.9 km.
It’s great to admire the amazing temple, which was built in the 15th century, from a distance. It looks unique together with a rocky island. Tourists who want to take the sight from a closer distance, are allowed to go to a rock by a narrow isthmus. That can be done only during low tide. Only worshippers go directly to the temple and get inside. Not far from the temple of Tanah Lot there are other amazing temple complexes that attract curious travelers. … Read further 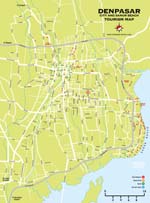 Photogallery of cultural heritage of Denpasar

Excursions over cultural sights of neighbours of Denpasar

Bali
Reptile Park also offers its visitors to see a unique collection of animals brought from different parts of Indonesia. Especially for visitors of the park, the local staff organizes exotic shows, during which you can watch feeding of snakes or crocodiles fighting. A walk on the Balinese forests can also turn into a true adventure, because monkeys are the main inhabitants of ... Open »
Lombok Island
Another important landmark of the island is the villages of aboriginals, who live according to the precepts of their ancestors. The Sasak people make pottery, weave, farm, and spend their free time the way their forefathers did centuries ago. Visiting their territory, any traveler will dive into the past of not only Lombok, but of all mankind. Because this is the way all our ... Open »
Surabaya
The Monkasel museum is an interesting cultural venue housed in the Soviet submarine. It has been in the inventory of the country since 1962; in 1990 it was decided to convert it into a submarine museum. During a tour of the museum visitors would listen about the structure of the submarine and the principles of its operation. It would be interesting for both adults and younger ... Open »
Java
One of the most famous and interesting religious sites located in the immediate vicinity of Jakarta is the beautiful temple of Borobudur. It is known to modern travelers as Temple of a Thousand Buddhas. It is one of the most amazing sacred places of the island featuring an abundance of unique artifacts and exquisite design. The largest temple complex on the island is ... Open »
Bandung
Continue your acquaintance with the local architectural landmarks by making an excursion to the building of the Dutch India Company. The facade of this mansion is made in the best traditions of the Renaissance style. The inner decoration of the house is reminiscent of design of ancient Moorish palaces. Among other attractions of the city we should definitely mention the Great ... Open »
Jakarta
Museum Taman Prasasti is a peculiar excursion destination. The museum’s collection consists of gravestones and old funeral carts. This open-air museum was founded on the site of an old Danish cemetery. The cemetery was founded in the 18th century and was used to bury nobles and rich people. Soon there was no more free space on the cemetery and everybody forgot about it. Only ... Open »

Culture guide to Denpasar. Which fascinating sights to visit once you are in Denpasar: temples, churches, museums, theaters and castles. Recommendations (with addresses, phone numbers and links) on the places 'must visit' in Denpasar. Plan your own city excursion by using this page info!