Sightseeing in Semarang - what to see. Complete travel guide 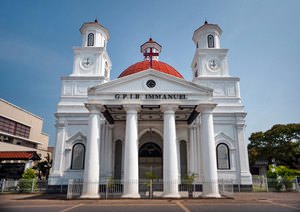 Semarang is a city situated on the northern coast of Indonesia, in the heart of Central Java Province. This city harmoniously combines old colonial buildings built during the medieval and the modern part, which is full of luxury hotels and high-class places of rest.
Currently Semarang is quite an important trading center of the country. Closer to the west of its territory are located several industrial and rapidly developing sectors such as food processing, ship repair, engineering, woodworking, and electrical engineering. The headquarters of British American Tobacco Company are located here as well.
The old part of the city attracts visitors by its Dutch architecture that is cherished and appreciated by the local residents. Beautiful Arab and Chinese quarters are also kept in great condition. Among the major monuments of the Chinese culture present in Semarang is Sam Po Kong Temple. Other attractions that traditionally attract tourists are the old Protestant church named Blenduk, Holy Rosary Cathedral and Semarang Cathedral. You may also enjoy visiting the monuments dedicated to heroes of Indonesia and Youth, which are located in the historic part of the city. The central square of the city is named Simpang Lima. It always attracts lovers of night life. Don’t leave this place without visiting Taman Budaya Raden Saleh – this beautiful garden is located just nearby. The city is also famous for its handicrafts, the most popular of which are manufacturing of various musical instruments, woodcarving and batik production. Copyright www.orangesmile.com
The beautiful Masjid Agung Mosque is considered one of the most majestic architectural monuments in the city. It is very large. The one hall only can accommodate up to 16000 people at a time. This magnificent mosque is a real center of culture and leisure, available to all travelers. The Museum of Islamic Culture, as well as a cafe, and several souvenir shops are found on its territory. Outside the mosque, is a beautiful developed square. At certain times of day, huge mechanical umbrellas are opened there. They protect people from the burning sun. 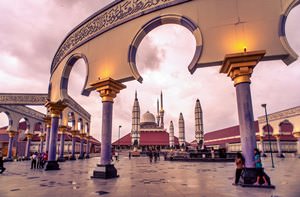 Gedung Lawang Sewu ancient colonial mansion is situated in the very center of the city. Tourists know it under the unofficial name of Thousand Doors. It has a really complex structure. You just can't count all the number of doors, windows, and arches exactly. During the tour, visitors will learn a lot of exciting and terrible secrets. If you believe local residents, the mansion is inhabited by ghosts. They even organize special night excursion for those who wish to personally check this fact.
The Purbakala Archaeological Museum is a great sightseeing object. It presents a unique collection of archaeological finds discovered in the city and the surroundings. Some artifacts date back to the Paleolithic times. The very building of the Archaeological Museum is also of great historical interest. 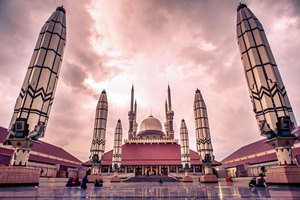 Lovers of natural attractions will not be bored, as well. In Semarang, they can visit a beautiful Taman Djamoe Indonesia landscape park. Each year, it is decorated with new landscape compositions. You can enjoy beautiful flowers and rare plants or watch the birds. The picturesque park has long become home for them.
Wonderful hiking tours are organized in the mountainous area of Ungaran. Historically, extensive tea and jasmine plantations have been formed here. Now, they are popular sightseeing objects. At particular times of the year, tourists are engaged in tea and jasmine gathering. They can also visit local historical factories and watch the preparation of high-quality tea process. The mountainous region is incredibly beautiful and attracts not only tourists but photographers from all over the world.
This guide to iconic landmarks and sights of Semarang is protected by the copyright law. You can re-publish this content with mandatory attribution: direct and active hyperlink to www.orangesmile.com.

City tours, excursions and tickets in Semarang and surroundings

National and city parks around Semarang
♥   National Park 'Gunung Merbabu' , 54.4 km from the center. On the map

♥   Nature Recreation Park 'Tanjung Belimbing' , 86.7 km from the center. On the map

Sights around Semarang from our guide 'Extreme places on Earth' 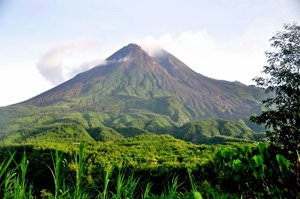 Distance from Semarang center - 63.9 km.
Locals live there for the fruitful volcanic soils. The agricultural industry is quite popular and profitable. Farmers reap the harvest several times per year. Tourists like the picturesque nature and the unique archaeological areas where were found ruins of the ancient towns. Every eruption of Merapi Volcano puts in jeopardy of existence not only natural and historical monuments but also the existence of the Java island. … Read further

Search touristic sites on the map of Semarang

Sightseeing in regions nearby Semarang

Java
Pagandaran located on the shores of the Indian Ocean is considered the best destination for fans of beach sports, diving and spearfishing. Perfectly equipped beaches, sports equipment rentals and numerous diving schools (including those designated for children) make Pagandaran perfect for a family holiday. Unforgettable walks around tropics and historic sites, entertainment ... Open »
Surabaya
Mesjid Ampel Mosque is surely the main religious attraction of this place. This mosque was built in the 15th century. There is a spacious observation deck near the building. It offers magnificent views of the city. It is always worth making a tour to Kalimas Old Port, where you can see wooden models of ships, which were built six centuries ago. Besides this restaurants and ... Open »
Bandung
The resort will perfectly fit travelers, who enjoy nightlife. When darkness falls to Bandung, tenths of night bars and discos lure visitors by their bright signs. The most famous are “Northern Sea” club, “Braga” bar, and “Caesar Palace” discotheque. Beach rest fans should consider visiting Anyer beach, where they can rent a boat and take a ride to magnificent cays ... Open »
Jakarta
You may also enjoy visiting Taman Prasasti Museum, which exhibition is devoted to gravestones. This is a relatively big complex under the open sky, which has been opened in the site of the former Dutch graveyard. In 18th century many noble and rich people were buried here, so many gravestones were true pieces of art created by famous sculptors. Jakarta’s port is another ... Open »
Bali
Inexpensive service is one of the biggest advantages of Bali, however, low price here comes with highest quality. You will be truly amazed by prices in many restaurants and chains of shops. Wild nature fans will have an opportunity to walk on spacious tropical gardens, see rice plantations, volcanoes and untouched jungles. If you prefer visiting historical sights, then you ... Open »
Kuta
Legian is another coastal area that is suitable for beach recreation. Situated just north of Kuta, Legian is less crowded. If you are searching for high waves, Legian will not disappoint you. Soft white sand and a comfortable area for swimming only add popularity to this beach. There are sun umbrellas and loungers available for rent. When planning to visit Legian, ... Open »

All about Semarang, Indonesia - sightseeings, attractions, touristic spots, architecture, history, culture and cuisine. Prepare your trip together with OrangeSmile.com - find out the 'must see' things in Semarang, which places to visit, which excursions to take, where the breathtaking views are waiting for you. Planning your trip with this travel guide will help your to get the most out of Semarang in few days.